in the Semitic languages, paragogic letters are what scribes add to the ordinary forms of words in order to express some additional emphasis and/or some change in the sense.

For example, in the Masoretic Text of 1 Sam 2:22 two paragogic nuns appear, which are highlighted in red, below. (Please click the image to enlarge.) The English translation comes from the NASB.

Many, many Hebrew scholars have written on the significance of the paragogic nun. For example, Waltke and O'Connor (1990) write the following -

Further, there are a variety of forms with nun either between the stem and suffix (the energic forms) or after the stem (the forms with paragogic nun); these forms, too, reflect an earlier stage of the language. As in other languages the subjunctive, energic, and paragogic forms are used in syntactically complex constructions, though the contrast with declarative verbs is now often obscure. . . . Certain features of Hoftijzer’s study of the paragogics deserve note. He is clear that while the paragogics may mark “contrastivity,” their absence does not signal the absence of the feature; rather, it leaves the matter open. The substance of contrastivity involves “exceptions to normal practice, contradictions, deviations from normal expectation, . . . [and] statements…which are contrary to the wishes…of other people.” The pattern of contrastivity that he discerns in prose texts is generally less clear in verse, prophetic or not. In poetry the paragogics mark, among other things, contrastivity or certainty; and they also mark that a volitional sense is excluded. Though Hoftijzer does not discuss the matter, it is reasonable to suppose that poetic syntactic patterns make a feature such as contrastitivity difficult to recognize. 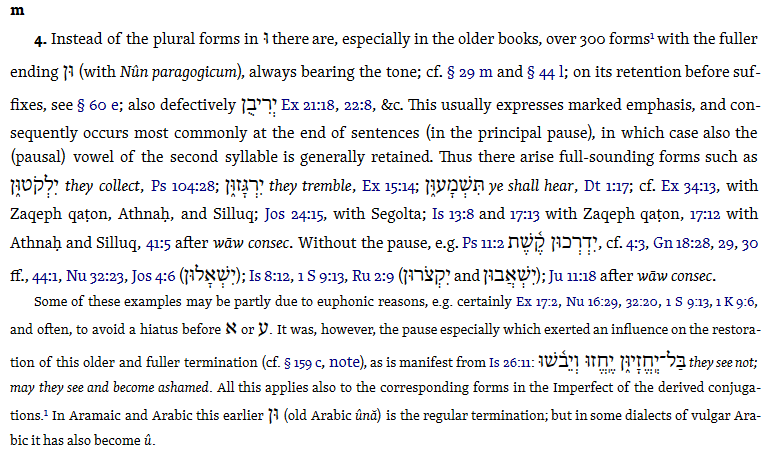 In other words, there appears to be any number of reasons -- be they grammatical, syntactical, emphatical, morphological, or even semantic.

But why, unlike any other place in the Hebrew Bible, does this particular paragogic nun appear twice in the same verse, where the accents, consonants and cantillation marks are different on both words? No commentary or Hebrew grammar mentions this specific verse as an example or as an explanation.

What hermeneutical significance do these two paragogic nuns have in this verse?

The following explanation provides one tentative view based on Jewish oral tradition. That is, the Babylonian Talmud provides one possible explanation as to why there are two paragogic nuns in this verse.

First, the editors of the Masoretic Text finalized their written work during the Ninth and Tenth Centuries of the current era. Their legacy is not only the documentation of the system of accents and cantillation, but their thorough indexing of the Biblical texts as well, which we term the Massorah. Gérard Weil (2001), who translated the Massorah at the request of the editors of the Biblia Stuttgartensia Hebraica, had written the following regarding the Masoretes and their legacy -

[In the study of the Biblical text, the Massorah is the most significant outcome to have emerged from several generations of teachers and scholars ever known by the Synogogue. More than ten centuries of faithful research are deposited in the margins of the manuscripts and between the columns of the books like the sediment on the sea floor, successive layers of knowledge acquired in the schools of the Bible. An immeasurable number of hours of study by day and, how much more, vigils by night were devoted to the preservation, authentication and transmission, if not to the knowledge of text.]

Weil acknowledged that the Masoretes approached the Biblical Texts through the lens of Jewish tradition. They lived and worked at the time when the Jewish Talmud was already in its final stages of completion. One contemporary of the Masoretes was Rabbi Shlomo Yitzchaki ("Rashi"), who lived in France, and whose legacy and commentary form part of the Jewish Talmud as known today. Thus the oral tradition of the Talmud provided the foundation of the Masoretes as they approached the Biblical Texts. Kelly et al. (1998) note the following. 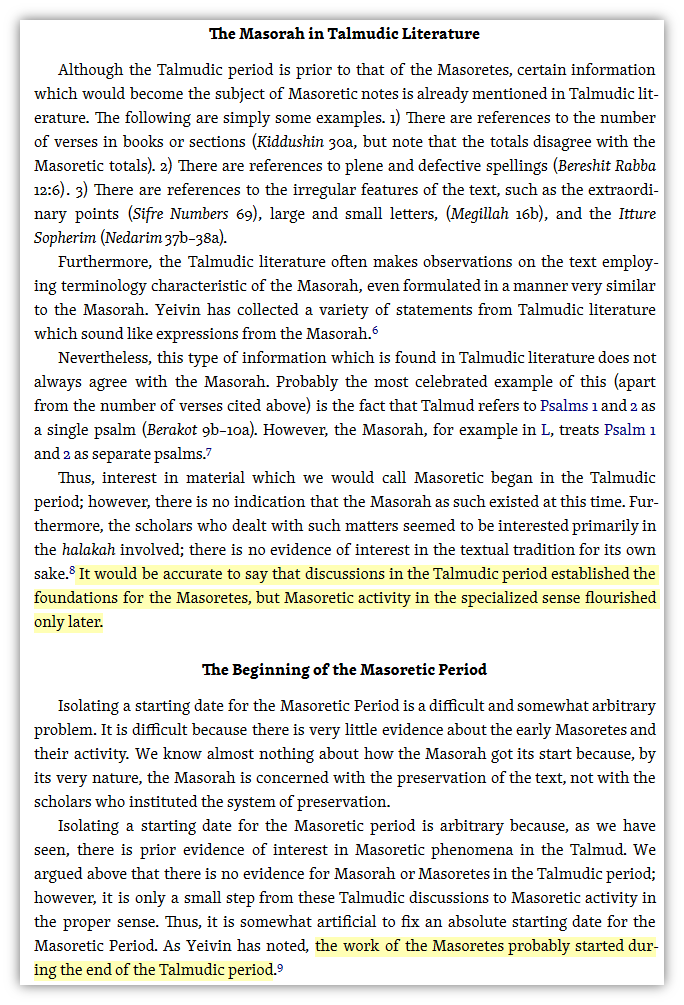 In summary, the Masoretes operated in the "milieu" of the legacy of Jewish tradition, which was codified in the Talmud.

The Babylonian Talmud relates the following regarding the interpretation of the verse at hand. This following citation comes from Folio 55B of b. Sabbat 5:4, XII:15-16 as translated by Neusner (2011). 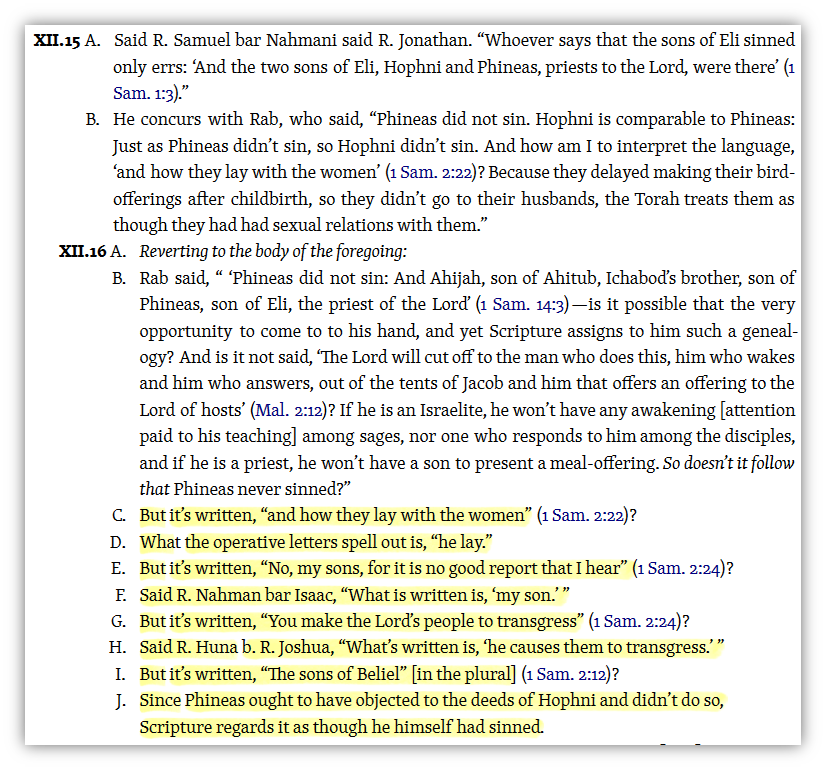 However, these rabbis seem to be drawing from proto-Masoretic texts relating to the same source material used for translating the LXX. That is, the subject of the last clause of 1 Sam 2:24 is not third person plural, but third person singular in the LXX. In other words, the rabbis speaking in Para F and Para G (above) are alluding to someone in the singular (Hophni) not serving God, and not plural (Hophni and Phineas). Tan and deSilva (2009) relate why -

The Hebrew reads "the people of the LORD spreading" as the object of "hearing," instead of the result clause in the LXX of "so that the people do not serve God." The difference comes from reading a daleth in a participial form of עבד ("to serve") rather than a resh in participial form of עבר ("to cause to transmit" in this case).

As already noted earlier, written punctuation did not appear in the Hebrew Scriptures until the Masoretic Period.

While modern readers of English translations of the LXX would understand "people" in the context of this verse in an aggregate sense -- such as the people of Israel in general -- the Talmudic rabbis used this ambiguity to advance their nuanced interpretation. That is, Hophni was the philanderer who was taking advantage of the female attendants of the Tabernacle, whereas Phineas, his brother, by not intervening, had provided tacit consent to his wrongdoing. Thus Samuel, who authored the book bearing his name (please see Babylonian Talmud Folio 14B and Folio 15A of b. Baba Batra 1:XI-XV), had included them both culpable in the literal sense of the text (as the Talmudic rabbis as noted had correctly observed). The paragogic nun, therefore, provides the reader the necessary indicator that the verbs carry nuanced meaning, for which the reader today must turn to the Talmud for the Jewish oral tradition behind this verse.

The hypothesis described in this posting is one tentative approach for understanding why two paragogic nuns appear in the verse at hand. In this verse, the paragogic nuns provide the necessary but nuanced grammatical appendage that signals to the reader that there is extrabiblical (oral proto-Masoretic tradition) bearing on the verse and its interpretation. Thus the appearance of the paragogic nun may be related to more than just the semantic and grammatical structure of the verse and its words (in cases where the nun complements and closes the vowel stress when preceding an aspirant consonant, and so forth).

In summary, this hypothesis provides one tentative view based on Jewish oral tradition. Further study will have to occur (such as unpacking the textual and manuscript variants for this verse as noted in the critical apparatus of the Biblia Stuttgartensia Hebraica).

Not the answer you're looking for? Browse other questions tagged hebrew or ask your own question.

0
Why does the Hebrew word "chesed" in Psalm 136 have two meanings?
4
What is the role of the paragogic heh when used with the second person as in Psalm 108:5 (ר֣וּמָה)?
9
Why does Strong's have two different entries for the word "Adam"?
9
Genesis 19:24, Two Yahwehs?
2
What is the best manner to translate the 1 Sam 5:4’s expression (רק דגון נשׁאר עליו) between 'the trunk of Dagon' or 'the fish part of Dagon'?
7
"Be holy as I am holy"; why are the two words for "holy" written differently in Hebrew?
2
Why are two different words used for 'vision in Daniel 8:15 and 16?
4
Did God make two great lights or did He make the great light two?
5
What does הֵיכַ֥ל mean in 1 Sam. 1:9?