Was υἱοῦ θεοῦ a latter addition to Mark 1:1?

Dick Harfield mentions that the phrase "Son of God" (υἱοῦ θεοῦ) does not appear in Codex Sinaiticus (nor in Origen). Is it reasonable to assume on this basis that the phrases was a later addition to the text? And if so, why do a number of critical scholars treat the text otherwise? (e.g. Rhoads et al write in Mark as Story that "the narrator introduces Jesus in the first line as 'the anointed one, the son of God.'") What are the arguments for retaining the phrase?

The autographs being lost, it is impossible to say for sure whether or not the original of Mark 1:1 included "Son of God" or not. Nevertheless, I will attempt to provide pros and cons in each direction, and leave it to the reader to come to his own conclusion.

First, however, let's take a look at the actual manuscripts.

Exhibit 1: Codex Vaticanus. Note that this manuscript includes, ΙΥ ΧΥ ΥΙΟΥ ΘΥ (of Jesus Christ, Son of God). The little bar over ΙΥ is called a "nomina sacra," indicating that the word is in an abbreviated form. Take note also of the stylized intro to Mark in Codex Vaticanus (I mean the large "A" and all that.) In Vaticanus, Mark actually starts on the same page as the ending of Matthew. 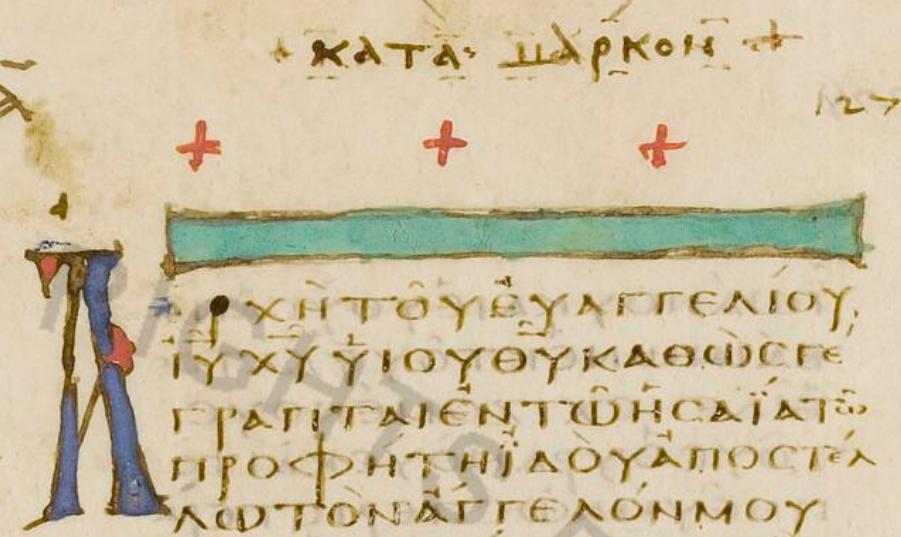 Exhibit 2: Codex Sinaiticus. This manuscript includes ΙΥ ΧΥ but not Son of God. Unlike Vaticanus, Mark starts on its own page. 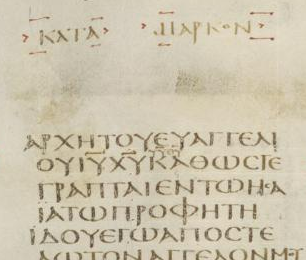 Exhibit 3. Codex Alexandrinus. This manuscript includes ΙΥ ΧΥ ΥΥ ΤΟΥ ΘΥ, hence includes Son of God. Notice the extra word "του." Vaticanus doesn't have this word. Nevertheless, the meaning is identical. Also notice that ΥΙΟΥ (Son) is in the abbreviated form ΥΥ. Like in Codex Sinaiticus, Mark starts on its own page.

Note some important points regarding this manuscripts.

Now, it seems to me that if Son of God were missing from the original autograph of Mark, adding Son of God to a manuscript must have been a deliberate addition by the scribe. It is inconceivable to me that he could have added this by accident, especially since it fits "so well" into the verse.

If, however, the original autograph of Mark included Son of God, it is conceivable that a scribe could have skipped over it by accident. The scribe may have been copying a manuscript in which Mark begins like this: ΑΡΧΗΤΟΥεΥΑΓΓΕΛΙΟΥΙΥΧΥΥΥΘΥΚΑΘωCΓεΓΡΑΠΤΑΙεΝ...... If a scribe (who may have been exhausted after copying Matthew) were to accidentally skip over ΥΥΘΥ (which looks similar enough to KAΘω, having a Θ as the third letter) I wouldn't be too surprised.

Alternatively, I suppose that a scribe could have omitted ΥΥΘΥ on purpose, but why would he do this? Deliberate scribal changes are often done to make the text look "better," not worse.

Codex Sinaiticus is the earliest manuscript with a complete copy of Mark's Gospel, although even it only dates from the fourth century. Sinaiticus and some other important manuscripts do not include "Son of God."

Christian authors up to the fourth century, including Origen, Epiphanius, and Victorinus quote Mark 1:1 without “son of God.” Epiphanius also omitted the words "Jesus Christ."

Mark has no virgin birth story and compared to the other Gospels presents Jesus as more human than divine, potentially leading the reader to believe that when Mark uses “son of God” later, it is used as a title of a position that had been achieved in life. It became an important statement to Christian theology to place “son of God” at the beginning of Mark, indicating that Jesus was son of God from the beginning.

I have noted that, in Mark's Gospel, only outsiders ever refer to Jesus as "Son of God," an observation that would be out of place with this as an assertion in verse 1:1. So, demons, high priests and the centurion at the crucifixion can refer to Jesus as the Son of God, but neither Jesus nor any of his disciples ever uses this term - Jesus frequently refers to himself as "Son of man." God can refer to Jesus as his beloved son (1:11, 12:6), but God is above criticism. I have suggested the gospel's author was being cautious to protect the early Christian community from Jewish claims of blasphemy. The other New Testament gospels, being later, were increasingly willing to ignore Jewish sensitivities.

Codex Vaticanus, another fourth century manuscript, includes "Son of God," as do the majority of later manuscripts.

As shown above, a case could be made for inclusion or omission of "Son of God." However I believe the case for omission is stronger.

Further support for the view that the bracketed in 'the beginning of the gospel of Jesus Christ (the son of God)' is a later addition: It has been suggested that the bracketed words are original and were omitted when a scribe skipped the bracketed in Christ(ou huiou tou the)ou, but it is not very probable that a scribe's attention would wander when he was still fresh, right at the beginning of a work he was copying, whereas it is easy to see why someone would want to add something so well known and significant, which occurs, for example, in 8 other passages of Mark.