In James 2:7, what is the meaning of the phrase «τὸ ἐπικληθὲν ἐφ᾽ ὑμᾶς»?

The Greek text of Jam. 2:7 according to the Textus Receptus states,

which the King James Version translates into English as,

7 Do not they blaspheme that worthy name by the which ye are called? KJV, 1769

I would have supposed the English phrase “by the which ye are called” (i.e., “by which you are called”) in the King James Version to have been translated from the Greek phrase «τὸ καλὸν ὄνομα ὅ ἐπεκλήθητε», literally, “the good name that you are called (surnamed).”

6 But you mistreated the poor man. Is it not the rich who oppress you, and they who drag you into court? 7 Is it not they who blaspheme that good name ‒ the one after whom you were called? 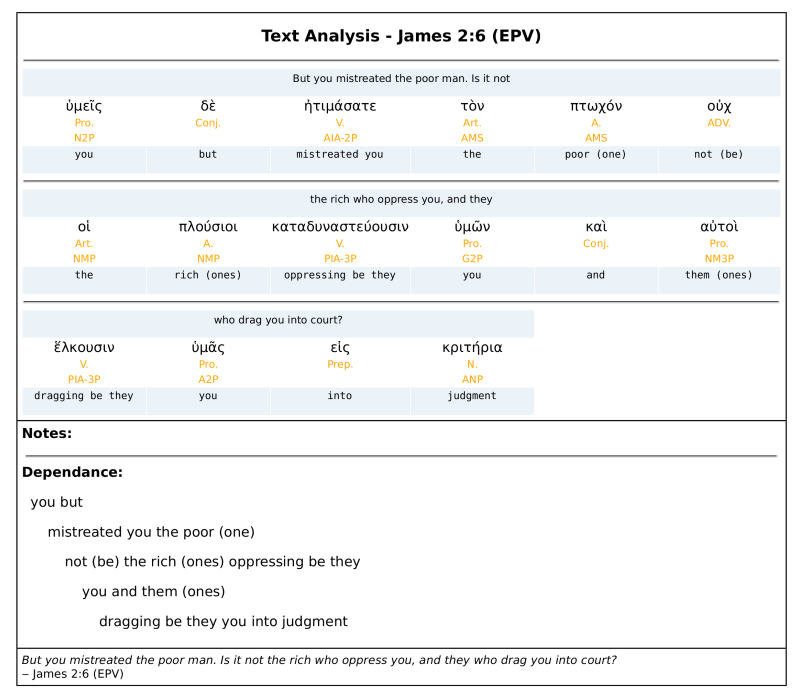 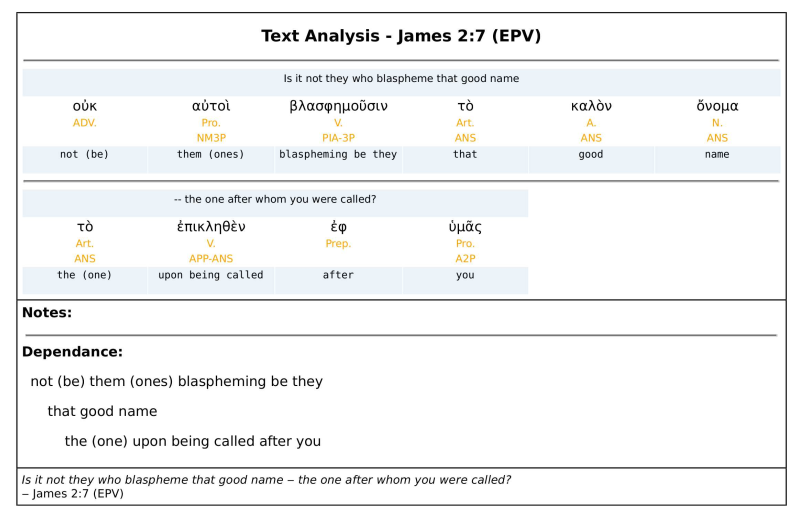 ἐπικληθὲν could just as well been given as "upon being named", but I felt "Is it not they who blaspheme that good name ‒ the one after whom you were named?" didn't read as well as how I've given it.

As is so often the case, this is an allusion to the LXX:

Brenton Isa 43:7  even all who are called by my name: for I have prepared him for my glory, and I have formed him, and have made him:

Notice the context of the sonship of the Jews:

Isa 43:6  I will say to the north, Bring; and to the south, Keep not back; bring my sons from the land afar off, and my daughters from the ends of the earth;  Isa 43:7  even all who are called by my name: for I have prepared him for my glory, and I have formed him, and have made him:

I concur with Clarke:

...To be called by the name of anyone, is synonymous with being regarded as his son, since a son bears the name of his father (see Isa_44:5; Isa_48:1). The expression, therefore, means here, all who were regarded as the children of God; and the promise is, that all such should be re-gathered to their own land...

Paul, like James understands the believers to be part of God's family which spans heaven and earth:

Eph 3:14  For this cause I bow my knees unto [God,] the Father of our Lord Jesus Christ,  Eph 3:15  Of whom the whole family in heaven and earth is named,

Barnes has some helpful notes on this passage, again tying the name-bearing to being family:

Is named - This means substantially the same as is. They are all of one family. They all have one father, and are all of one community. The expression is taken from the custom in a family, where all bear the name of the “head” of the family; and the meaning is, that all in heaven and on earth are united under one head, and constitute one community. It does not mean that all are “called” by the same name, or that the name “Christian” is given to the angels, but that they all pertain to the same community, and constitute the same great and glorious brotherhood. Part are in heaven, near his throne; part in distant worlds; part are angels of light; part redeemed and happy spirits; part are in the church on earth; but they are all united as one family, and have one head and Father. This glorious family will yet be gathered together in heaven, and will encompass the throne of their common Father rejoicing.

This appears to be a reference to the baptismal formula ("the Name of the Father, and of the Son, and of the Holy Ghost").

I would translate the Greek as follows:

Do they not blaspheme the good name which is invoked over you?

Matthew 28:19 (DRB) Going therefore, teach ye all nations; baptizing them in the name of the Father, and of the Son, and of the Holy Ghost.

Alternatively, the word ἐπικληθὲν could be taken to mean 'known by' (as in a surname or other appellation). In which case it could refer to the name 'Christian,' which is indeed a "good" name, and a badge of honor.

4
In 1 Timothy 1:4, why does the King James Version have “edifying” rather than “dispensation”?
6
Why is the participle ὢν in John 9:25 translated into English as past tense?
7
In Hebrews 11:17, why does the author use «προσενήνοχεν», first, and then shortly thereafter, «προσέφερεν»?
8
What does the word "for" mean in the phrase "Christ died for our sins"?
8
In Luke 22:31-32, what is the significance of ὑμᾶς?
0
In Philippians 2:25, what is the most accurate translation of «ἀπόστολον»?
5
In 1 John 2:27, what is the meaning of the phrase "τὸ χρίσμα"?
5
In Ephesians 6:6–7, does «ἐκ ψυχῆς» modify «ποιοῦντες τὸ θέλημα τοῦ θεοῦ» or «μετ᾽ εὐνοίας δουλεύοντες τῷ κυρίῳ»?
2
In Ephesians 2:19, what is the proper translation of «οἰκεῖοι τοῦ θεοῦ»?
3
Why did Textus Receptus add "prōtotokos" in Matthew 1:25, or why did the greek NU-Text omit "firstborn" before son?