Are bdellium and onyx stone types of 'gold'?

The Hebrew noun זהב means 'Gold', but in the context of Genesis 2:12 it would read more naturally as a generic term for anything precious that is found naturally:

The phrase 'bdellium and onyx stone are there' seems to expand on the reference to gold rather than be an addition. In other words it seems to mean something like:

My question is whether that is possible—can the Hebrew word here be interpreted as a generic term or must it be understood to refer specifically to the yellow precious metal?

When viewed through the lens of Jewish tradition, the suggested literal translation of the verse would appear as follows:

Gen 2:12
And gold of the land is good: there [one finds] the yellow and the red stone.

The word of "bdellium" in this verse is בְּדֹלַח, and occurs only twice in the Hebrew Bible (here and in Numbers 11:7). In the latter instance, the reference is to Manna, which appears in that context to be white/yellow in color. 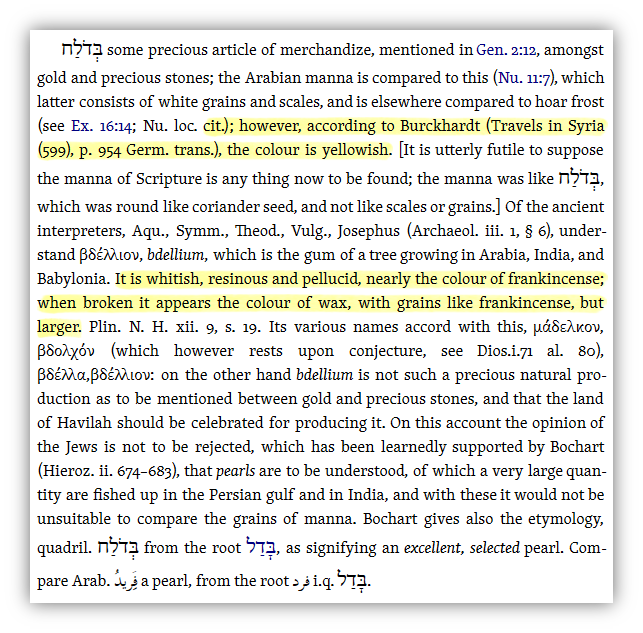 The word for "onyx" in this verse is שֹׁהַם. The color of this stone can be of variant colors to include red (that is, the carnelian stone).

According to the Hebrew Aramaic Lexicon - 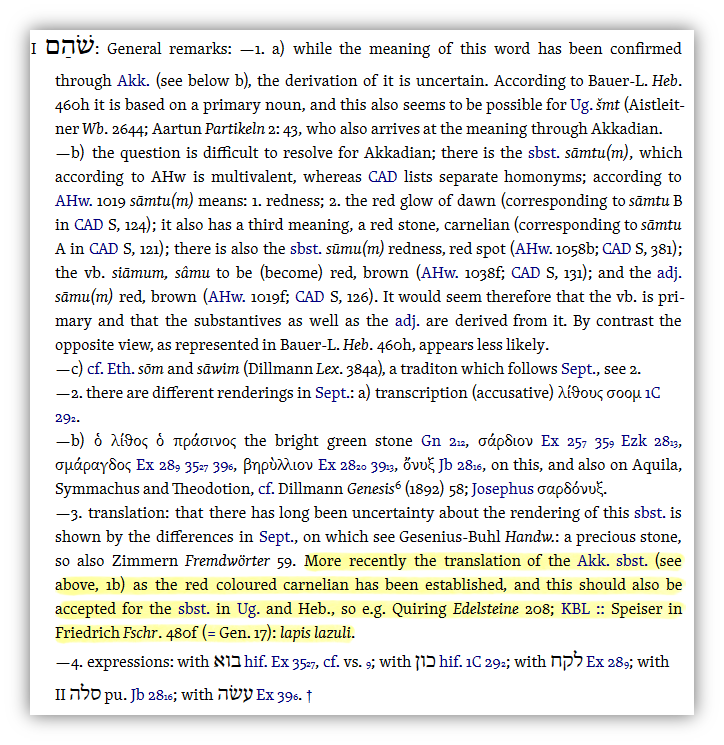 The Babylonian Talmud contains the received Jewish tradition as understood by the various rabbinic schools during the early and middle ages. The Talmud is a commentary of the Mishnah, which was the starting point for the received oral tradition. The Mishnah provides the two qualitative variants of gold -- pure gold (yellow) and gold alloyed with copper (red).

According to Jacob Neusner's translation of the Mishnah (m. Kippurim 4:4, K-M) - 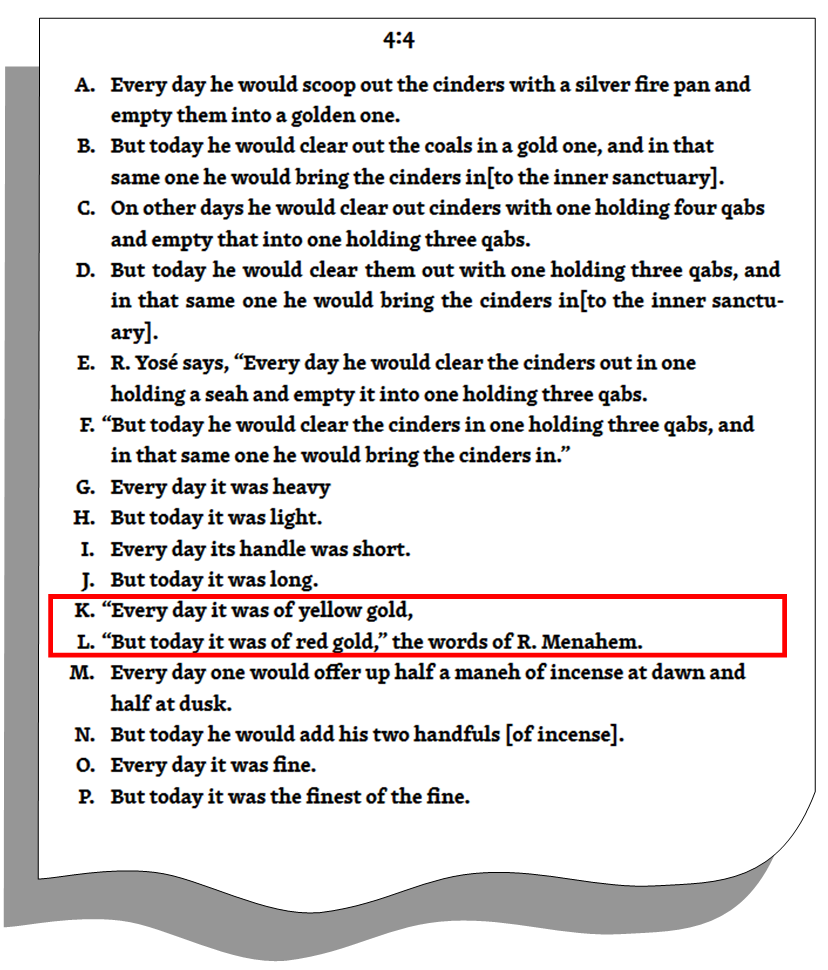 The rabbis in the early and middle ages took the Mishnah and wrote their analyses and commentaries. These writings were the "Gemara," which, when combined with the Mishnah, formed the Talmud in part as we know today.

The following is Gemara commentary and expansion of the Mishnah (see red box in the image, below) and as translated by Jacob Neusner - 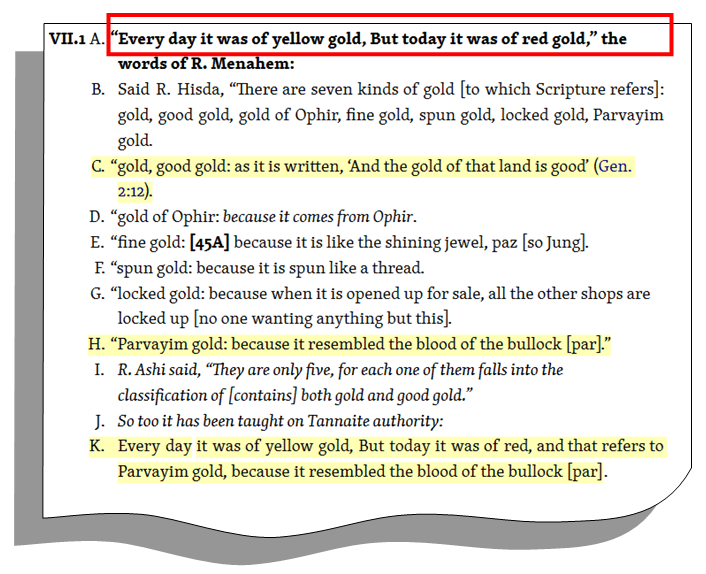 NOTE: The Baker Bible Encyclopedia defines the "Parvaim" as follows:

Parvaim.
Geographical area from which Solomon obtained gold for use in the temple (2 Chr 3:6). According to rabbinic sources the gold had a reddish hue, and was used to make the vessel with which the high priest removed the ashes from the altar of burnt offering on the Day of Atonement. Parvaim was probably located in Arabia. (Baker Encyclopedia of the Bible, V.2, p. 1617)

In other words, the Gemara makes reference to Gen 2:12 in order to indicate that there was "yellow gold" and "red gold." Since the "red gold" appeared from Parvaim, this gold was alloyed gold, which, when combined with copper for example, appears red in color. (The implied assumption here is that shovels in the Temple made of pure gold would be too malleable and too heavy to function as effective shovels.) The Talmud therefore seems to make the following distinctions of gold based on the allusion and reference to "yellow" and "red" found in Gen 2:12.

In the next section, the Masoretic Text appears to follow the Talmud. That is, the cantillation marks of the latter half of Gen 2:12 expand and modify the first half of Gen 2:12. Thus the references to yellow and red would modify "gold," which is alloyed (red) and unalloyed (yellow).

Masoretic Cantillation Markings in Relation to the Talmud

The Talmud existed during the early and middle ages (c.200-900 CE), whereas the Masoretic Era appeared later (c.900-1000 CE). Thus the Talmud influenced the Masoretic Text, and not vice-versa. Kelley, Mynatt, and Crawford (1988) indicate the following in this regard.

Thus when we view the cantillation marks in the Masoretic Text for Gen 2:12, the reader notices that the allusion and reference to "yellow and the red stone" are to gold. That is, the stronger disjunctive accents "point" to the logical reading of the Hebrew verse. Please click the image below to enlarge in order to see these contrasts. 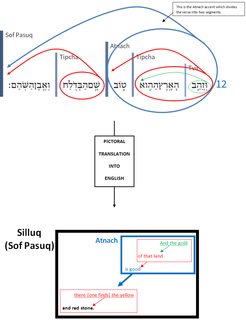 In summary, the Masoretic Text provides the literal backdrop to the Talmud, and therefore reinforces the received Jewish Oral Tradition.

The above discussion explanation appears to be how Jewish rabbis and scholars would have approached this verse throughout antiquity. That is, Jewish rabbis and scholars over the millennia passed on what they had received and/or understood as relating to passages of Scripture in the Hebrew Bible. Thus, while the primary interpretation of this verse signals apparent gems and other precious stones ("bdellium and onyx"), Jewish Oral Tradition provides the alternative explanation that refers to the types and varieties of gold ("yellow and red stone").

5
What are the four types of "wise men" in Daniel 2?
3
Would the Judeans in Babylonian exile have learnt to write “Cush” to mean Mesopotamia?
3
Three types of leaven found in the Pentateuch; what are the differences?
1
Where are rivers Gihon and Pishon located, how can we identify them today?
0
Types of animals in Genesis
8
What are the two lights in Genesis?
3
Are there Hebrew linguistic connections between the images of Creation and the Flood