Thou shalt not revile the gods, nor curse the ruler of thy people.

Is "gods" the correct translation of the Hebrew? The Hebrew word is אֱלֹהִים (’ĕ·lō·hîm), which is grammatically plural due to the ים- suffix. However, can it be translated as "God" instead, viz. "revile God"?

(This question is prompted by Robert Wright's reflections on Philo's use of this text.)

The relevant passage from Philo occurs as follows. Please click to enlarge. 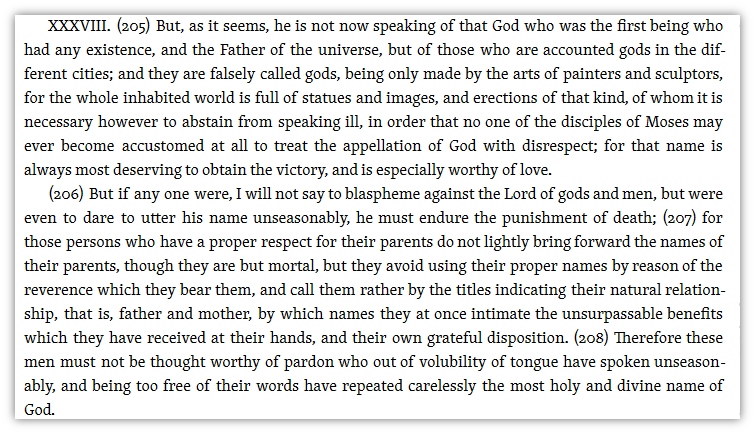 The suggestion is that authority on earth derives its authority from heaven. In this respect, Philo even indicates that parental authority stems from divine authority.

As noted by the reference of the OP, the translation from the LXX indicates "gods" from which Philo appears to have inferred the appellation to include foreign gods and deities in a wider context. The LXX translation however does not seem far from the logic of the Masoretic Text, because the verse juxtaposes the first part of the verse with the second part of the verse through four disjunctive accents. In other words, authority on earth is derived from authority in heaven.

There are four disjunctive accents in the verse. The first is the Tipcha, which continues until the more powerful Atnach appears, which is the second accent. This Atnach is what separates the verse into two logical halves. The Atnach contrasts whatever follows until the verse terminates, when the all-powerful Siluq appears. The third accent is another Tipcha, which, unless another more powerful disjunctive appears, will subsume whatever follows until the end of the verse, which completes the thought of the verse. The Sof Pasuq is the colon mark (:), which functions as the "period" for the Siluq. So the two Tipcha accents appear parallel. The logical suggestion from the cantillation is that authority on earth stems from authority from heaven.

So the "gods" mentioned in the LXX suggest higher authorities. If Philo were familiar with the LXX (and he was), then the term "gods" in Exod 22:28 in the LXX is not a reference not to pagan deities, but to angelic authorities, which are not to be reviled (cf. 2 Peter 2:10 and Jude 1:8) . Please click on the image below to enlarge, which is taken from Philo's commentary On the Creation VII (27). 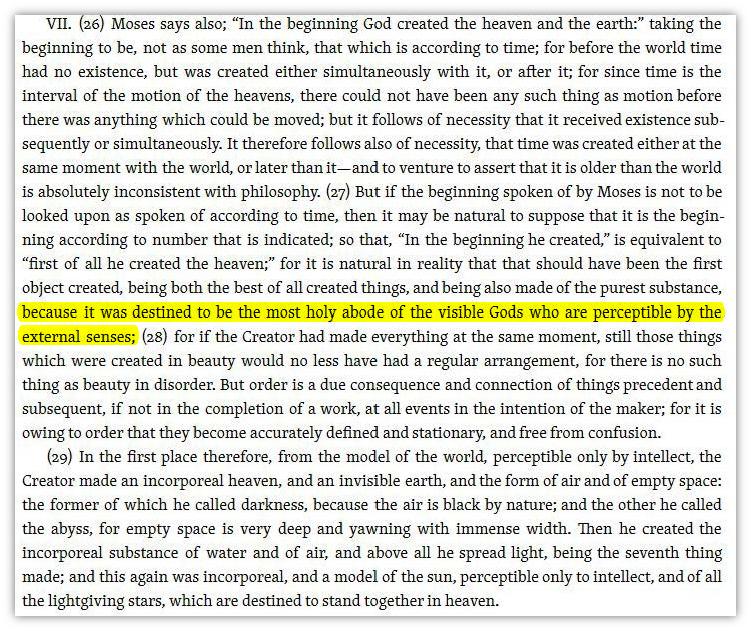 Philo's interpretation of the LXX version of Exod 22:28 was therefore not in reference to pagan deities, but to angelic power and authority. If this approach was his interpretation, then his application of this verse was not to revile any reference to the appellation of "God" (or "god"), since authority (whether God as the Creator; Gods as angels; or "gods" as deities worshipped by the pagans) stemmed from above, and therefore had merited all reverence from below.

I'm going to make this simple because a lot of folks want to over-complicate things. The translation you use -- "Thou shalt not revile the gods, nor curse the ruler of thy people," simply doesn't make any sense when Deuteronomy 12:2-3 teaches that one must destroy idols and things associated with idol worship -- which strikes me as a good way to revile the gods. As noted, the word אלוהים can, in context refer to human beings of great stature, such as judges. See, e.g. Ps. 82.

The context of Ex. 22:27 (Masoretic text) is that one should have respect for the local leaders. Since the second clause refers to respect given to "princes", the first verse must also mean deference is shown to another class of Jewish leadership. Here, Rashi tells us, the tradition is that it refers to judges. Of course, the Torah holds that not only should one show respect for judicial authority, it warns judges to earn the trust of the people. See Rashi commentary to Deut. 16:18-20.

It is a viable translation, but not the only possibility.

'Elohim', though plural in form, was often singular in meaning, referring simply to God (singular).

Alternatively, at times it was used with a plural meaning (when not referring to God), in cases where gods or judges (plural) were being referenced.

It is very similar to how we use the word "powers" in English, when we refer to "the powers that be", whether we mean God (singular), rulers (plural), something undefined, etc.

"gods" could then be eluding to - princes and principalities - whether good or bad, angels, or fallen angels and the devil. Since their powers come from God, they should not be reviled. And so it is instructed us not to slur or curse them, but to address God himself with our displeasure of those who do wrong, "Lord rebuke them." In saying this, we affirm to God, These are yours to command. And we know that God does still alllow and disallow these same to touch us or not to touch us. As in Job, God gave authority/permission to the devil to do some manner of things to Job, but not to kill him.

I think Bruce James makes an excellent point. If one were to tear down images, starues and altars of/to "gods", as commanded, doing so would be to revile them. One should look for an instance in. the Word where a forebearer or prophet or apostle or disciple reviled the "gods". Jesus doesn't answer the devil back with reviling, but calls on the Word to do His talking and answer him. And we are to say, The Lord rebuke you. Thus demonstrating that even he is under the authority of God alone, and is limited in power.