What is the best and most plausible English translation for this sentence in 1 Cor 15:2 from a linguistic and grammatical stand point (not theological)?

(a) 'being saved' as a process in progress?

"and by which you are being saved, if you hold fast to the word I preached to you—unless you believed in vain." ESV

"By this gospel you are saved, if you hold firmly to the word I preached to you. Otherwise, you have believed in vain." NIV

What we may be able to say with some degree of confidence is that since it is in the indicative mood, the "present" really does indicate that the present time is in view, which might argue in favor of the interpretation "being saved".

Since you don't want to jump straight to theology for your answer (which is understandable and commendable), your next step would be to examine contextual clues.

The verb σῴζεσθε appears in the present passive indicative (second person plural form). So the idea is present tense. That is, Wu and Tan (2010) structure the sentence as follows; here the word σῴζεσθε modifies the words "the gospel" found in the previous verse. Please click to enlarge. 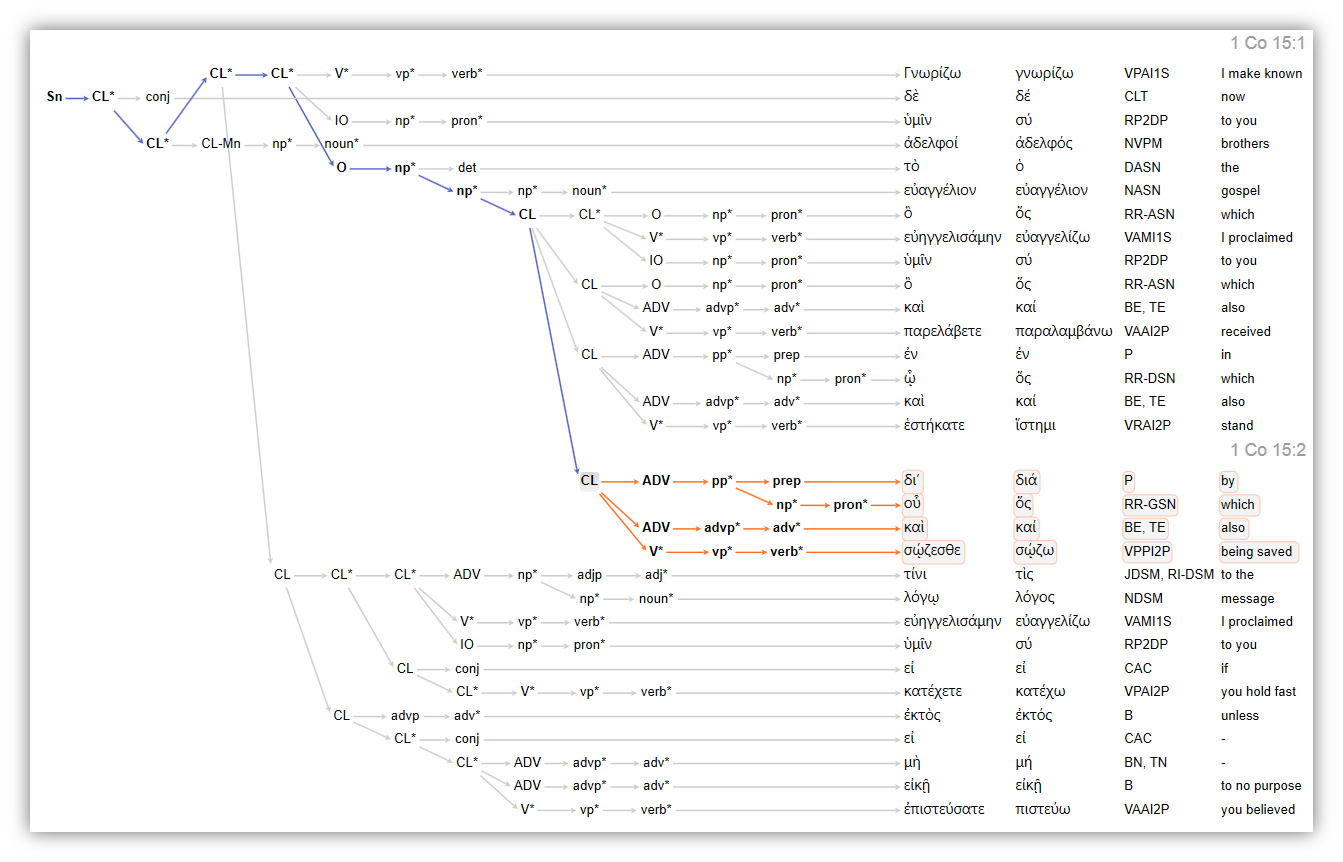 Thus the following translation would be accurate.

1 Cor 15:2 (Mounce Interlinear New Testament)
2 through which also you are being saved, if you hold firmly to the message I preached to you -- unless you have believed in vain.

Does this translation of σῴζεσθε therefore mean that salvation is a process, or a once-and-for-all state?

Hebrews 4:1-3 (NASB)
1 Therefore, let us fear if, while a promise remains of entering His rest, any one of you may seem to have come short of it. 2 For indeed we have had good news preached to us, just as they also; but the word they heard did not profit them, because it was not united by faith in those who heard. 3 For we who have believed enter that rest, just as He has said,
“As I swore in My wrath,
They shall not enter My rest,”
although His works were finished from the foundation of the world.

The Hebrew calendar therefore helps to understand the difference between "being saved" as a process, and "being saved" as a final state. In the wilderness wanderings, when the early rains occurred (in the autumn of the desert), the seed took no root for lack of faith: here "salvation" was in process, but was in vain. During the latter rains (in the spring time), Joshua entered the Promised Land, where the battle with the giants had just begun: here "salvation" was a final state.

In the same passage of the same epistle, Paul draws this same distinction.

1 Cor 10:1-5 (NASB)
1 For I do not want you to be unaware, brethren, that our fathers were all under the cloud and all passed through the sea; 2 and all were baptized into Moses in the cloud and in the sea; 3 and all ate the same spiritual food; 4 and all drank the same spiritual drink, for they were drinking from a spiritual rock which followed them; and the rock was Christ. 5 Nevertheless, with most of them God was not well-pleased; for they were laid low in the wilderness.

Paul says that the Jews in the wilderness had the "sacrament" of baptism (were baptized in Moses), and had the "sacrament" of the bread and cup (spiritual food and spiritual drink), but were not "being saved" in the final sense, because their faith was in vain. In a few more chapters, the reader comes to Chapter 15, where Paul reiterates "being saved" in the final sense.

These verses are the gospel message, which must be combined with faith. Mere knowledge, or mental assent, is no different than receiving rain (early rains) in the desert from heaven--the outlook is preparatory. However, when combined with faith, that same rain from heaven (latter rains) results not only in the Passover (Feast of Unleavened Bread) but also in the Feast of First fruits (Pentecost), which occurred 50 days after entering the Promised Land. In the Hebrew Bible, that 50th day marked the giving of the Law of Moses, but in the Christian New Testament, that same date was the giving of the Holy Spirit.

In conclusion, "being saved" is both a process ("early rains"), and a final state ("latter rains").

Not the answer you're looking for? Browse other questions tagged greek 1-corinthians soteriology or ask your own question.