Linking NT Greek to Hebrew through the LXX

My first answer would be a working knowledge of classical Hebrew and koine Greek. I suspect this is not what OP has in mind, but it is the "right" answer.

The major Bible software packages all offer some facility for getting at this information. But that doesn't exhaust the possibilities:

The best tool, bar none, is the CCAT/CATSS1 Parallel Aligned Hebrew and Greek Jewish Scriptures. This set of text files has been around for a long time, and forms the basis for some of the modules now found in BibleWorks or Accordance.

It is, at one level, very basic. Here's what Genesis 1:1 looks like:

Obviously this is using a transliteration scheme which comes from a time when dinosaurs walked the earth ... or before the invention of "Unicode", anyway. It is in any case fairly simple to follow.

Here's an expanded version of that raw CATSS parallel text:

Each element of the Hebrew text is followed by tab, then the corresponding Septuagint text. There is a set of codes which indicate additions, omissions, transpositions, and "implied" elements (i.e., not explicitly present in the Hebrew, but required in the Greek).

This is the easiest -- and I would think also the best -- "tool" for seeing how any given Hebrew element was represented in the Greek Septuagint text, which is the same kind of Greek that the New Testament is written in.

The CATSS Parallel MT/LXX is superb for aligning specific translations, but of course not so good for seeing how any given Hebrew word was variously rendered in Greek by the Septagint translators nor, going the reverse direction, how many Hebrew words any particular Greek word represented.

Here, for almost a century, the go-to tool was E. Hatch & H.A. Redpath, A Concordance to the Septuagint: And the Other Greek Versions of the Old Testament (original publication, Oxford: Clarendon Press, 1897; reprinted variously). In this work, each Greek headword is followed by the listing of the Hebrew words it translates; lists of each occurrence of the Greek term in context is then keyed to the underlying Hebrew word. Here is the example for ἀρχή, "beginning" from Genesis 1:1 - 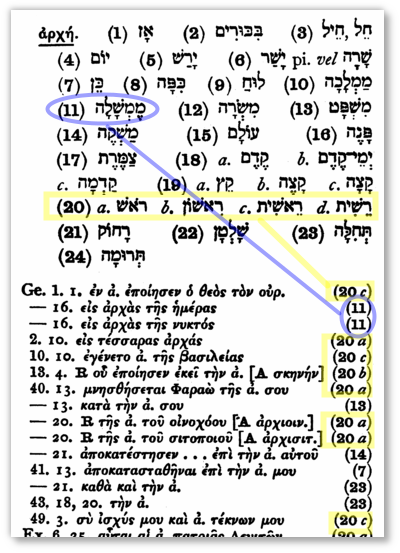 Here one can see how often in Genesis forms of ראש are used (the "20" sequence, highlighted in yellow), that it translates מֶמְשָׁלָה twice in 1:16 (#11, highlighted in blue) where the meaning is "ruler" rather than "beginning", etc.

Hatch & Redpath (as it's usually known) is unfortunately not available on Archive.org, nor (so far as I'm in aware, browsing in from the UK) is it available in Google Books. However, raw page scans of the entire work are (!) available on Wikimedia Commons. Our ἀρχή example is found across page 164 and page 164.

This is fine if you're starting with the Greek text. What if you want to start with the Hebrew, and find all its Greek translations? For that, one needs T. Muraoka's A Greek-Hebrew/Aramaic Two-way Index to the Septuagint (Peeters, 2010) (there were earlier editions).2

Some Greek New Testament lexicons will also provide the equivalent Hebrew words (of the Old Testament) in the lexical entry.

I would like to know which Hebrew words are translated into the Greek Septuagint by the Greek word ἀρχή.

Here is the entry for ἀρχή in A Greek-English Lexicon of the New Testament (New York: American Book, 1889) by Joseph Henry Thayer.

Notice how he begins his entry by indicating what Hebrew words are translated into the Greek Septugaint as ἀρχή.

Another alternative is using an electronic Bible study program, such as Logos. You can perform a word search for ἁρχή (and its declensions), and compare it to a parallel text of the Masoretic text, as well as an English translation (if you prefer). 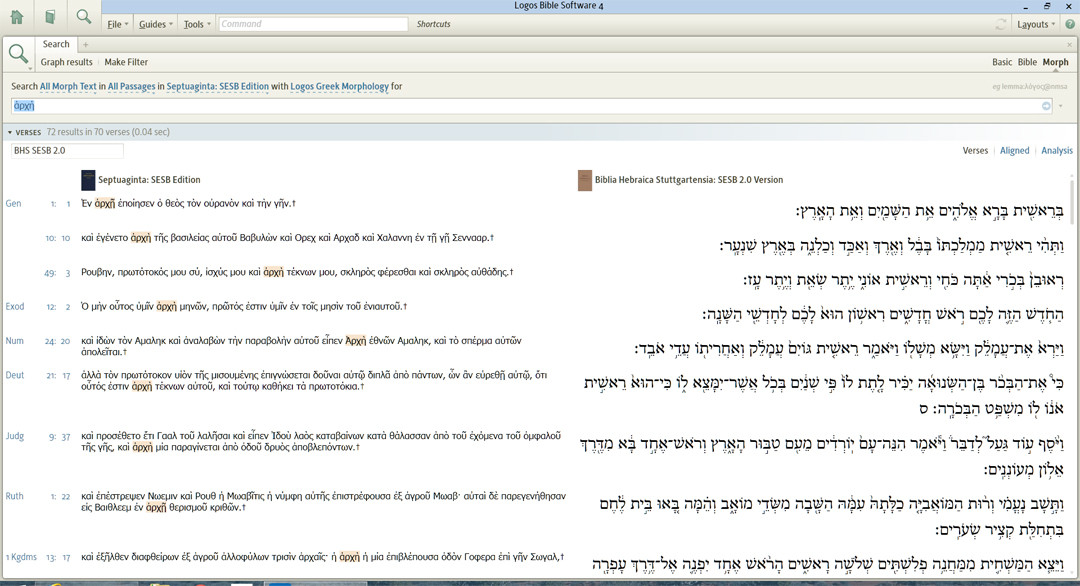 Not the answer you're looking for? Browse other questions tagged greek hebrew septuagint tools-of-biblical-studies or ask your own question.

5
Critical Edition of Septuagint in Hebrew

10
Is LXX "Enoch pleased God" a reasonable idiomatic translation of Hebrew "Enoch walked with God"?
5
Critical Edition of Septuagint in Hebrew
9
What's behind the difference between the Greek and Hebrew of Exodus 21?
2
In the LXX of 2 Samuel 5:18, what is the meaning of the word «τιτάνων»?
5
In Psalm 23:6 why is the word God /θεοῦ added in the LXX but lacking in the Hebrew Psalm 24:6 in it's equivalent אלהים?
5
Can a joint meaning of 'word of death' be derived for Isaiah 9:7 / 9:8 on account of the different words used in the Greek LXX and Hebrew Texts?
2
How were Paleo-Hebrew words in the Greek Septuagint fragments treated?