What is the difference between "eretz" and "adamah" in Gen 2:6?

These two words are variably translated as ground, earth, land etc. How should we understand the difference between the words in this passage?

Depending on its context, אֶרֶץ can be translated as ground, earth, land, piece of ground, territory, country, region, earth, or underworld.1 It's a very common word. This is not to say it can be translated as any of these in any context, the context (esp. specific phrases in which it's used) guides how it should be understood.

Below is a visual representation of the various 'senses' carried by אֶרֶץ‎:2 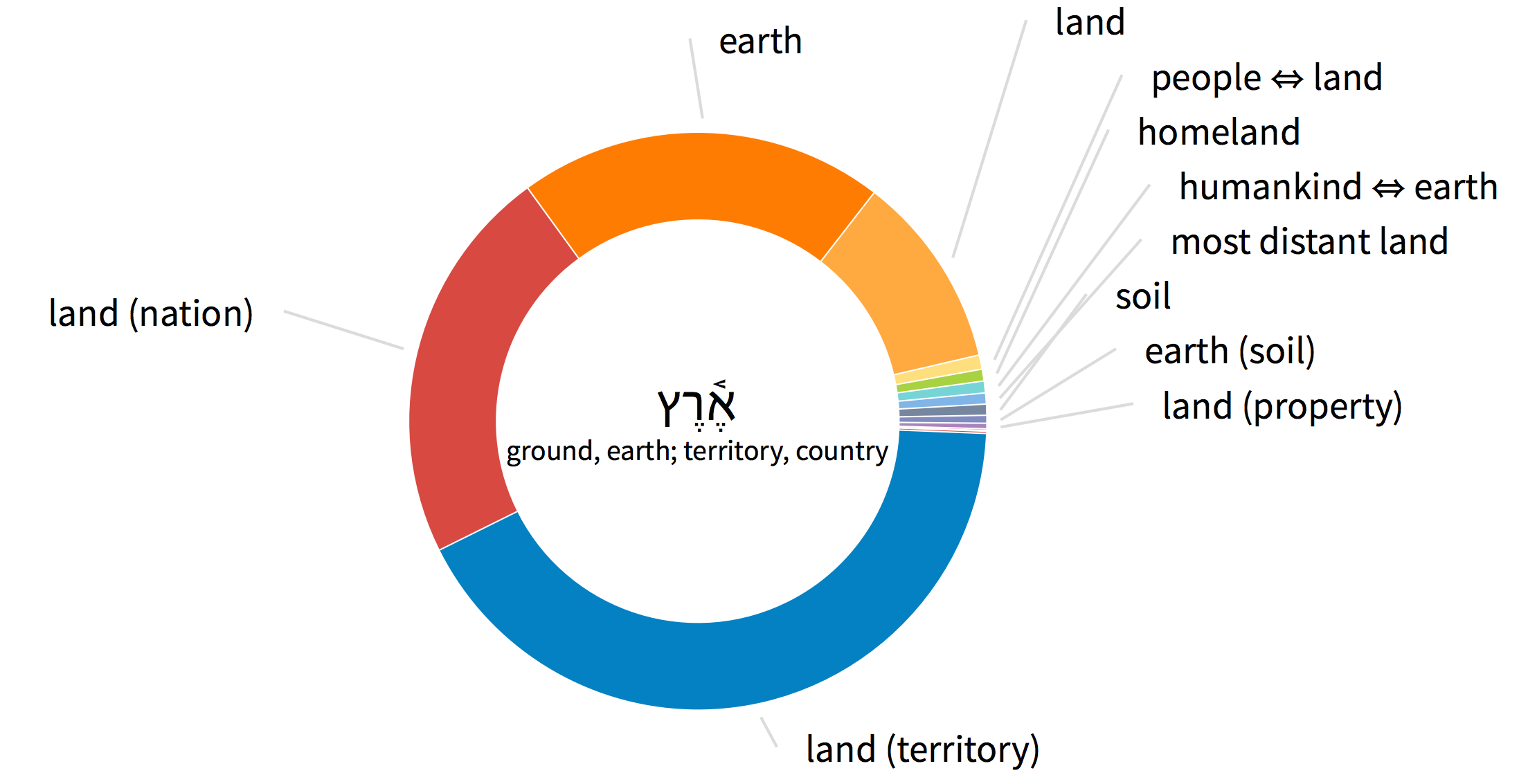 The sense chart shows the various senses along with their frequency of use in the Hebrew Bible. It is clear that the senses of 'land' (whether in the 'sense' of being a nation or territory) and 'earth' are the most frequent senses implied by this word throughout the Hebrew Bible.

אֲדָמָה is a near-synonym (plesionym) of אֶרֶץ. It can be translated as earth, arable ground, soil, territory, world, or underworld, depending on its context. Another sense visualization makes this clearer:2 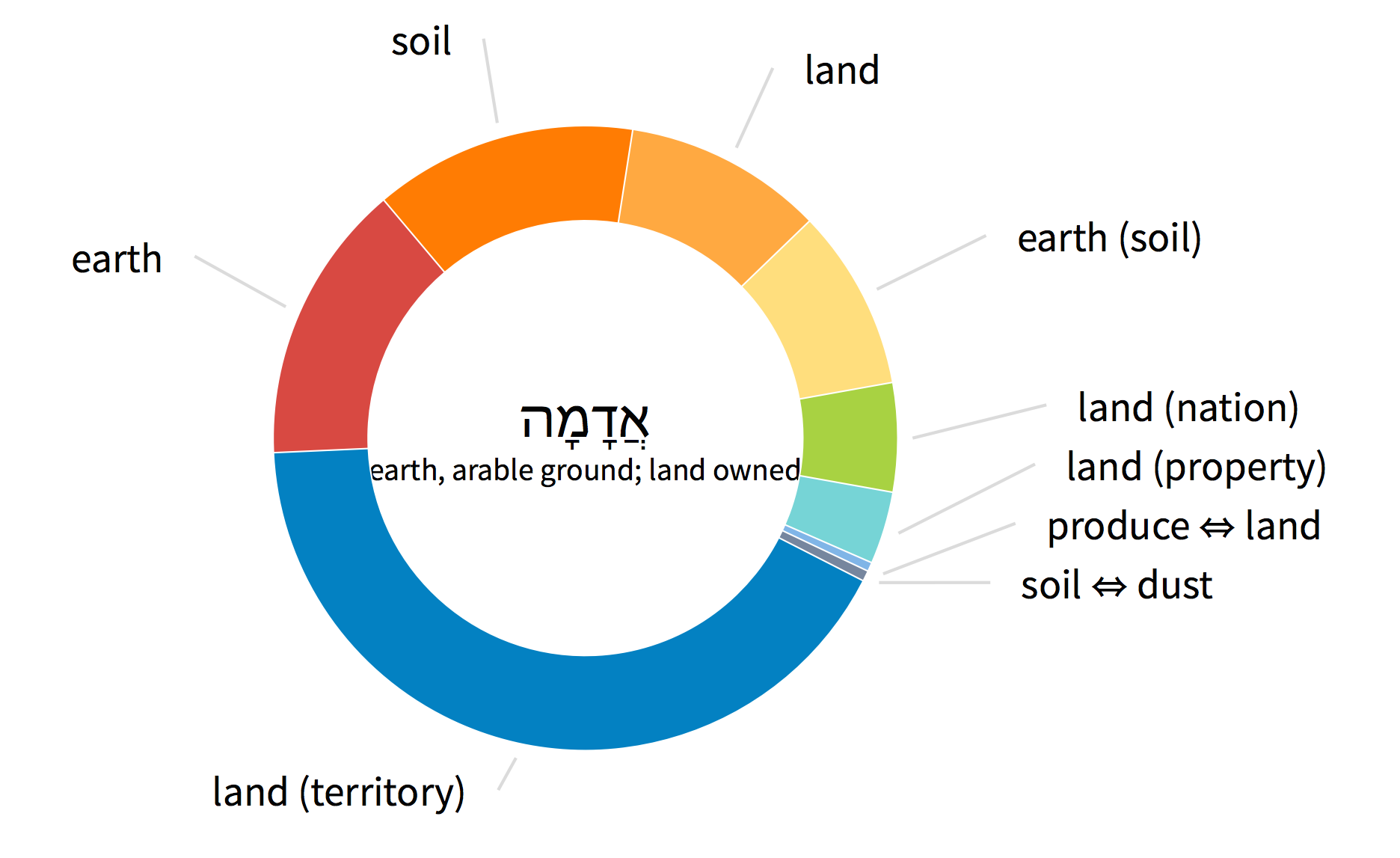 The evidence for synonymy comes from early translations as well. The Septuagint translated both terms as γῆς in this passage, which has a similar meaning in Greek.3

Given that these are synonyms yet different words, many translators use two separate words to prevent redundancy and to show this distinction. Even so, it could easily be translated,

Given that separate words were used by the original author of the text, it is likely that the slight difference in nuance expressed by most English translators is justified, for instance:

... but a stream would rise from the earth, and water the whole face of the ground... (NRSV).

But the best explanation is wordplay. In Genesis 2:7, the word for man/mankind is אָדָם (adam), and the connection between אָדָם and אֲדָמָה (adamah) is likely plain even for someone who doesn't read Hebrew. The sense is that 'man' (אָדָם) is formed by God from the soil/dust (אֲדָמָה), human life thus being described as a combination of a body formed from soil from the ground and breath given by Yahweh God (יְהוָ֨ה אֱלֹהִ֜ים), becoming a נֶפֶשׁ (nephesh), a living being.

So we see that in this creation account (beginning in 2:4), Yahweh God (יְהוָ֨ה אֱלֹהִ֜ים) made the earth (אֶרֶץ) and the heavens. However, a stream of some sort would rise from the earth (אֶרֶץ) and water the entire surface of the ground (אֲדָמָה, adamah). And then Yahweh God (יְהוָ֨ה אֱלֹהִ֜ים) formed 'man' (אָדָם, adam) from the soil/dust of the ground (אֲדָמָה, adamah).4 This wordplay seems most likely.

4 A creation account found in Nippur begins by observing that such a stream was not yet flowing. The Sumerian myth of Enki and Ninhursag also mentions such a watering system. Also, this idea of man being formed from the soil/dust of the earth is found elsewhere in Near Eastern mythology (e.g. the Atrahasis Epic explains the creation of man as a mixture of blood from a slain deity with clay).

The semantic range of אֲדָמָה ('adamah') revolves around the idea of "soil" (cf. BDB). It can mean the soil that you till, a piece of [tillable] property, earth as material substance, the visible surface of the earth, or even "country" or the entire "inhabited earth".

The significance of this for the interpretation of Genesis 2:6 may be that "a mist was going up from the land (eretz) and was watering the whole face of the soil (adamah)", indicating that the fertile soil (functional source of life) was being watered via this mist from the land.

Both אֶרֶץ and אֲדָמָה are to be understood as synonymous terms.

In this particular context, the exact parallel arrangement of disjunctive accents and cantillation marks suggests to the reader/listener that the second half of the verse is the amplification of the first half of the verse. That is, in this verse there are four disjunctive accents (highlighted in red), which are in exact musical and logical symmetry.

To view the idea in the visual sense, please click the hyperlinks in the following paragraphs.

In summary, this verse is a perfect example of parallelism, which the musical and logical symmetry of the accents and cantillation marks highlight. The listener/reader of this verse therefore was to understand that the second half of the verse was the symmetrical amplification of the first half of the verse. In this context therefore אֶרֶץ and אֲדָמָה were to be understood as synonymous terms.

The difference between the two words is that ha'aretz refers to the earth generally, B'rashith (Genesis) 1.1, 2; whereas ha'adamah specifies "the place" Adam was formed and the place of sacrifice - B'rashith (Genesis) 2.7, 8.21, or Bikkurim (First Fruit) Offering Devarim (Deuteronomy) 26.2.

The J.H. Hertz (Soncino) Commentary (B’rashith [Genesis] 2.7, page 7) says “the dust of the ground” was taken from the future place of the Holy Temple where the Altar of Atonement was located.

NOTE: “An altar of adamah thou shalt make unto Me, and shalt sacrifice thereon thy burnt-offerings, and thy peace-offerings, thy sheep, and thine oxen; in every place where I cause My name to be mentioned I will come unto thee and bless thee.” (Shmoth – [Exodus] 20.20)

Not the answer you're looking for? Browse other questions tagged hebrew genesis word-study or ask your own question.