Accurate translation of חֶמְדַּ֣ת in Haggai 2:7

I've been researching and I've come to see that this word is translated differently in different translations of the Bible. e.g.:

Some translations, as NKJV, make a special emphasis.1

What is the most accurate translation of this verse?

The Masoretic Text provides unambiguous guidance as to how to understand this passage. In this regard, the "Masorah" margin notes and end notes, in addition to the cantillation and accent marks of the verses in context, enable the reader to understand what the Masoretic editors had understood: that is, the riches are allusions to BOTH the material wealth of the Gentile nations AND to the Messiah, who, as the Angel of the Lord, will fill the future temple with His glory.

The verse in the Masoretic Text appears in the Biblia Hebraica Stuttgartensia as follows. The highlighting indicates words in the verse for which the Masoretic editors had provided marginal notes and references.

In the first instance, the Masoretic editors indicate to the reader that the word is to be understood in the genitive of construct. That is, in the margin they provide the Hebrew letter "ד" with a dot on top to indicate that the same word (in the genitive of construct) appears four times in the Masoretic Text of the Hebrew Bible. When we use the free download Interlinear Scripture Analyzer, which uses the same Codex Leningradensis as the Biblia Hebraica Stuttgartensia, we can identify these four passages in the Hebrew Bible. In other words, the Masoretic editors appear to have been aware of the LXX (Greek translation of the Hebrew Bible), which translated this word into Greek as plural, since the construct state and the plural form in Hebrew appear the exact same in the absence of vowel pointing. By making this marginal comment to the four occurrences of this word in the Hebrew Bible in the construct state, the Masoretic editors are indicating to the reader that their understanding was that the correct reading of this word was to be in the construct state (which carries the following word or phase as genitive). Thus the Amplified Bible provides an excellent translation of the first clause of this verse as follows:

Haggai 2:7 (AMP)
7 And I will shake all nations and the desire and the precious things of all nations shall come in...

The next word highlighted in yellow is וּמִלֵּאתִי, which is the Hebrew verb מָלָא in the Perfect Piel (with the "waw consecutive" thus lending the imperfect aspect in translation). The word has the small circle above in the Masoretic Text, which is the reference to the margin note. In the margin the reader will see the Hebrew letter "ד" with a dot on top to indicate that the same word appears four times in the Masoretic Text of the Hebrew Bible. (A quick check on the Interlinear Scripture Analyzer confirms the accuracy of the Masoretic Text -- please click here.) The editors of the Biblia Hebraica Stuttgartensia also annotate the superscript "4," which is the reference to the Masoretic footnotes and endnotes, which, in this case, appears in reference to entry 1867 of the Masorah Magna as annotated by Weil (2001). In three of the four instances, the Lord is the subject of the verb.

The Masoretic editors therefore draw to the attention of the reader that, in the three instances where the word occurs, and the Lord is the subject, the action of the verb occurs at some future judgment. The last reference (1 Ki 1:14) also carries some element of judgment: in that reference, Bathsheba and Nathan coordinate their approaches to the dying King David. Bathsheba assures Nathan that she will "fill" (or "confirm") the words of Nathan before King David in order to seal the fate of the conspirator Adonijah, who had schemed to replace David after his death.

Finally, and most interestingly, the Masoretic Text provides margin notes concerning the Hebrew phrase אָמַ֖ר יְהוָ֥ה צְבָאֽוֹת, which is "Lord of Hosts." The margin notes (with translation) appears as follows:

First, according to the Interlinear Scripture Analyzer, there are 14 instances where the Hebrew word מלאכי appears first in the singular (carrying the first person singular possessive suffix), or perhaps is the name of the prophet "Malachi"; and, secondly, appears in the plural form (with construct state ending). Either way, the Hebrew letters מלאכי provide this dual ambiguity. But why? The following table explains the subtle but VERY nuanced reference made by the Masoretes. 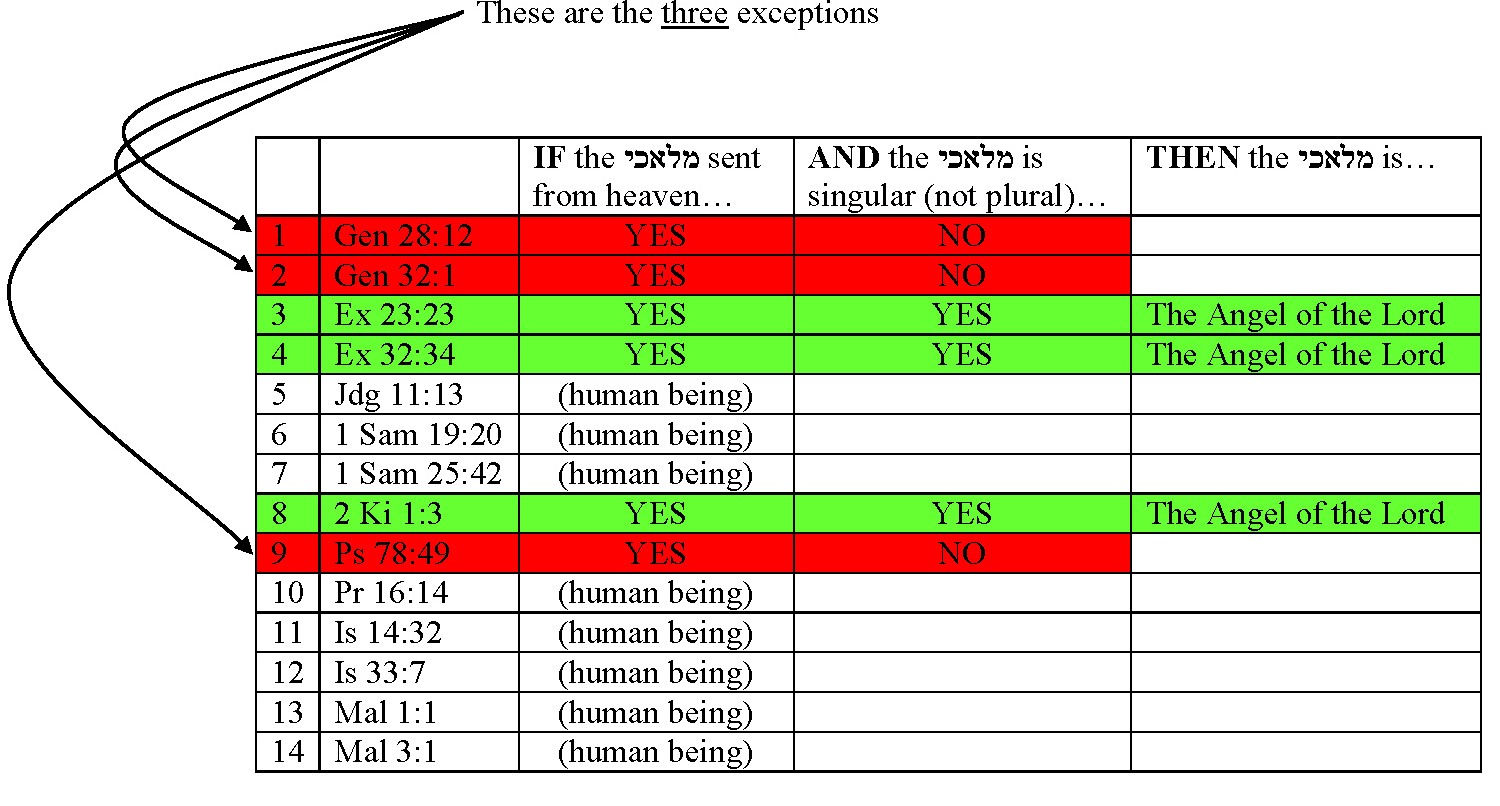 The Masoretic editors did not make direct reference to the Angel of the Lord, who appears several times in the Hebrew Bible in anthropomorphic form -- that is, the Masoretic editors used this subtle but very indirect approach for correlating "the Lord of Hosts" with "the Angel of the Lord." That is to say, there are many examples in the Masoretic Text were references are made to one or two other verses in Scripture; however, this approach is very indirect and of course very subtle. Without the Interlinear Scripture Analyzer to provide instant identification of Hebrew words and phrases in the Masoretic Text, this conclusion would not have been possible to surmise.

Secondly, and no less remarkable, according to the Interlinear Scripture Analyzer, there are 103 occurrences of the Hebrew phrase in vowel point order אָמַ֖ר יְהוָ֥ה צְבָאֽוֹת in the Masoretic Text, but the Masoretes are drawing the attention of the reader to only seven of those instances. In other words, and as we will see with the arrangement of the accents, the Masoretes selected only seven passages for one specific purpose: they associated the Lord of Hosts not only with the anthropomorphic Angel of the Lord, but they made this association with the Anointed Son of David. To this, we turn to the Masorah Magna. The editors of the Biblia Hebraica Stuttgartensia indicate that the relevant passages come from Entry 2379 from the Masorah Magna. Please click here. Using the reference of Weil (2001), we ascertain the relevant verses. To this end, we can ascertain the suggestions made by the Masoretic editors as to how to read and understand this verse. 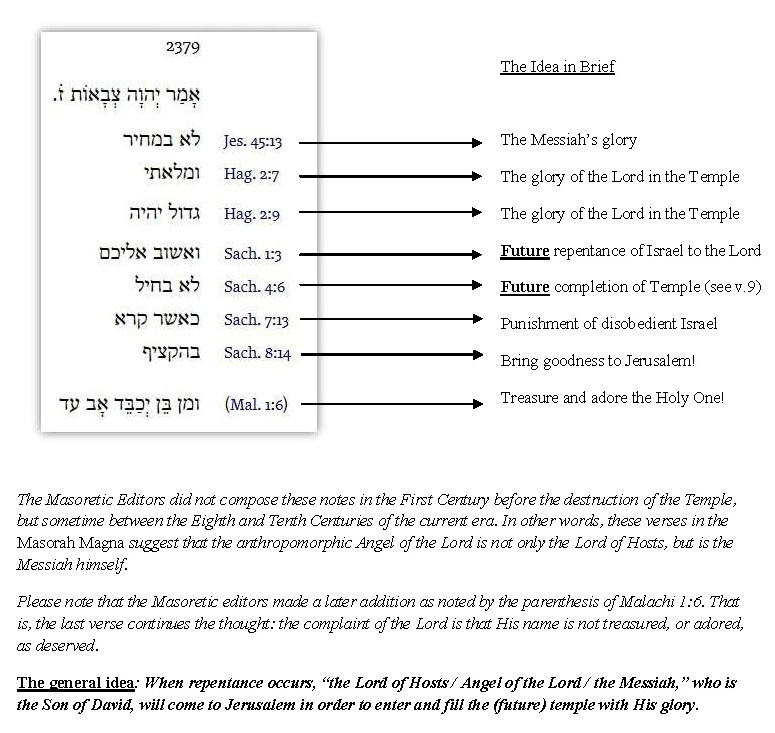 At this point, we now turn to the Masoretic accentuation and cantillation marks, which reinforce everything that has been written up to this point.

In Biblical Hebrew there is a hierarchy of accents. These accents provide not only guidance on how to "sing" the Scripture, but enable the listener to "hear" the relationship of words and clauses. The Nineteenth Century Hebraist William Wickes (1887) summed this idea well. Please click the image below to enlarge. 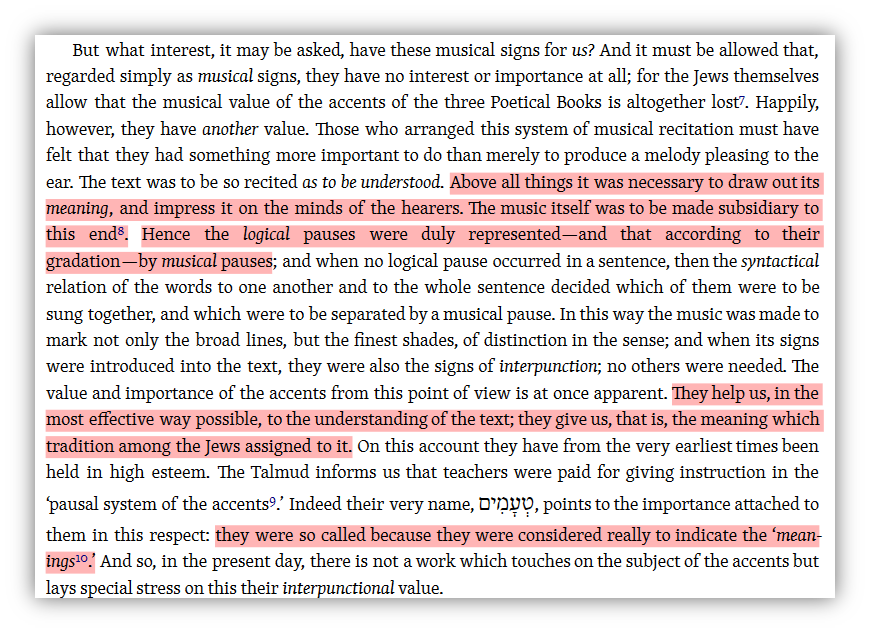 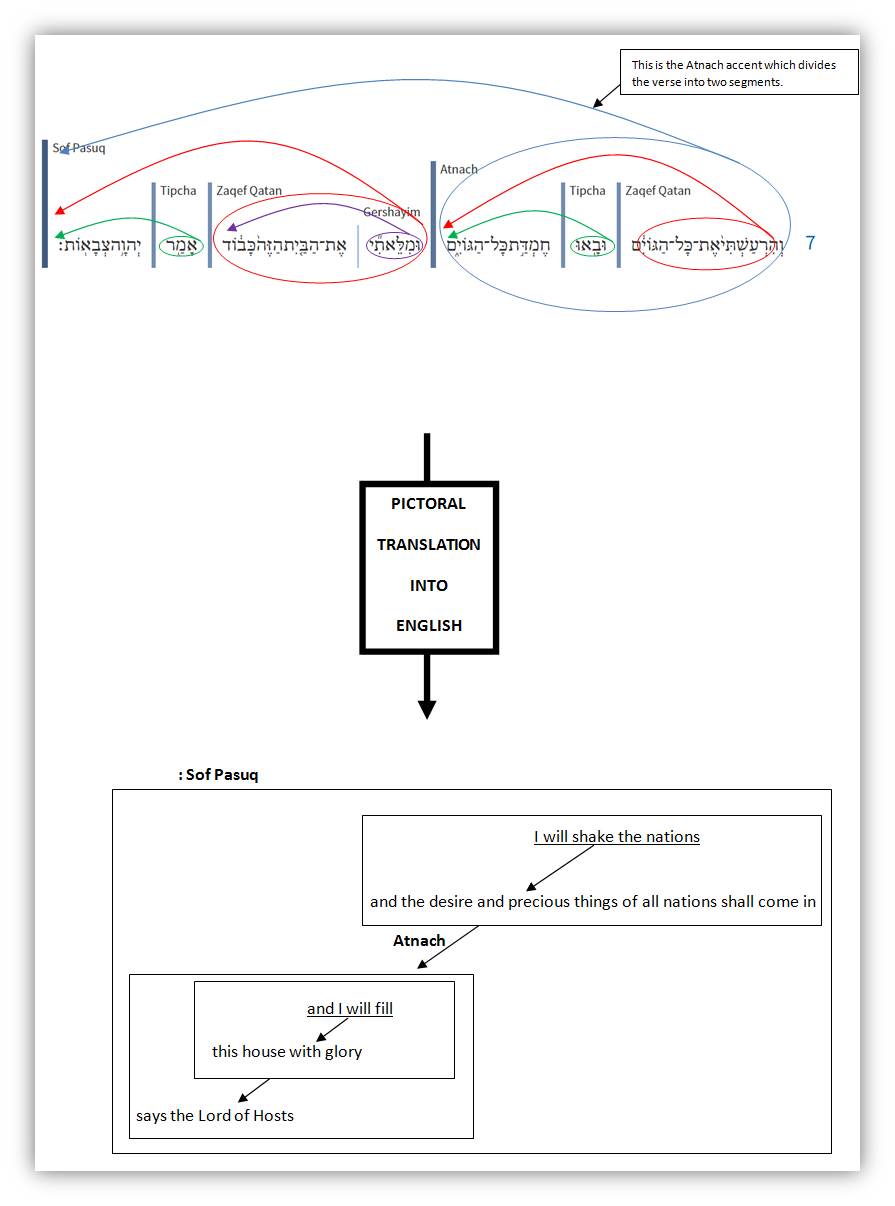 This diagram illustrates the point made by Wickes (1887): the cantillation marks enabled listeners to "hear" the music of Scripture and to "hear" how the same words and phrases related to one another. That is, the disjunctive accents not only provide the musical melody (which aided memorization), but also provided the hierarchy of thought between the words and phrases of the verse and paragraphs. In this example, the shaking of the nations will inaugurate Messiah and precipitate the Gentiles to bring riches (to Jerusalem). This presentation of the Messiah and the material wealth of Gentiles will therefore fill the House of the Lord (Temple in Jerusalem) with glory.

The Masoretic editors provided guidance through their margin and endnotes to Jewish rabbis, who in turn would guide the reading/singing and interpretation of the Biblical texts. The Masoretes conveyed their understanding of Scripture through the "Masorah" margin notes and end notes in addition to the cantillation and accent marks, which not only aided memorization (through the melodic sound of the public reading of Scripture), but, like music, provided the logical relationship of the "notes" (words) with almost mathematic precision. Thus rabbis were to interpret this passage from the Masoretic Text to indicate that the riches are allusions to BOTH the material wealth of the Gentile nations AND to the Messiah, who, as the Angel of the Lord, will fill the future temple with His glory.

Wickes, William (1887). Two Treatises on the Accentuation of the Old Testament (Vol. I). Oxford: Clarendon Press, 3-4.

Based on the Ugaritic root of חמד which means to "be pleasant" it seems to me that it would more accurate to translate this form as something which is pleasant, which could be stated as a treasure. However, the Hebrew form of this word's root is the verb "desire", so it is more natural to translate this form of the word to "desires." I'm much more inclined to read this with the Ugaritic root in mind though, as well as being more inclined to trust the ESV. I'm extremely familiar with and friends with a few of the scholars on the ESV translation committee and respect their knowledge of the language greatly. Ultimately, in my opinion, the difference is so slight that I don't believe it makes much of a difference, but again, in the earlier languages the verbal root is "to be Pleasant" or "to praise" so this form would be a thing which is pleasant or praiseworthy or desirable and thus translates well to "treasure."

Not the answer you're looking for? Browse other questions tagged hebrew haggai or ask your own question.

3
Haggai 1:6 - Thirsty vs Drunk
4
Accurate translation of הִתְעֵתֶים in Jeremiah 42:20
11
What factors define meaning of "little ones" in Deuteronomy?
8
Who or what is meant by the "ten men" of Zechariah 8:23?
9
What does צבאות actually mean, and why was it only ever transliterated into Greek and not translated?
0
Why do some translators include the phrase 'this shall be/seen' in Exodus 16:8?
5
Isaiah 14:6 - KJV/NKJV disagrees with other translations?
3
Haggai 2:21-23 fulfilled, failed or a future event?