In light of this scripture how does this fit in with a dispensational hermeneutic if this is the first resurrection?

Blessed and holy is he that hath part in the first resurrection: on such the second death hath no power, but they shall be priests of God and of Christ, and shall reign with him a thousand years.

Am I to understand literally that this "First Resurrection" is the fulfillment of the "Parousia(Rapture)" described in 1 Cor. 15:52,

"In a moment, in the twinkling of an eye, at the last trump: for the trumpet shall sound, and the dead shall be raised incorruptible, and we shall be changed.

Or is it something else?

“Consistently literal or plain interpretation is indicative of a dispensational approach to the interpretation of the Scriptures,” declared Charles Ryrie in 1965.

This statement by Charles Ryrie, prefaces an article by Thomas Ice, succinctly states the "Dispensational Hermeneutic". He(Thomas Ice) goes on in further explanation, quoting an article by Bernard Ramm,

This is sometimes called the principle of grammatical-historical interpretation since the meaning of each word is determined by grammatical and historical considerations. The principle might also be called normal interpretation since the literal meaning of words is the normal approach to their understanding in all languages. It might also be designated plain interpretation so that no one receives the mistaken notion that the literal principle rules out figures of speech. Symbols, figures of speech and types are all interpreted plainly in this method and they are in no way contrary to literal interpretation. After all, the very existence of any meaning for a figure of speech depends on the reality of the literal meaning of the terms involved. Figures often make the meaning plainer, but it is the literal, normal, or plain meaning that they convey to the reader.

"At the time of the translation of the church, all believers go to the Father’s house in Heaven (John 14:3), and do not immediately return to earth after meeting Christ in the air as post-tribulationalists teach."(source here)

The reason for the disparity between the 2 views is the "Great Tribulation", whereas John Walvoord, Dwight Pentecost, Charles Ryrie, Thomas Ice, and other Dispensationalists call the "catching away" of the church the "Blessed Hope".

"Then we the living remaining, together with them, will be caught away in (the) clouds for (the) meeting of the Lord in (the) air, and so always with (the) Lord we will be."(Interlinear translation)

"ἁρπαγησόμεθα"(harpazo, (catching away)) indicates the sudden, snatching away that comes from the Greek word ἁρπάζω a future passive indicative first person plural which is often used for a command, a Cohortative Indicative verb. This, in the view of John Walvoord and other Dispensationalists describes a separate, distinct action, and one that must be distinquished from the "Return of the Lord" which Dispensationalists and Futurists both agree as the Millenial Reign of Christ on earth.

In John 14:3, the bridegroom, Jesus, prepares a place for His bride, the Church, so that she “may be where He is.”(John Walvoord-ibid)

In this view, the church is "harpazo" away from what will befall the earth in the last days, and will enjoy the "Marriage Feast of the Lamb". Also, the church "consummates" her marriage with the groom, who will then return in His Second Advent, restoring Israel to her proper covenant relationship with Himself. This means the third Temple accounts of Ezekiel can be fulfilled and all the OT prophecies concerning the reign of the "Son of David" will be fulfilled before the Final Judgement. Israel in this view will reign over the earth, but the church, caught up in Heaven, having attained the 1st resurrection, will await in the Heavenly Jerusalem, where both John Walvoord and Dwight Pentecost state:

This allows for the interaction of the saints during the Millenial Reign, who have "resurrected bodies", as opposed to the unresurrected ones of those who 'survived' the Tribulation and are on the earth to meet the Lord in His 2nd Advent-the Millenial Reign. They will also face "Gog and Magog", the final battle which will determine their future destiny in the New Jerusalem.

In this view, ALL the saints on earth at the time will participate in the "Great Tribulation" and the Parousia/Millenial Reign will be 1 event. Therefore, unlike the Dispensational view the fulfillment of Rev. 20:6 and 1 Cor. 15:52 occur simultaneously. This is because, as Robert Gundry point out,

"Other things being equal, the word “descend” (καταβαίνω) indicates a complete, uninterrupted descent, like that of the Spirit of Christ’s baptism (Matt. 3:16; Mark 1:10; Luke 3:22; John 1:32, 33) and that of Christ in His first advent (John 3:13; 6:33, 38, 41, 42, 50, 51, 58.) Where a reversal from downward to upward motion comes into view, a specific statement to that effect appears, as in Acts 10:11, 16 (“a certain object coming down, … and immediately the object was taken up into the sky.”) In the absence of a statement indicating a halt or sudden reversal of direction, we naturally infer a complete descent to the earth, such as will take place only at the post-tribulational advent."(ibid)

In regards to the issue of "ἀπάντησιν τοῦ κυρίου εἰς ἀέρα" (meeting of the Lord in the air), in the view of the author of this paper, it is evident that

The word ἀπάντησις has exactly the same meaning here that it has in the other two New Testament references, particularly in Matthew 25:6. Nothing in the comparative study of the word suggests a withdrawal of believers to some other place, as the pre-tribulational view seems to require."(ibid)

To answer the OP's question, the Dispensational view requires a separate "Parousia" from the Millenial Reign, the interim being "The Great Tribulation". Rev. 20:6 is reconciled with 1 Cor. 15:52 by allowing for resurrected and unresurrected individuals being on earth at the same time; albeit those that are 'resurrected' escape the 2nd death(judgment), whereas the unresurrected must face the "Gog and Magog" battle which will determine their final destiny.

The Futurist viewpoint 'sees' no contradiction; those that "meet the Lord in the air(Parousia), are with Him during the Millenial Reign, and consequently part of the New Jerusalem-having already been "resurrected".

Quotes from Robert Gundry are taken from: Gundry, Robert Horton. The Church and the Tribulation. Grand Rapids, Mich: Zondervan, 1973

For the classic dispensationalist, the second category occurs at only one point of time, whereas the first category of resurrection occurs at two points (the rapture and then end of the seven year tribulation). 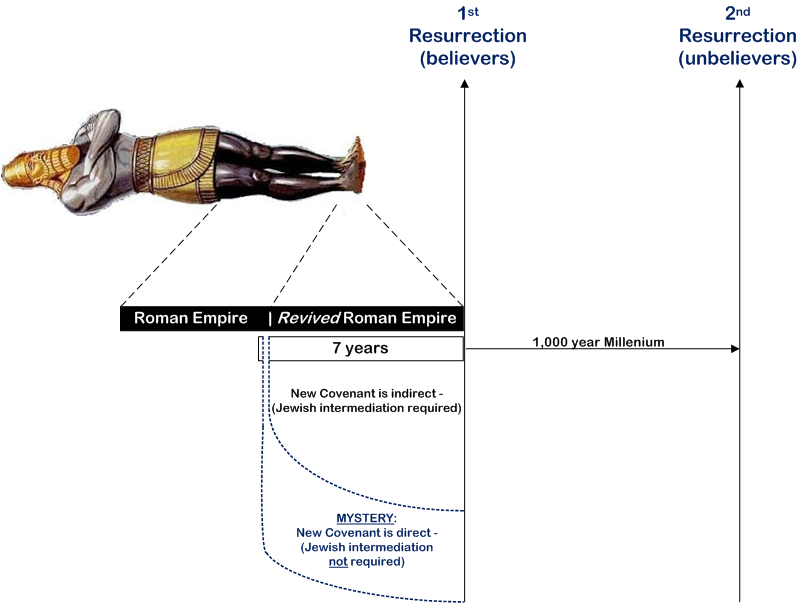 Both are mutually exclusive events: the emphasis therefore is not only chronological, but categorical as well.

5
How does John 5:28-29 fit with the dispensational hermeneutic
1
Does Christ return to Heaven after the thousand year reign, and then return to earth after the seventh trumpet?

13
What is the "first resurrection"?
4
How many future resurrections are there in the New Testament?
1
Does Christ return to Heaven after the thousand year reign, and then return to earth after the seventh trumpet?
2
The sea was no more. Is this referring to the new earth or is it the first seas that was no more?
0
Questions on the Trumpet and Vial Judgments of the book of Revelation
1
Does the 7th Trumpet really contain the 7 bowls of wrath? And what constitutes the third woe?
2
Can we interpret the "first resurrection"/"second death" (Rev. 20:6a) as made alive in Christ, spared from spiritual death (Col. 2:13, etc.)?
7
In Revelation 22:9, the angel claims to be 'of John's brethren the prophets.' How is this possible?