In Exodus 2:12, did Moses commit murder?

12 So he looked this way and that way, and when he saw no one, he killed the Egyptian and hid him in the sand. NKJV, 1982

The crime committed where a person of sound mind and discretion (that is, of sufficient age to form and execute a criminal design and not legally “insane”) kills any human creature in being (excluding quick but unborn children) and in the peace of the state or nation (including all persons except the military forces of the public enemy in time of war or battle) without any warrant, justification, or excuse in law. with malice aforethought, express or implied, that is, with a deliberate purpose or a design or determination distinctly formed in the mind before the commission of the act, provided that death results from the injury Inflicted within one year and a day after its infliction.

Under Jewish law he did not commit murder. The Egyptian was in Talmudic parlance a rodef -- a pursuer; i.e. one who was trying to kill another person or persons. In such instances, the pursued have the right to self-defense. Rava coined the , and third-parties have the right to kill the pursuer. Rava coined the famous Talmudic dictum (Babyl. Talmud, Sanhedrin 72a), "If someone comes to kill you, rise up and kill him first." This principle is not limited to acts of selfdefense, but obligates a third party to save a victim from his pursuant, even if this requires killing the pursuer (Sanhedrin 73a): "If one chases after his fellow to kill him, it is permitted to save the chased at the expense of the life of the pursuer." An important point is that if deadly force is not necessary to stop the pursuer, then the pursued or the third-party are obligated to use appropriate force. See Maimonedes (Mishna Torah, Rotze'ach 1:13). But as noted, if killing the rodef is essential to save another life, then the person who kills the rodef is exempt from punishment because the rodef would have been liable to the death penalty for the murder he intended, and his death is considered his punishment.

Where the verse says that Moses looked in both directions and saw "no man." Rashi says that you could rely on the plain meaning and say he looked to see if there were witnesses before he killed the Egyptian. While killing the Egyptian would be permitted under Jewish law, under the law of Egypt, the Egyptian was within his rights and Moses was not. However, Rashi also points to a midrash which explains that Moses uses his powers of prophecy to see whether the Egyptian would have any significant descendants who were meant to join the Jews, and saw that there were none.

Bruce JamesBruce James
4,05811 gold badge1616 silver badges3333 bronze badges
6
|  Show 1 more comment
0
Want to improve this post? Provide detailed answers to this question, including citations and an explanation of why your answer is correct. Answers without enough detail may be edited or deleted.

Let's think of modern day USA. Yes, I will say modern as this country is quite young. Do you think a slave master beating a slave is simply a brawl. The whole purpose of a slave owner was to use, exploit and terrorize the slave. Death of the slave actually may have been a grace considering the ongoing suffering and abuse. So, we cannot equate the "brawl" between the Hebrews in the same light as that between the Egyptian and Hebrew slave. In that scenario, the Egyptian, for years, had been exploiting the latter, deserving death? That is for God to clarify. I am "sure" that in this period, this was not the first time Moses witnessed such behavior. This sounds like the "straw that broke the camel's back." He "snapped."

It is well known among the jews that Moses killed the egyptian with his mouth, as it says in Isaiah 11:4

“But with righteousness He will judge the poor, And decide with fairness for the afflicted of the earth; And He will strike the earth with the rod of His mouth, And with the breath of His lips He will slay the wicked.” (Isaiah 11:4, NASB)

This is the reason that afterwards when he saw two Israelites fighting, one of them told him (Ex 2:14)

"Is it in order to kill me that you say, just like you killed the egyptian."

So I do not think you can call it a murder.

Why attempt to negate what is obvious? Moses murdered an egyptian murderer. Scan the scriptures. The hebrews were suffering and were treated like slaves. The Bible does not provide all the details but they were suffering, were mistreated, exploited and very likely, some were murdered or died of exhaustion. Moses, by murdering without the order explicit from Jehovah God Almighty, commited sin by breaking God's command: "you shall not commit murder". At that time, Moses did not know God's Law. But in the eyes of God, a murder is a sin, and every sin is a CRIME. Yet we all, being sinfull, God sent our Lord and Saviour Jesus Christ, who received instead of us the punishment we all deserve. This is to show that God had pity of us, and showed His Love and forgiveness to all those of us who have repented and accepted the Gift of Salvation in Jesus Christ. So God also forgave Moses for that crime because Moses repented.

I hear preachers call Moses a murderer all the time, and I consider it to be slander. It reads plainly; he was defending another, therefore it was not murder. Oddly, I never hear them call king David a murderer, even though he clearly had Uriah murdered to cover up his own sin. Preachers also regularly put down Jacob, whose position was clearly ordained by God, and fail to recognize that Esau was a shallow oaf who sold his birthright (despised it) for a lousy bowl of lentils.

Robin MauroRobin Mauro
1
2
Add a comment  |
-1
Want to improve this post? Provide detailed answers to this question, including citations and an explanation of why your answer is correct. Answers without enough detail may be edited or deleted.

Vengeance is God's. But It also says God uses people to enact his will, even if they are dumb to it. 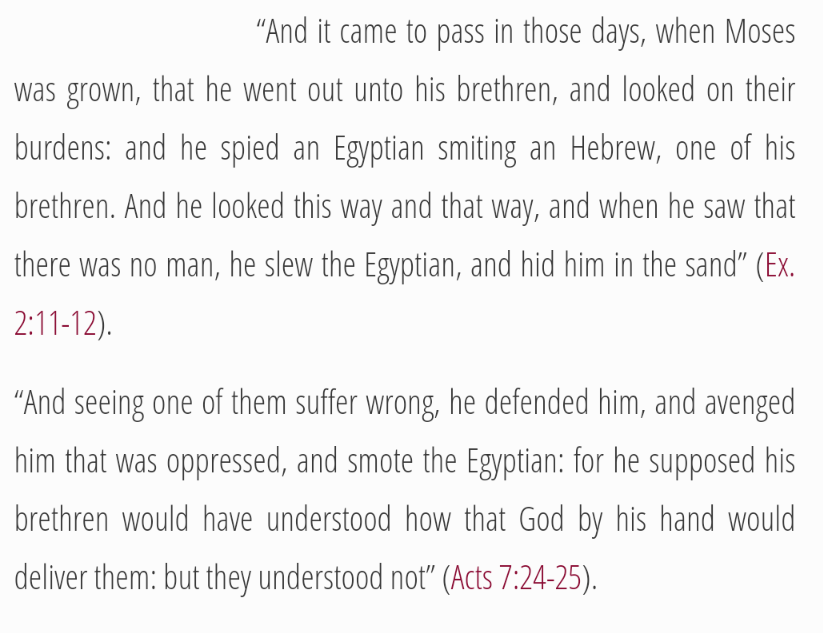 user41066user41066
1
1
Add a comment  |
Highly active question. Earn 10 reputation (not counting the association bonus) in order to answer this question. The reputation requirement helps protect this question from spam and non-answer activity.