Was the Passover meal to be boiled according to Deuteronomy 16:5-7?

In a recent exchange, Peter Enns responded to a review of his recent book, defending what he sees as a a contradiction between Exodus 12:8-9 and (from what I can gather) Deuteronomy 16:5-7. He seems to argue that while the former prohibits Israel from boiling the Passover meal, the latter commands it. Exodus says "don't bashal in water the meat" and Deuteronomy says, "bashal the meat."

I could only find one translation that agrees with Enns on the Deuteronomy passage. I examined the NIV, ESV, NET, HCSB, NRSV, NASB and KJV and all of them translate the command simply as "You shall cook and eat [the sacrifice]." The RSV (though not the NRSV) has, "And you shall boil it and eat it."

Who is correct here? Should the word there be translated as "boil" or "cook"?

Exodus 12:9 and Deut 16:7 appear in contradiction, because the former indicates there shall not be any boiling of the Passover (but only the roasting), and the latter passage states the opposite, which is the boiling (since the Hebrew verb בָּשַׁל means to boil, or to cook).

In the Pentateuch, the Hebrew verb בָּשַׁל in the Piel stem also occurs in the context of the preparation of the manna from heaven.

Numbers 11:7-9 (NASB)
7 Now the manna was like coriander seed, and its appearance like that of bdellium. 8The people would go about and gather it and grind it between two millstones or beat it in the mortar, and boil it in the pot and make cakes with it; and its taste was as the taste of cakes baked with oil. 9When the dew fell on the camp at night, the manna would fall with it.

According to Ex 16:21, the manna would melt when exposed to the direct heat of the sun, but we read (in the passage, above) that the Israelites would "בָּשַׁל" the manna in pots in order to make bread. In other words, if manna was so unstable that it would melt in direct sunlight like butter, and the Israelites were having to boil this manna in high temperatures (boiling water), then how would cakes or bread have been the outcome?

The conclusion is that within the Pentateuch, the Hebrew verb בָּשַׁל can mean to boil --or-- to cook. Thus the manna was cooked in pans to make cakes, not boiled. If we understand the Hebrew verb בָּשַׁל to mean to boil --or-- to cook then there is no contradiction between Exodus 12:9 and Deut 16:7 regarding the preparation of the Passover, which was prepared not with water (boiling), but with fire (cooking).

Exodus 12:8-9 mandates that the passover sacrifice be roasted with fire (צְלִי־אֵ֔שׁ), and prohibits its consumption when raw or when boiled in water (נָ֔א וּבָשֵׁ֥ל מְבֻשָּׁ֖ל בַּמָּ֑יִם). In contrast, Deuteronomy 16:7 uses the same verb (בֹשׁל) to describe the mandated preparation method.

The definitions given in HALOT for בֹשׁל (also בָּשֵׁל) for each stem are:

The translations listed in the question (NIV, ESV, NET, HCSB, NRSV, NASB and KJV) are compared with all morphological inflection ignored for ease of comparison (the English lemma is given), and the Hebrew stem is listed in the first column (pardon an image file, Markdown is horrible with tabular data): 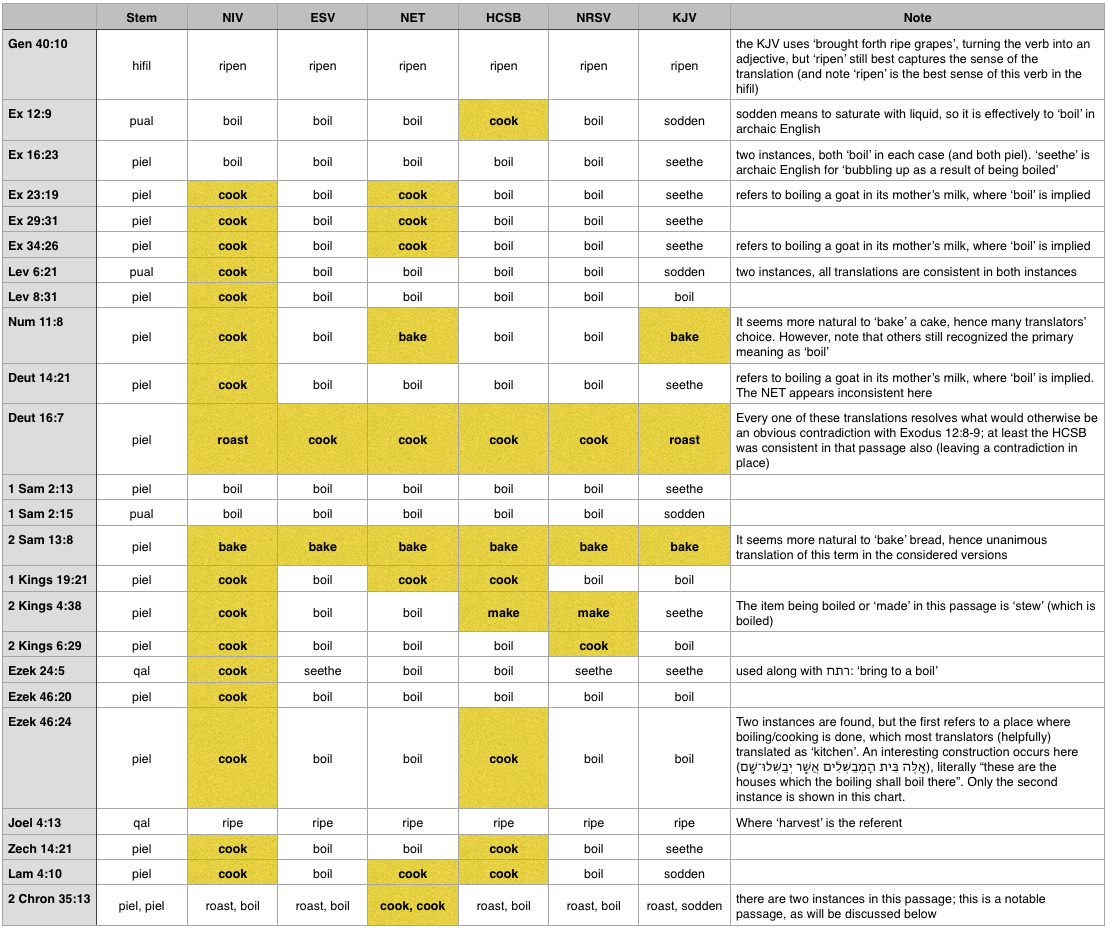 Below is a visual representation of the senses of the verb as generally translated into English. Note that 'roast' only appears once (in 2 Chronicles 35:13, which will be addressed shortly). 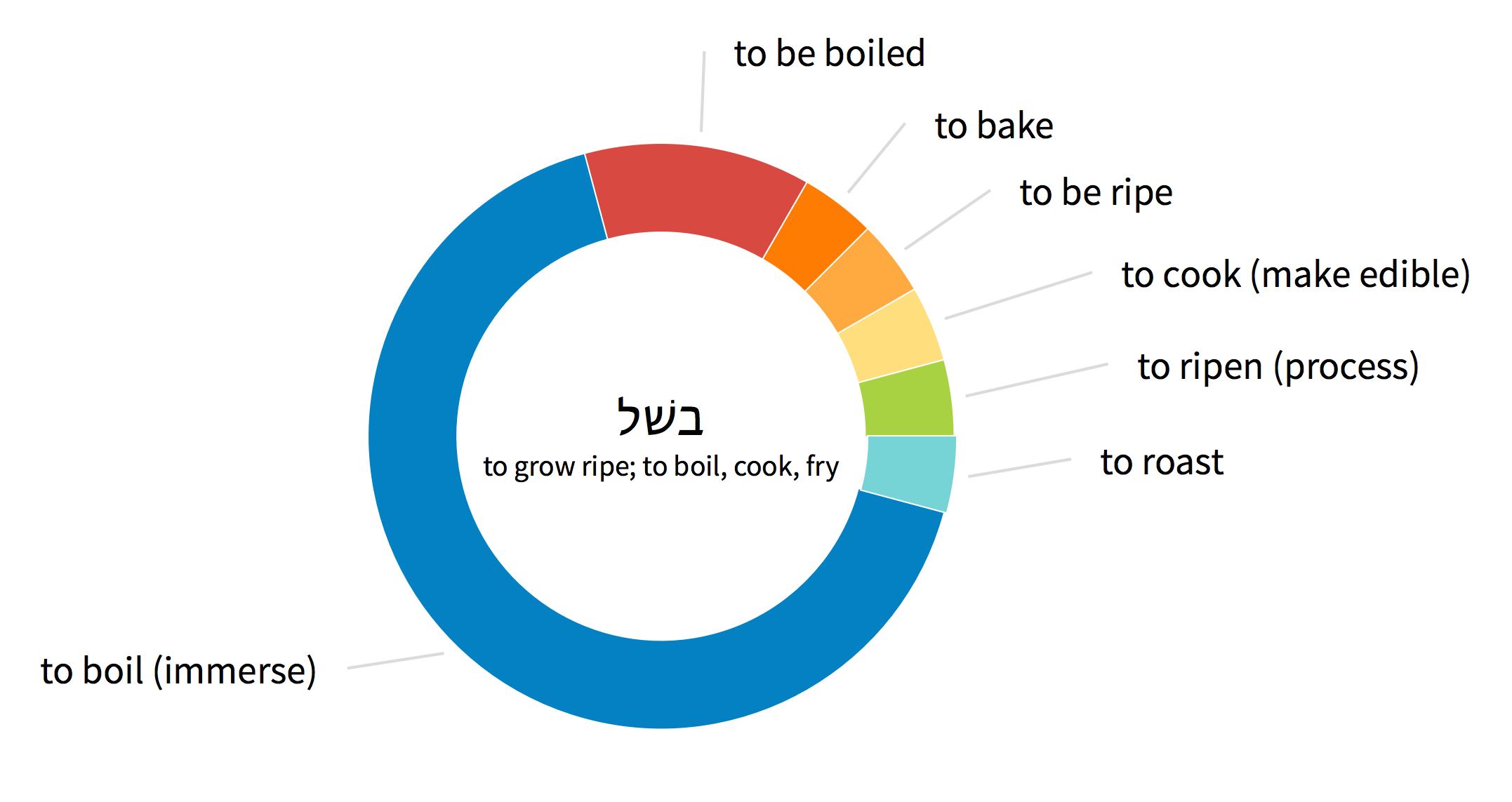 The Septuagint is also notable for Deuteronomy 16:7, where it resolves contradiction by saying, "and you shall boil and roast and eat..." (καὶ ἑψήσεις καὶ ὀπτήσεις καὶ φάγῃ).

Option 1: Different senses of the same word (no contradiction)

These definitions certainly allow for some ambiguity. As pointed out by Joseph, in Numbers 11:8 — it makes more sense to 'bake' a cake than to 'boil' it. Even aside from this example, 'cook' and 'boil' are relatively ambiguous in other places as well (especially since the idea of 'boiling the flesh' over fire appears in a few passages as well, see chart).

Regardless of whether 'cook' or 'boil' is a better English translation of this term in various contexts, the question at hand is whether the original readers would have seen Deuteronomy 16:7 in conflict with Exodus 12:9. I believe the answer is yes, and 2 Chronicles 35:13 is likely an early rabbinic attempt ('the Chronicler') to resolve this contradiction by harmonizing these two passages:

It's interesting is that most English translators use 'roast' for the same verb in the first sense and 'boil' in the second. This resolves what appears to be a tautology. But what if the redundancy is an intentional attempt to harmonize Deuteronomy 16:7 with Exodus 12:9? This would only be necessary if it were perceived as a contradiction.

A source-critical approach would argue that these differences are not surprising because they simply reflect the different practices of people at different times, and a later Rabbi or scribe observed this contradiction and attempted to harmonize it with the awkward construction of boiling it with fire (effectively redefining the word). The attempt to resolve the conflict is the best evidence that an actual contradiction exists.

This instance is a well-cited example of such a harmonization.3 The presence of 'according to the tradition' (כַּמִּשְׁפָּ֑ט) is often associated with such halachic harmonizations in Chronicles. This is cited as an example of contradiction and harmonization in many introductory texts and critical commentaries (e.g. most anything published by Oxford, Cambridge, etc.).

The biggest issue for me isn't whether to use 'boil' or 'cook', but rather translating the word consistently in these passages so that the contradiction isn't hidden from the reader (when it would not have been to those reading it in its original language).

In Exo. 12:3, the Israelites were commanded to take a שֶׂה for the Passover offering. A שֶׂה is a flock animal, particularly "of the lambs or of the goats" (Exo: 12:5: מִן הַכְּבָשִׂים וּמִן הָעִזִּים). It is essentially synonymous with צֹאן (cp. Exo. 12:21). While we rarely hear of goats being used for the Passover offering proper, they were permitted.

However, in Deu. 16:2, notice that the Israelites were permitted not only to sacrifice a צֹאן (again, this is a flock animal, either a lamb or goat), but also a בָקָר ("צֹאן וּבָקָר"). A בָקָר is a herd animal, like cattle or oxen.

I suppose, then, that the Passover chagigas could be boiled, whereas the Passover offering proper could not be, as roasting by fire signified a more hastier cooking method which the Israelites would have used during their hasty exodus from Egypt.

(1) Rashi, in his commentary on Deu. 16:2, regarding the word ובקר (uvakar), states, תזבח לחגיגה (tizbach lechagiga), that is, "You shall offer [it] for the chagiga offering." Ibn Ezra in his commentary on Deu. 16:2, regarding the same word, states, לשלמים (leshelamim), that is, "For the peace offerings" --- the peace offerings being another name for the chagiga offering. Ibn Ezra cites 2 Chr. 35:7 as another proof of the chagiga, for it says that King Josiah gave the people, "for the Passover offerings" (לַפְּסָחִים), thirty-thousand (30,000) lambs and kids of the flock, as well as "three-thousands bullocks/oxen" (וּבָקָר שְׁלֹשֶׁת אֲלָפִים). Remember, bullocks/oxen of the herd were not permitted for the Passover offering proper, which could only be a lamb or goat of the flock.

Not the answer you're looking for? Browse other questions tagged hebrew deuteronomy passover or ask your own question.

10
What is the significance of cooking the passover lamb by fire rather than boiling?