What is the best translation of Job 6:14?

I've looked at several translations, and they seem to be equally divided between these three translations. What is the right translation based on the Hebrew and the context?

The Hebrew text of Job 6:14 runs as follows:

Ambiguity has long been recognized as one of the "features" of the Hebrew of the book of Job.1 That enters into the picture here, although there are other issues, too.

Job 6 is Job's first response to the first, fairly gentle, intervention of Eliphaz (chs. 4-5) -- who appears to be the "senior" member of the triumvirate of friends -- who himself spoke only after Job's opening "soliloquy" (ch. 3).

In 6:2-13, Job has seemingly continued his soliloquy, as the themes carry on from where he left off in ch. 3. Verse 14 comes at a significant turning point. It isn't clear, up until this point, that he has even registered the presence of his friends who have come to keep him company in his misery (Job 2:11-13). At this very point, though he seems to lift his gaze. V. 14 launches a brief reflection on the nature of treacherous friendship -- still in the third person -- until finally, in v. 21, for the first time, he addresses the three of them directly ("Such you have become [hĕyîtem, 2nd pl.] to me").

Clearly 6:14 has an important structural/contextual significance, then.

The whole verse is deleted by some, either as an explanatory gloss on v. 15 (Fohrer), or because it is impossible to translate with confidence (cf. Hesse).

A literal translation of the Masoretic Text as it stands would go something like this:

The overarching problem is: how does 14a relate to 14b at this point? That involves two subsidiary, interrelated issues:

We take these two in turn:

The Septuagint rendering is:

It could lend support to the emendation to "reject", and has a reflex for wə- in δὲ [de], but it takes the otherwise clear 14b in a very different direction.

What these three have in common is (a) turning the whole verse into a single clause (instead of two); and (b) making the "subject" of "14a" identical with the subject of "14b". Modern versions often follow the lead of these renderings; see, for example, the marginal notes in the RSV which persist into both the ESV and the NRSV.

This is a difficult verse! Hopefully, even this brief and selective review of the two main issues it contains will show why it is so difficult. It should also hint that there is no "right translation based on the Hebrew and the context", because the choice of translation depends on a number of related judgments, and one can take up different positions on these for good reason. These, however, seem to me to be the two main options:

It may be that context needs more reflection, as if the latter choice is made, then it would seem best to take 6:14 not as the introduction to a reflection on treachery, but as the conclusion to Job's introspective soliloquy in vv. 1-13 (as in fact the Judaica Press translation has it). But that has issues too ... and so it rumbles on.

There are three words in the verse which provide ambiguous meaning, however, the Masorah Parva of the Masoretic Text helps to shed light to the verse. In spite of these difficulties, the MT can be seen to yield good sense.

The first and most significant problem in the verse is the word for "friend." If the Hebrew word is רֵעַ, then the word also contains the prefix מִן (or מֵ), which in conjunction with the possessive masculine suffix means from-his-companion. (The translators of the Syriac, Latin, and Greek versions of the Hebrew Bible inferred this meaning.) If the word here, however, for "friend" is מֵרֵעַ, then the word in conjunction with the possessive masculine suffix means his friend. In other words, both words in the Masoretic Text appear exactly alike (and both refer to companion/friend, respectively), but one contains a preposition and the other one does not.

Another problem is the phrase לַמָּס, which means to (for) one despairing. In lieu of this word, and based on multiple manuscripts, the editors of the BHS have suggested the Qal infinitive construct of לִמְאָס, which means despising, grudging, scorning. The evidence for this variant is provided in de Rossi's Variae lectiones Veteris Testamenti... (1788), vol. 4 p. 106: 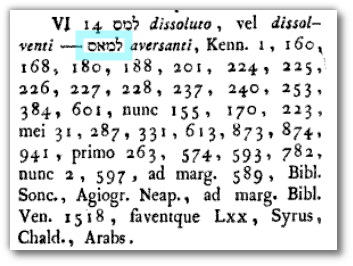 According to Gensenius ( §114f, §114o, and §115e), if in fact the infinitive construct (as in our case with לִמְאָס) were present in this verse (and as suggested by the editors of the BHS and found in a number of Hebrew manuscripts), then the clause of this verse could read as follows, since the noun in the clause could function as the subject of the infinitive construct.

N.B. The conjunction which connects both clauses (within gnomic poetry) is the waw copula (Gesenius §161a).

There is yet a third factor to consider before concluding this discussion. At the end of the second clause appears the verb יַעֲזוֹב, which for ancient Hebrew contains the waw Matre Lectionis. These letters are sometimes known as consonants, but they have been "helpers" to identify vowels (begun at a time before the Masoretes added the vowels and accents and spaces between words). Waltke and O'Connor explain the sporadic nature of these "helpers" as now present in BHS. That is, the proto Masoretic Text had no vowels and spaces, which had led to confusion with homophonic words (such as the example with the two words for "friends" as noted above).

Anyway, in the margin of Job 6:14 of the BHS appears the Masorah Parva, which should correspond to references to the Masorah Magna at the foot of the Hebrew Text (which provide more amplification of meaning and references). In this instance, in the Parva (marginalia) there are only the words ‏ב̇ מל̇ בליש‎ written in Aramaic, which phrase reads that this particular verb appears in the Masoretic Text "twice written out with vowel letters in Hebrew." At the foot of the text there is no corresponding Masorah Magna to reference. The editor of the Masorah in BHS (Georg Weil) annotated "Mp (Mesora Parva) sub loco," which means that there is some sort of problem with it, and there is no related listing for this reference in the Masorah Magna.1

Weil died before he could produce the volume in which these (many) "sub loco" entries would be discussed. Many of them remain obscure,2 and it isn't clear what Weil intended to note for יַעֲזוֹב in Job 6:14. BHS is meant to reproduce Codex Leningradensis, but it reads this way:

Here, the marginal note (meaning "unique occurrence [of this form]") is, in fact, correct, and appears this way in other medieval Hebrew manuscripts. Oddly, however, the highly esteemed Aleppo Codex has this:

Here, the marginal note suggests there are two occurrences of this form. This is, in fact, an error (unless the "missing" part of this codex contained a second example: the same form but with the "defective" spelling, i.e., no vowel letter, occurs in Genesis 2:24). Perhaps this is the "problem" that Weil had in mind, but we can only guess.

Finally, in Job 6:14-20 appear in narrative format in the third person, which includes the verse under discussion. That is, Job is alluding to himself and/or his companions in the third person until Job 6:21, when he then begins to address the three "friends" in the second person.

In summary, while there is no exacting certitude as regards the "correct" translation of this verse, the editors of BHS provide an alternate reading for לַמָּס in order to facilitate the smooth reading of the verse. In this regard, then, the NASB takes and assumes the Masoretic Text as the correct reading, which assumes the verb in the first clause is רֵעַ, which contains the prefix מִן (or מֵ):

Job 6:14 (NASB)
14 For the despairing man there should be kindness from his friend;
So that he does not forsake the fear of the Almighty.

While there is grammatical ambiguity of the precise nature of the wording of this verse (because of homophonic-sounding words in Biblical Hebrew), the meaning notwithstanding still comes out quite clear: Instead of helping Job as a friend/companion, Eliphaz was provoking Job to react toward the Lord.

1 When we check the Interlinear Scripture Analyzer (http://www.scripture4all.org), we find that another appearance of this verb in the Masoretic Text is 2 Ki 21:22. There we find that King Amon forsook the Lord. This verb does not contain the waw Matre Lectionis, however. In other words, there are only two places in the Hebrew Bible that the verb appears in reference to rejecting/forsaking the Lord: Job 6:14 and 2 Ki 21:22.
2 One monograph has appeared which attempts to work through the examples in the Pentateuch: D.S. Mynatt, The Sub Loco Notes in the Torah of the Biblia Hebraica Stuttgartensia (BIBAL Press, 1994).

"By one who withholds kindness from his friend and who abandons the fear of the Almighty?"

Not the answer you're looking for? Browse other questions tagged hebrew job textual-emendation or ask your own question.

15
“Overcome” vs “comprehend” in John 1:5
5
Textual criticism of the Hebrew bible and the rule of the ‘lectio difficilior'

13
What translation philosophies have caused such a wide variation in the translation of *tachash* skins?
8
How should רָגַז be translated in Psalm 4?
1
Could Deut. 30:11-14 be a forward-looking prophecy?
10
Judges 3:9 and the meaning of זעק
7
The meaning and reference to מוג in Amos 9:13 related to that of Amos 9:5
6
What is the relationship between the prostitute and the loaf of bread in Proverbs 6:26a?
8
What is the textual basis for the Genesis 6-9 flood being global?
2
Two words for love in John 21:15–17
5
Isaiah 14:6 - KJV/NKJV disagrees with other translations?
1
( Job 36:17-19 ) Is Job being punished like the wicked? Why would wrath entice anyone to scoffing?