And whenever the ark set out, Moses said, “Arise, O Lord, and let your enemies be scattered, and let those who hate you flee before you.” And when it rested, he said, “Return, O Lord, to the ten thousand thousands of Israel.”

There are two funny looking not-really-letters around this passage:*

One of our own answers suggested that this is a piece of evidence supporting fragmentary sourcing of the material. The wikipedia article indicates some rabbinic support for this, but there and elsewhere I've run across several other possible explanations that I can't quite fit together:

I'm curious if anything more definitive has been established in the scholarly literature about:

* There are seven more in Psalm 107, also somewhat mysterious, and inverted in various directions. That's all as far as I'm aware. Image modified from: http://www.sofer.co.uk/html/nun_hafucha.html

The question as posed has done pretty much all the "homework" already! Here is how they look in Codex Leningrad: 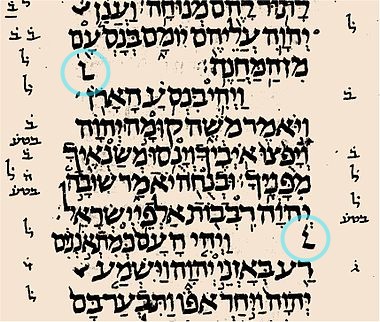 In the scholarly literature, a fairly authoritative answer comes from Israel Yeivin's discussion in Introduction to the Tiberian Masorah (Scholars Press, 1985), § 81 (pp. 46-7) as well as Emanuel Tov, Textual Criticism of the Hebrew Bible (Van Gorcum, 2001), pp. 54-55,1 who reports much the same information.

The "inverted nuns" are in origin a "misunderstood scribal sign" from Greek scribal practice, the reversed "lunate" sigma, indicating that "the section enclosed ... did not suit its present place in the text". Yeivin and Tov both cite Sifre Numbers (BaMidbar) §84:

The section ויהי בנסע הארן is naqud (dotted) before it and after it because this is not its place. The opinion of Rabbi is that it forms a book by itself.

It is worth noting (as Yeivin in particular points out) that there are seven more occurrences of the inverted nun in Psalm 107, although these are not represented in printed editions, nor are they consistent in the Tiberian manuscript tradition. While the explanation from ancient Greek text criticism offers an appealing explanation of the Numbers passage, the same is not true for Psalm 107: "no satisfactory explanation for their use here has yet been offered" (Yeivin, p. 47). All seven fall within Ps 107:23-28, 40:2 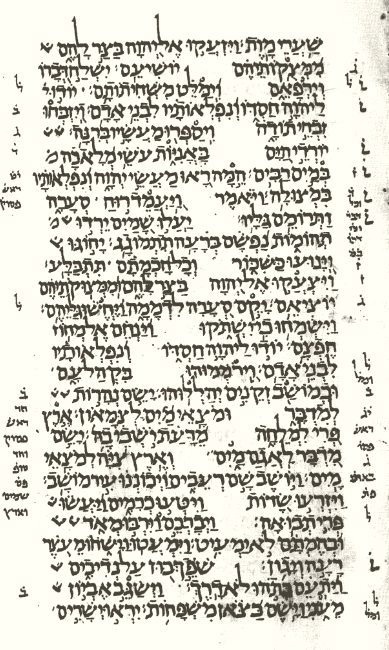 Still, the Sifre Numbers explanation is echoed in the commentary given by Rashi:

He made marks for it [this passage], before it and after it, as if to indicate that this is not its proper place [in Scripture].

Of course, the question even then is, "So why was it written here?"!3 And to this question, the answers multiplied. Tov's discussion gives some pointers on this; a fuller treatment on the later implications of the inverted nuns is found in John Barton's "What is a Book? Modern Exegesis and the Literary Conventions of Ancient Israel" - well worth a read if this is of interest.4

As ever, one must be extremely cautious when it comes to dating strands within the rabbinic tradition. The talmudic passages citing earlier authorities on the Numbers text come from much later periods, of course. It might be that they are sound, but hard to know. As circumstantial corroboration of a relatively early date (i.e., 1st C. CE), one can add Tov's mention of 11QpaleoLeva which includes a "bracket" reflecting the sigma/antisigma text-critical marks at Lev 18:27:5 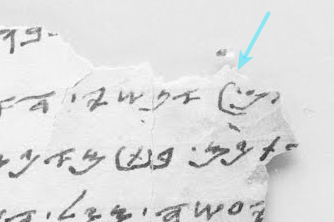 It lends credence to the suggestion that the practice could plausibly date back to the Graeco-Roman period. (And as a little curiosity, Tov further asserts that the sigma/antisigma scribal marks are the origins of the very parentheses I've used for this sentence, to show that it is not integral to the main text.)

This was taken from the Shabbat Tractate of the Babylonian Talmud(Mishna):

The rabbis taught: Before the passage [Numb. x. 35]: "And it came to pass when the ark set forward, that Moses said, etc.," and at the close of the next verse, the Holy One, blessed be He, made signs (the inverted letter Nun, which must be inserted in the Scroll) in order to signify that this is not the proper place for the two passages; but Rabbi says, that this is out of the question, and that the two verses form a valuable book in themselves. We have heard from R. Samuel ben Na'hmeni in the name of R. Jonathan, that we have not a Pentateuch but a Septateuch 1 (i.e., we have not five books of Moses, but seven). Would this imply that R. Samuel holds with Rabbi and declares that there are seven (because the two verses, which form a book in themselves, divide Numbers into two books)? Who is the Tana, however, that differs with Rabbi? He is R. Simeon ben Gamaliel, for we have learned in a Boraitha: R. Simeon ben Gamaliel says, that these two passages will in the future be removed and put in their proper place. Why were they put here, then? In order to make a separation between the two scourges that befell the Israelites. Which was the second scourge? The one that follows immediately afterwards [Numb. xi. 1]: "And it came to pass, that, as the people complained in a manner displeasing to the Lord," etc., etc. And which was the first? The first was as it is written [ibid. x. 33]: "And they set forward from the mount of the Lord, which, according to R. Hama b. Hanina, means "and they departed from the ways of the Lord." Which is the proper place for the two passages? Said R. Ashi: In Numbers ii. (where it is decreed how every man should walk in the wilderness, and the end of the chapter stating that every, man did as he was commanded, should be followed by those two verses).

This is the tractate quoted by Rashi in his notes on Num 10:35-36. R. Simeon ben Gamaliel appears; this is the son of R. Gamaliel of Acts 5:24 and 22:3 fame, which clearly puts this passage at least during the 1st century AD. From the Mishna, it is determined that they are intentional; although numerous Rabbinic luminaries have expressed their views concerning these marks.

It's important to understand that they are notation, not to be read as part of the text.

From a layman's view, someone without any Hebrew background, it would seem to indicate a 'special distinction' for this particular passage, and indeed, here we see Moses 'commanding' God to "move" and to "stay" with His people, as He manifests His Presence with them-something unheard of in previous chapters yet apparent here. It almost seems a 'special point of emphasis' must be given mention to it, as "what man can command God, and God take heed of it".

In other words, Psalm 107 presents the picture of the wilderness wanderings of the Israelites, when (according to the Aleppo Codex) verses 23-28 and 40 are taken as parenthetical. If and when the inverted nuns are otherwise ignored (and the psalm is simply read as a normal whole) then the Psalm appears as a four-portion picture summary of the Lord delivering from distress: that is, lost travelers in the dark arriving to their destination (vv. 4-9); prisoners released from confinement (vv.10-16); the hopeless sick restored to good health (vv.17-22); and sailors lost at sea delivered to port (vv.23-32).

Therefore the prevalence of the use of the Leningrad Codex by Western scholars (per the Biblia Hebraica Stuttgartensia) has made this nuance difficult to see, since there is no reference in the footnotes of the BHS to indicate this variant reading (and interpretation) as evident from the Codex Aleppo.

The Biblia Hebraica Stuttgartensia is based on the Leningrad Codex, and is the oldest dated manuscript of the complete Hebrew Bible. However, the Aleppo Codex is the oldest (next largest) dated manuscript of the incomplete (Masoretic) Hebrew Bible. In other words, the latter predates the former by several decades according to sources cited on the respective Wikipedia sites.

If one assumes that the inverted nuns have parenthetical value, then reading the text of Psalm 107 does not make apparent sense in the Codex Leningrad. However, if one reads the same psalm in the Codex Aleppo, then the psalm presents the picture of the wilderness wanderings of the Israelites, whom the Lord delivered into the Promised Land. Thus the Masoretes of the Codex Aleppo annotated their manuscript to provide the reader an interpretation of the psalm sans the references to sailors and sea-faring (and wayward princes).

Thus when reading Psalm 107 with the respective verses in parentheses (according to the inverted nuns as noted in the Codex Aleppo), the reader would read the Psalm as noted here. Please note that the words highlighted in blue in vv.29-30 would reflect a more nuanced but yet literal translation.

These differences between the two Masoretic codices do not imply errors in transmission. The editors of the Masoretic texts in Aleppo, Syria, however saw some nuance in Psalm 107 that hearkened to the wilderness wanderings, where the inverted nun in the Masoretic texts had first appeared in (Numbers 10:35-36). That is, by using inverted nuns in Psalm 107, the Masorete editors in Aleppo were making an apparent allusion to the wilderness wanderings and the deliverance of the Lord to bring the Israelites into the Promises Land.

The suggested "parenthetical" Psalm 107 would therefore align to the Lord delivering from distress and bringing his people to rest, which is the Promised Land. Furthermore, the absence of any notation in the margins (Massorah Parva) or at the foot or end of the book (Massorah Magna) in any Masoretic codex contributed to confusion, since the original Masorete editors who made this observation must have assumed that any reader of the Hebrew texts would "get it" without any clarifying explanation. That is, if the Codex Leningrad appeared later by several decades, and these copyists were borrowing from the the Codex Aleppo (or other parallel Vorlagen extant at the time), and saw the inverted nuns (with no apparent explanation in any available Massorot), then the error of annotating verses 21-26 with the inverted nuns (instead of verses 23-28) may have occurred in the Codex Leningrad because the copyists of that text did not "get it."

Not the answer you're looking for? Browse other questions tagged hermeneutical-approaches numbers masoretic-text or ask your own question.

5
Are the Hebrew Scriptures in general to be understood as continuous discourses or fragmental remains of much larger collections?

3
What does the phrase 'unclean until the even' refer to in Numbers 19:7?
2
Understanding the purpose of the trumpets in Numbers 10?
3
What were the four standards around which the tribes of Israel were camped (Numbers 2:1-34)?
5
In partial sentence Numbers 16:1 what did Korach take?
2
Why do all the census numbers in Numbers 1 end in zero?
0
What does "sanctify me" in Numbers 20:12 mean?
2
What specifically were the articles of the sanctuary mentioned in Numbers 31:6?
2
what does "bore out eyes" at Numbers 16:14 mean?