Is there any reason to think that Mark 7:19 has a later addition?

For it doesn’t go into their heart but into their stomach, and then out of the body.” (In saying this, Jesus declared all foods clean.)

Every time I see a parenthetical note in an ancient text, I feel like it was a later addition from a scribe.

Does our oldest manuscripts contain that part of the verse? Even it does, is there any reason to believe that it was a later addition?

There are no important textual variations here: all our manuscripts include this parenthetical. There's no manuscript evidence whatsoever that this is a later insertion. (See this list of textual variants as well as the lack of any variants listed at the NET bible.) Thus we can be completely certain that the head of the manuscript tradition (that is the most recent common ancestor of all of our current documents) had this parenthetical.

It does not necessarily follow that the original text had this parenthetical. For example, many experts think part of Galatians 4:25 and/or 1 Corinthians 14:34–35 were marginal notes written by one of the earliest readers of the text rather than part of the original, despite the fact that all our texts contain these verses. This is called a "conjecture" and conjectures with no textual evidence at all tend not to be widely supported. (With the above examples there are at least some interesting textual variations even some version is always present.)

I was able to find at least one author (Ellicot) who conjectures that Mark 7:19 was an early marginal comment. But there doesn't seem to be much evidence to back it up.

This is not a question of textual criticism, nor is there any reason to reject the authenticity of Mark 7:19. It is entirely a question of interpreting the text. Let us look at the oldest versions:

The participle καθαριζων “purifying, purging” can be construed either with αφεδρων “excretive system”, or with the subject of the verb “he said”, that is: Jesus. So the Greek text can mean either that the intestines purify the foods, or else the quotation can end with the word εκπορευεται, followed by the statement that “he” (Jesus) thereby was “purifying all foods”. The Latin has the same ambiguity (purgans can go with secessum, or with the subject of dicebat), but the Pshitta allows only the former interpretation (ܕ݁ܰܡܕ݂ܰܟ݁ܝܳܐ is feminine and must therefore go with ܬ݂ܰܕ݂ܟ݁ܺܝܬ݂ܳܐ). The Vetus Syrus, however, allows both interpretations, though the latter (with Jesus as the referent) seems very forced.

Jesus was a Jew and was speaking to Jews. Therefore when it says he was declaring all food Kosher, he was talking about what was food to a Jew not what is food to a western mind (even if it was Mark who pened this in). Besides the problem at hand was not the "Jewish" food but it was not washing your hands before you eat the food thereby making the food unclean or unfit to eat....Sorry but cats, rats and pigs were never on the Jewish food menu.

In Act 25:7-8. When Paul came in, the Jews who had come down from Jerusalem stood around him. They brought many serious charges against him, but they could not prove them.

He could not have said he did nothing against the Jewish law if he didn't eat kosher. Not eating kosher was definitely against the Jewish laws. Paul traveled and preach too many different people but yet he stayed kosher. Yes I know you may quote Peter's vision but the Holy Spirit revealed that the Gentiles we're now acceptable to God it had nothing to do with food...In Acts 10:28 Peter said : " And he said unto them, Ye know how that it is an unlawful thing for a man that is a Jew to keep company, or come unto one of another nation; but God hath shewed me that I should not call any man common or unclean." Also it says when the Jews heard that Peter went to Cornelius's house they did not praise God for freeing them from kosher laws but they they understood what Peter's vision ment ...that now the repentant Gentiles, who were unclean, are considered clean and I praise God for now accepting the Gentiles who believed. Thats found in Acts 11:18. "When they heard these things, they held their peace, and glorified God, saying, Then hath God also to the Gentiles granted repentance unto life.". They did not thank God for freeing them from the Jewish kosher laws....Do not impose something God never intended into his words. You get stuck in your great Greek knowledge and miss the context of what's being said.

In checking this I first looked at the KJV, which says

Because it entereth not into his heart, but into the belly, and goeth out into the draught, purging all meats?

Where is the "In saying this, Jesus declared"? Its not there. Now its not normal for the KJV to be the one to omit words. So I looked at the Greek.

So there is an addition here in the NIV that is not in the Greek, namely "In saying this, Jesus declared"

Moved by a compelling desire to let the text speak for itself, I present Mark 7:18,19 as follows:

18 And he said to them, "In this way you, yourselves, are also being unwise. Do you not understand that anything outside, having entered into the man, is not able to defile him, 19 because it has not entered into the heart of him, but into the belly? Then after purifying all the food, it is discharged into the toilet." 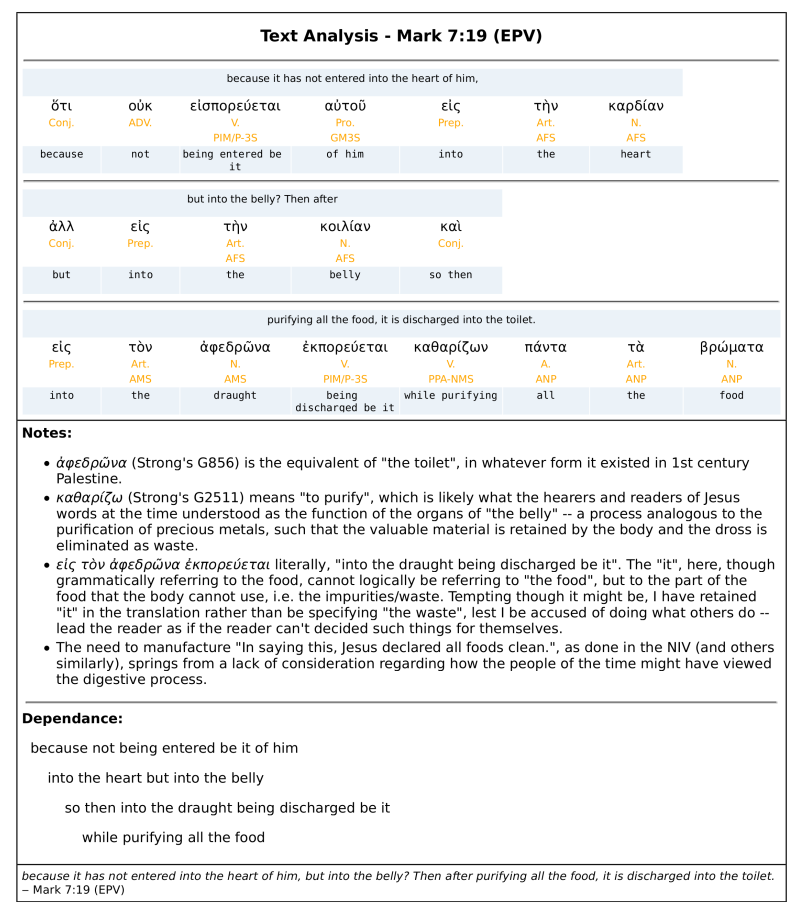 @davidbrainerd in his answer was right to draw attention to this verse, and I submit my answer to show the Greek for all to see, that there is clearly textual support for his concern.

The need for the bracketed text of the NIV (and others) was brought about by a modern preference for WH Greek, rather than TR. However, if it is okay for the NIV translators to accept an irregularity in regard to the Greek of 1 John 5, without the need to manufacture something that is not in the Greek, then so they should in regard to Mark 7:19.

7
Mark 7:19 - Does Jesus Really Declare "All Foods Clean?"
7
How does passing food through the body make all foods clean, as per Mark 7:19 in the modern versions?
6
In Acts 10, why does Peter not already know that he can eat foods previously regarded as 'unclean'?
3
Why is there a question mark at the end of Mark 7:19?

10
What role should textual (lower) criticism play in biblical hermeneutics (if any)?
3
Did the New Testament Writers Rely on the Hebrew Text?
4
What factors attest Nehemiah 7:68 is, or is not original to Nehemiah?
1
In Hebrews 1:3 is "by himself" original?
2
As a Trinitarian attempting to validate the authenticity of the Received Text, should Mark 16:19 end "and sat on the right hand of God"
7
How does passing food through the body make all foods clean, as per Mark 7:19 in the modern versions?
0
Mark 7:19 all foods clean: NKJV vs NIV