Moses' manufacture of the "bronze serpent" - what bronze?

So Moses made a bronze snake and put it on a pole, so that if a snake had bitten someone, when he looked at the bronze snake he lived. [NET]

Where would Moses probably get the bronze to fashion into a serpent when he was leading the Jews around in the desert? Has there been any informed discussion on this point?

The (relatively) small amount of bronze needed to make that serpent/snake (or נְחַשׁ נְחֹשֶׁת nĕḥaš nĕḥōšet) in the story of Num 21:4-9,1 even if it was as large as the monument now on Mount Nebo in Jordan,... 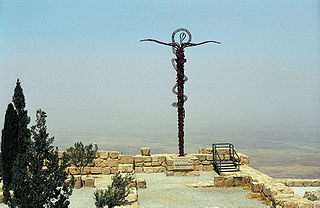 So where did all this metal come from? One possible answer would be found in the motif of the "despoiling of the Egyptians".2 It is found in three passages in Exodus, twice in anticipation, and once in fulfilment:

However, there is no "bronze" (or copper) listed among the spoil taken from the Egyptians, and the listing of "gold, silver, clothes" (as it happens, the same plunder that Achan took to such disastrous effect in Joshua 7:21) appears to have to do with the enriching of the community on departure from Egypt, not the resourcing (directly) for tabernacle furnishings.

On the other hand, the tabernacle resources do come from the gifts of the people:

Thus, solicitation and gifts of "bronze/copper" for the tabernacle from the Israelites implies that the metal is already in their own possession. However, the immediate context of Num 21:9 -- the "serpent" episode of OP's interest -- does not depict Moses soliciting metal for the purpose. It is also possible (see the studies in note 1, below) that the bronze serpent was fairly small (but big enough to be seen?, Num 21:8), so not much was needed.

It remains possible, too, that the copper was accessed en route. Commentaries on the book of Numbers in recent years draw attention to the copper mines in the Timnah Valley north of Aqaba as another possible source of the metal in this connection.3

In summary, the biblical narrator is not interested in whether it originated from the Egyptians, or was already in possession of the Israelites, or sourced in the Sinai. Any of these three, however, are possibilities for curious modern readers.

While it is unclear whether a nomadic people would have the means to mine, smelt, and smith metals sufficient to the needs mentioned in Exodus and Numbers, the Israelites may have accessed such technology and materials through their Midian and Kenite relations who lived nearby. Both groups were known for their mining and metalworking skills.[1]

The Midians of the northwestern Arabah were said to be descendents of Abraham through his wife Katurah (Gen.25:1–2), and it was during the 40 years Moses shepherded for his father-in-law, Jethro, “the priest of Midian,” that Moses met YHWH at Mt. Horeb (Ex.3:1). When Moses returned to the mountain with the freed Israelites, Jethro met them, offering a celebratory sacrifice and providing counsel to Moses and the elders (Ex.18). If Jethro is the same father-in-law mentioned in Judges 1:16, he was also called a Kenite, thought to be a subtribe of Midian. The Kenites journeyed with the Israelites through the desert to Canaan where they were valued for their more advanced artistic skills; they were later absorbed into the tribe of Judah.[2]

Archeological evidence confirms Midian involvement in advanced copper mining and production, in collaboration with the Egyptians and Amalekites, in Timna just north of the Gulf of Aqaba during the period in which the exodus may have occurred.[3] Midians continued operations after the Egyptians retreated in the mid-12th century BCE, and they also converted the former Hathor temple into a tented desert shrine, excavated in the last century and found filled with Midianite pottery and metal jewelry. Nearby was found a copper serpent with a gilded head, often noted as reminiscent of the serpent described in Numbers 21:6-9.[4] The Timnah Valley is now an Israeli nature reserve and educational park, including a life-size facsimile of the biblical tabernacle.

Egyptian copper mines were in full production and bronze articles existed in abundance. If, as in accordance with God's directive, the people plundered Egypt (justified because it was the fruit of their slave labor), it is highly likely they carried plenty of bronze to use for purposes of fashioning the serpent.

I'd say it's likely the Biblical writers overlooked the bronze/copper taken by the Israelites as they left Egypt. Their point might have been to show the plunder of more valuable goods.

Not the answer you're looking for? Browse other questions tagged history exodus numbers moses or ask your own question.

13
Did all the Israelite women and the male Levites 20+ years old die in the wilderness or not?
3
Was the "abomination of desolation" Caligula's proposed statue in the Temple?
1
How Should "keep" be defined in Acts 15:5
2
Did God command the making of graven images, in Exodus and Numbers?
1
In Hebrews 12:18 what does the author mean by "for you have not come to what could be touched"?
1
(2 Kings 18:4, Genesis 3) Serpent worship and reading Genesis/Exodus
1
How Did Moses Build The Bronze Serpent and How Long Did It Take For Him To Do It?
1
Was faith required to be healed in Numbers 21:8?