Sirach 43:26 (KJV) “By him the end of them hath prosperous success, and by his word all things consist.”

Colossians 1:17 (KJV) “And he is before all things, and by him all things consist.”

Is Sirach 43 the background for Paul's argument that by Jesus, as the word of God, all things consist?

The KJV that you quote indicates a possible connection between the verses primarily because of the word consist.2,3 However, you can see here that the bolded words are different (in lexeme, in tense/aspect, and probably in voice4), albeit semantically related and both reasonably translated consist (if you live in 1611). The rest of the words share only τὰ πάντα (all things), καὶ (and), and ἐν (in, here probably by), all extremely common words.

The NETS and the NRSV both render Sirach, “and by his word all things hold together.” The latter also uses hold together for the Colossians translation, reflecting the difficulty conveying a difference in English.

Although Paul was most fond of quoting the LXX, he does make references to the Hebrew texts, and it’s possible (probable?) that this was available to him.5 Fortunately, this text is also now available to us. You can see the Hebrew here, including the rough translation “and his will is accomplished by his words.” If this text was available to Paul, he doesn’t seem to be quoting (translating) it.

The only “commentary” I could find suggesting this connection is this, which doesn’t interact with the original languages or back up its claims. Even this website that includes some fairly speculative links between NT and apocryphal works, does not mention this possible connection.

1. There seems to be a textual discrepancy in 26a, as the KJV is somewhat different than the Greek texts I can find. However, neither variant has anything similar to Colossians in this part. 26b is in question and is consistent between texts.

2. This mental connection is probably heightened by our own unfamiliarity with this older usage of “consist”.

3. Actually singular in Greek - a neuter plural subject taking a singular verb - but the syntax requires a plural verb in English.

4. σύγκειται could be deponent and considered active, but it seems more likely to me to be functioning as a passive of συντίθημι. I’m open to changing my mind about this, however, as this usage isn’t even included in BDAG.

5. Sirach was originally written in Hebrew ~132 BCE. It was translated, supposedly by the author’s grandson, into Greek, the text that has been traditionally included in the LXX and is the basis of Latin Vulgate and KJV. Over the past ~150 years, fragments of the Hebrew text have been recovered, and currently Hebrew texts of are extant for about two-thirds of the book. Both the introduction to the NETS translation and the Catholic Enclyclopedia have nice summaries of this history.

In Sirach 43 the author is poetically praising the Creator as manager of the chaos and wild creatures of the deep. What is scary and dangerous to men is under his absolute control and function as he sees fit.

...By his wisdom he calmed the great oceans and placed the islands there. 24 Sailors tell about the dangers of the sea, and we listen to their tales in amazement. 25 In the sea are strange and marvelous creatures: huge monsters and all kinds of living things. 26 Each of the Lord's messengers succeeds at its task. Everything is held together by his word. 27 We could say much more and never finish, but it all means this: the Lord is everything. 28 How can we find the power to praise him? He is greater than all his creation. 29 The Lord is awesome in his greatness; his power is overwhelming.

In Colossians 1 Paul is teaching these gentile saints that God has placed Christ at the very top of the organizational chart (well, excluding his God and Father which it goes without saying is superior to Christ). This is a theme also found in the sister letter to the Ephesians:

[Eph 1:15-23 ESV] (15) For this reason, because I have heard of your faith in the Lord Jesus and your love toward all the saints, (16) I do not cease to give thanks for you, remembering you in my prayers, (17) that the God of our Lord Jesus Christ, the Father of glory, may give you the Spirit of wisdom and of revelation in the knowledge of him, (18) having the eyes of your hearts enlightened, that you may know what is the hope to which he has called you, what are the riches of his glorious inheritance in the saints, (19) and what is the immeasurable greatness of his power toward us who believe, according to the working of his great might (20) that he worked in Christ when he raised him from the dead and seated him at his right hand in the heavenly places, (21) far above all rule and authority and power and dominion, and above every name that is named, not only in this age but also in the one to come. (22) And he put all things under his feet and gave him as head over all things to the church, (23) which is his body, the fullness of him who fills all in all.

In other words, Paul wants the Colossians and the Ephesians to understand that at the end of the day the believer is not pulled in different directions by different regimes but all ultimately answer to the higher authority.

I have a fascination with sacred architecture. Recently I was pondering this Indian temple design which, like sacred architecture all around the world there is essentially a visible representation of the principalities and powers that comprise the invisible world: 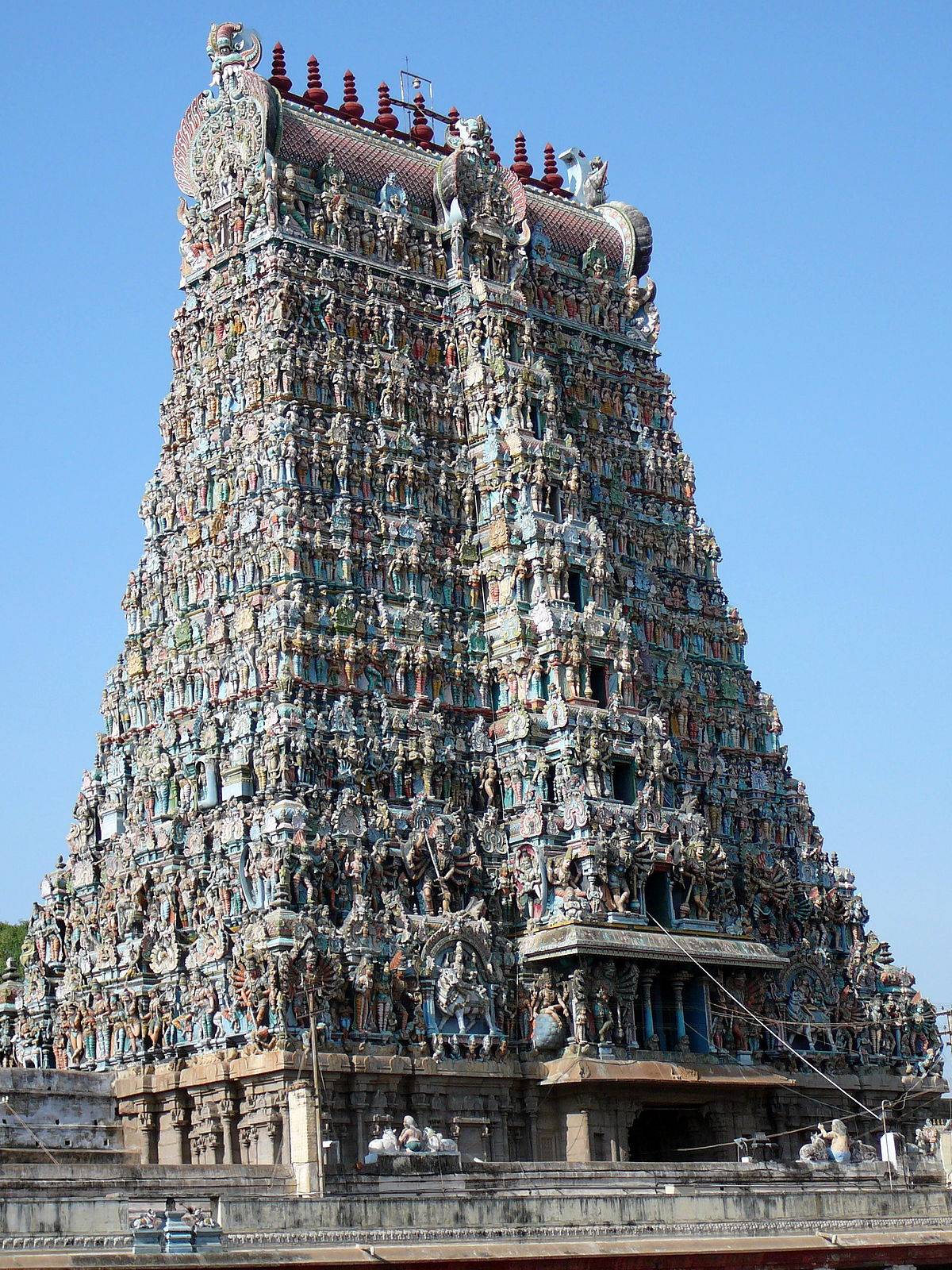 There are principalities on the lowest level, then fewer on the next level above and so on until you get to up to the tippy top where the supreme gods are.

However, Paul says that the "son of man" was placed way higher than that - "FAR ABOVE all principalities and powers" and "all things under his feet".

This thought then is somewhat parallel to Sirach's. Sirach celebrates God's control of the entirety of the sea and Paul teaches that Jesus, from God's right hand and by God putting everything beneath his feet, so too Jesus manages all of the principalities.

So in this sense there is a broad literary parallel and a similar usage of an important common word. However, coincidence does not prove causality and beyond their similarity of theme there is no way to establish any borrowing.

"Hold together", which is what most English translations have for συνίστημι, is, I believe, misleading. Given the context and the aktionsart (even though it is a stative verb) I'm inclined to see it as "...and by him all things have been [re-]organized" (referring in the context to the thrones, dominions, principalities and authorities of the new regime).

A. transitive, act., pass., and mid. ① to bring together by gathering, unite, collect pass. of the water of the boundless sea συσταθὲν εἰς τὰς συναγωγάς collected in its gathering-places 1 Cl 20:6.

Here is the passage that BDAG mentions in context from 1 Clement (which probably is an allusion to Sirach, or the other way around):

1 Clem. 20:5 Moreover, the inscrutable depths of the abysses and the unutterable statutes of the nether regions are constrained by the same ordinances. 1 Clem. 20:6 The basin of the boundless sea, gathered together by His workmanship into it's reservoirs, passeth not the barriers wherewith it is surrounded; but even as He ordered it, so it doeth. 1 Clem. 20:7 For He said, So far shalt thou come, and thy waves shall be broken within thee. 1 Clem. 20:8 The ocean which is impassable for men, and the worlds beyond it, are directed by the same ordinances of the Master. 1 Clem. 20:9 The seasons of spring and summer and autumn and winter give way in succession one to another in peace. 1 Clem. 20:10 The winds in their several quarters at their proper season fulfill their ministry without disturbance; and the ever flowing fountains, created for enjoyment and health, without fail give their breasts which sustain the life for men. Yea, the smallest of living things come together in concord and peace. 1 Clem. 20:11 All these things the great Creator and Master of the universe ordered to be in peace and concord, doing good unto all things, but far beyond the rest unto us who have taken refuge in His compassionate mercies through our Lord Jesus Christ, 1 Clem. 20:12 to whom be the glory and the majesty for ever and ever. Amen.

Rather than "held together" I would say "brought together under control".

I have always found Col 1:17 rather enigmatic. When I was pondering Sirac I was struck by the similarity of these passages and even blogged about Sirac possibly being the background of Col 1:17. However as I reconsider it I realize that "hold together", which is what most English translations have, is misleading since the word is in the perfect, not the present. "Hold together" suggests an ongoing maintenance which is not compatible with the perfect. Given the context and the "aktionsart" I'm inclined to see it as "...and by him all things have been established" (referring in the context to the thrones, dominions, principalities and authorities of the new regime).

Not the answer you're looking for? Browse other questions tagged colossians sirach apocrypha or ask your own question.