In Psalm 68:4 and Psalm 135:1 how are contractions formed in Hebrew and how does YHWH become Yah?

Praise Yah!
Praise the name of YHWH!
Praise him, you servants of YHWH,

Brown-Driver-Briggs says Yah is a contracted form of YHWH bearing all the full meaning of YHWH, but it does not delineate how this process occurs. The same source indicates that this is a poetic form used in song. A glance at the references to the 48 passages in which it occurs affirms this.

When we say "don't" is a contraction of "do not", we know that the "o" of "not" is dropped. What is the grammatical/linguistic process of Hebrew contractions and how specifically does YHWH contract to Yah?

Gesenius lexicon for Strong's 3050 has a slightly expanded explanation. There either יַהֲַוֹה or יַהְַוֶה is allowed to be an earlier pronounciation of YHWH, and the form Yah is explained by apocope to יָהוּ and then by omission of the unaccented וּ to the final יָהּ. As a further evidence, Gesenius points that "these forms are used promiscuously" (sic) at the end of proper names.

Nehemia Gordon proposes this theory to account for Yah, while disagreeing with the scholarly consensus regarding the pronunciation Yahweh.

He states that in ancient Hebrew, contractions were commonly formed by taking the first and final letters. Unfortunately he does not provide any more examples.

In Reading and Writing in the Time of Jesus, Alan Millard states (p. 71):

... Contractions of proper names to their first and last letters do stand on Phoenecian and Palestinian coins of the Hellenistic period and in graffiti from the Punic towns of North Africa.

Contractions formed from the first and final letters is common in early Greek Christian manuscripts, for example:

Accordingly, Millard suggests that Christian scribes might have borrowed this from "Semitic habit".

Because it occurs in isolation as יָהּ, pronounced /yah/, we know the partial pronunciation of the Tetragrammaton יהוה.

The following image shows four theophoric names, all composed of the theophoric element יָהּ either preceded or followed by the same verb חנן (“he is gracious”). Thus, all the names share the same meaning: “Yah is gracious.” The image demonstrates how the vowel pointing in the theophoric name יָהּ changes depending on its position in the word (relative to the verb). 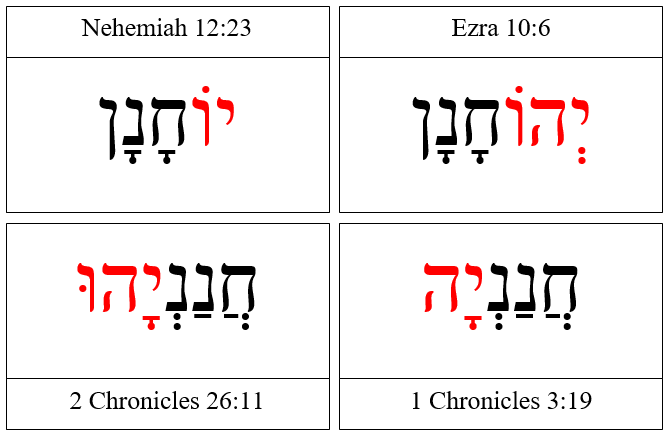 Theophoric element occurs in the beginning of the theophoric name

Theophoric element occurs at the end of the theophoric name

While all these names are recognized as theophoric, the different sounds of the theophoric element in each (i.e., /yah/ v. /yeh/) cause confusion for some concerning the pronunciation of the Tetragrammaton.

The pronunciation of the tetragrammaton as “Jehovah” is an absurdity. The earliest appearance of this transliteration we find in two passages of the “Pugio Fidei,” 1278, though it is not improbable that this is due to a later copyist. We know for certain, however, that this misnomer was brought into prominence by Petrus Galatinus, confessor of Leo X. The discontinuation of the pronunciation of the tetragrammaton by the Jews is doubtless due to a misinterpretation of Lev. 24:11, 16, in consequence of which the name was considered too sacred to be pronounced.

The pronunciation “Jehovah/Yehovah” was caused by the Masoretes inserting the vowel pointing for אֲדֹנָי (“Lord”) under the Tetragrammaton יהוה.

The name Jehovah is a hybrid proper name that combines the consonants of YHWH with the vowels of Adonai. The Masoretes, Jewish scholars from the early Middle Ages who established the basic text for the Hebrew Bible and standardized its pronunciation, inserted the vowels of Adonai into the Tetragrammaton. They did this to remind readers to avoid saying the sacred name Yahweh and to substitute instead the name Adonai. In the late Middle Ages, and especially at the time of the Reformation, a Christian misunderstanding of the (vocalized) Masoretic text resulted in the expression Jehovah finding its way into common Christian usage.

This tradition of reciting אֲדֹנָי for יהוה predates the Masoretes by centuries. This explains why the Jewish scribes who produced the Septugaint wrote the word κύριος (equivalent to אֲדֹנָי) for occurrences of יהוה, rather than simply transliterating the Tetragrammaton into Greek.

For example, instead of a name such as דָּוִד (“David”) being pronounced /daˈvid/, it would have been pronounced /daːˈwiːð/. If we were to transliterate these into English, the former (modern Hebrew) would be “David,” while the latter (biblical Hebrew) would be “Dawid.” That being said, it is the accepted standard to transliterate the Hebrew letter ו into English by the letter “v” regardless of it being used in a biblical or modern Hebrew context. It is left up to the reader to pronounce it as /v/ or /w/ depending on the context.

Thus, “Yahweh” may also be written as “Yahveh” with the understanding that the letter “v” in the latter should be pronounced as /w/ rather than /v/ to reflect the biblical Hebrew pronunciation.

To account for the change in pronunciation of the theophoric element from /yah(u)/ to /yeh(o)/ is the grammatical phenomenon known as “propretonic reduction,” or simply, vowel reduction. 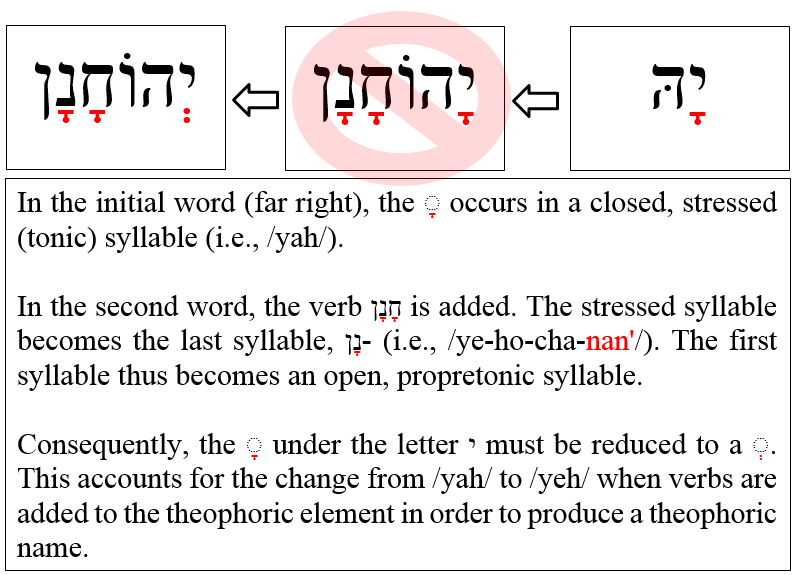 Spoer, Hans H. The Origin and Interpretation of the Tetragrammaton. Chicago: U of Chicago P, 1899.

I'm being quite conservative here with the amount of names I'm jotting down. I thought about 10 for each pronunciation would be more than what's needed to make the point.

Looking at the language patterns above, YaHWeH or YaHUaH don't really make as much sense as YeHoVaH. Is there solid evidence that YaHWeH can be proven as THE pronunciation of the Name?

The question forces an answer that יה must be a contraction יהוה. Perhaps it is not.

In forty eight times יה is used in scripture, It appears twice with יהוה as יה יהוה . Isa 12:2 and Isa 26:4. And it is translate LORD JEHOVAH.

In extra-biblical writings It is also used. If it was a 'nickname' for Jehovah, as is suggested by the contraction theory, what would motivate the author to write the equivalent of Bob Robert.

The usage of יה יהוה supports the ancient practice of Notarikon as defind in the Sefir Yetsirah. The Sephir Yetzirah is either an old book or an ancient book (debated) which is used as the core of Caballah, however, when read plainly, it is a phonetics book which describes the formation of letters from sounds and words from letters.

It assigns meaning to the letters and suggests that words are built by combining the meaning of the letters.

Air emanated from the spirit by which He formed and established twenty-two consonants, stamina. Three of them, however, are fundamental letters, or mothers, seven double and twelve simple consonants; hence the spirit is the first one.

For He indeed showed the mode of combination of the letters, each with each, Aleph with all, and all with Aleph. Thus in combining all together in pairs are produced these two hundred and thirty-one gates of knowledge. And from Nothingness did He make something, and all forms of speech and every created thing, and from the empty void He made the solid earth, and from the non-existent He brought forth Life.

The meanings it assigns to letters and the philosophy around the phonetics may or may not be valuable, but the old or ancient source on the formation of language is of great interest, as is the memory that the meaning of words are formed by combining the meaning of letters.

This property of Hebrew can be observed easily in the example of Adam אדם who came from the ground 'adamah' אדמה and was made of blood 'dam' דם and spirit 'ah' א.

Yah is more likely to be one of the legitimate names of God in it's own right. It expresses the idea of the ineffable creator ['Creator י not understood ה '], where Yahweh is both 'I AM' and 'The creator י of calamity הוה' . Also Yahweh can be formed as The ineffable God 'Yah יה of wo הו or י(הו)ה.

In Genesis 6:3 God tells Moses that he has not been known by the name Yahweh previously, though Abraham knew him by that name. This is not a contradiction. Abraham knew God as 'I AM'. God explained to Moses that, as he is about to wreak havoc on Egypt, he has not previously been known as the 'Creator י of calamity הוה.

Isa 45:7 I form the light, and create darkness: I make peace, and create evil [calamity]: I the LORD do all these [things].

15
The name of God in ancient manuscripts
5
Are the divine name and its contracted form somehow unique or are they truly inter-changeable?

0
Why does the Hebrew word "chesed" in Psalm 136 have two meanings?
6
Why are the words "darkness" and "light" in their feminine form in Psalm 139:12?
5
Are the divine name and its contracted form somehow unique or are they truly inter-changeable?
15
The name of God in ancient manuscripts
8
How do sins become strangers in Greek Psalm 18 (19)?
1
How is "wicked" and "wickedness" differentiated in Psalm 37:20
8
In Psalm 82:1 who are in the "congregation" and who are the "gods"?
5
Biblical Hebrew, לו and Gender Agreement (Psalm 3:2)
3
Is the Holy Spirit called YHWH and worshiped in Psalm 95 and Hebrews 3:7?
8
How should the Hebrew ‘ehyeh asher ehyeh’ in Exodus 3:14 be translated in English and what does it mean?