Does the acrostic structure of Lamentations indicate a composition from 5 separate psalms?

It's not noticeable in many English translations, but Lamentations makes heavy use of the acrostic technique of Hebrew poetry. As a note in the NET Bible mentions:

One clue that there may be multiple authors is that the gender and situation of the first-person witness changes: the narration is feminine in the first and second lamentation, and masculine in the third, while the fourth and fifth are eyewitness reports of Jerusalem's destruction.

Finally, in an article titled "Lamentations: The Fall of Jerusalem", Donald E. Curtis points out that each chapter uses a slightly different variation of the acrostic structure. He interprets that as a literary device:

In literary terms, I believe the author of Lamentations invokes this structure to emulate the cycle of tears during a time of mourning. In the collapse of the acrostic pattern, there is a loss of control.

But I can see an equally compelling argument that the variations are a result of separate compositions authored at different times.

Ignoring for the moment the authorship question, does the internal evidence suggest that the chapters of Lamentations began, like the chapters of Psalms, as separate written works that were later composed into a single document?

Summary
In his introduction to Lamentations, Daniel Grossberg has this to say about authorship:

Ancient tradition, reflected in the Talmud, the Septuagint, and the Vulgate, ascribes authorship of the book to Jeremiah, the leading prophet at the time of the destruction, whose book bears a resemblance to the language of Lamentations. Modern scholars do not accept the notion of Jeremian authorship (as they do not accept the ancient ascription of other biblical books to biblical figures). They ascribe each chapter to a different anonymous author, whose identity is impossible to ascertain.1

While five separate authors would fit the idea Lamentations was originally five separate psalms complied into one, I believe all of the literary devices used create a unified structure which is best explained as the work of a single writer: Jeremiah.

The first four chapters are structured as alphabetic acrostics, with each verse beginning with a letter of the Hebrew alphabet in sequence. Ch 3 is a triple acrostic. (The sequence in chs 2-4 reverses the order of the letters "pe" and "ayin"; this reflects an alternative order of the alphabet found on inscriptions from Izbet Sartah and Kuntillet Ajrud.)...The verses in chs 1 and 2 are relatively long, with three "poetic lines" in each. Ch 3 is composed of short verses, three for each letter of the alphabet, with each verse falling into two parts. Ch 4 returns to the use of longer verses, but with two "lines" in each instead of three. Ch 5, although not an acrostic, has twenty-two single-line stanzas. (Twenty-two is the number of letters in the alphabet, so the last poem has the same number of verses as Chs 1, 2, and 4.)2

As the alphabetic sequence of Pe-Ayin is considered older, this abecedarium could be used to date chapters 2, 3, and 4 to earlier writers; it also creates three primary divisions within the work: 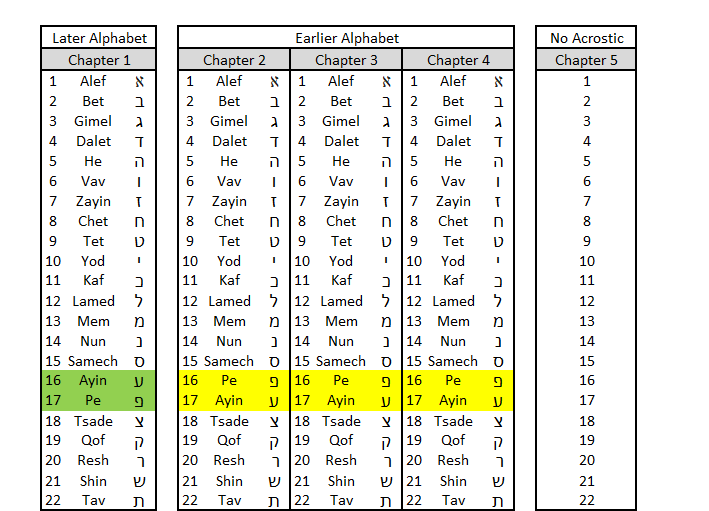 Of course a writer like Jeremiah would likely be aware of the earlier sequence and simply chosen to use both. For example, since Chapter 1 describes the condition of Jerusalem and Judah after the destruction, it is chronologically "out of order" from Chapter 2. In other words, the use of the historical abecedarium is patterned after the chronology used to describe the events:

Chapters 4 and 5 exhibit a similar treatment except the order is reversed:

The three acrostics with the earlier Pe-Ayin alphabet sequence are used in those chapters which describe earlier events than those in Chapters 1 and 5; this suggests a single writer whose purpose(s) in using different acrostics included what could be called a "real-time" element to the structure. Rather than construct a chronically correct sequence, the writer chose to begin in the final devastation and reflect on the past before ending by returning to the present. Their use of different alphabetic sequences is a way of authentication: they are lamenting what they experienced.

The Secondary Acrostic
Chapter 5 lacks a full 22 letter acrostic, yet as Homer Heater Jr, notes, there is a four-letter acrostic:

verses 19-20 are themselves a mini-acrostic used to express the highest praise for Yahweh [YHVH] in the book followed by a tentative, but hopeful cry for help

Yahweh [YHVH] is sovereign!
A — Thou, O LORD, dost rule for ever;
K — Thy throne is from generation to generation.
But O LORD do not abandon us!!
L — Why dost thou forget us forever;
Z(sic) — Why dost Thou forsake us so long?3

Heater uses letters in English to identify the acrostic. Here it is in Hebrew:

These particular letters and their arrangement are symbolic of the entire alphabet:

The Ending Pe's
As noted in enegue's answer, a Pe is placed at the end of the four alphabetic acrostics:

Chapter 5 comes to a much different ending than the other chapters. So in terms of the overall content of the chapter, the Pe functions to mark the end of the fifth Lament:

Finally, since verse 5:18 begins with the letter Ayin, the Ayin-Pe sequence is used in the final line of the final lament. "Lamentations" as such effectively ends at 5:18. The Book closes with praise to YHVH and a request for restoration. Here is the complete outline the writer used: 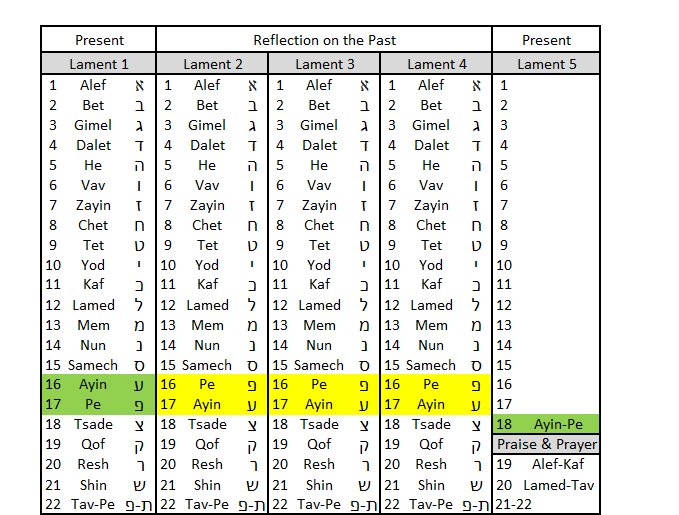 The final arrangement indicates Chapter 3 is the central theme of the Book. In fact, it is here where the first mention of hope is introduced:

The turning point is in the third poem, chap. 3, which presents a change from despair to hope. Verses 22-39 present the conception that God's mercies have not ended (v. 22) and the sufferer must await God's salvation (v. 26). Verse 31 determines that God has not cast off Israel forever; the situation will change. These verses are the turning point, leading from the despair of chaps. 1-2 to hope in chaps. 4-5. Lamentations 3, which is rightly considered by many scholars to be the crux of the book, deals with the theological perspective of the destruction.4

With this in view, here is a brief summary of the five chapters:5

Number of Lines and Gender
Unlike some acrostic Psalms, each in Lamentations is "complete" with 22 letters. Therefore each chapter, including the one without an acrostic has 22 stanzas. The number of lines appears to be an integral element to the structure. Chapters 1, 2, and 3 have 66 lines, three per stanza. Chapter 4 has 44 lines, two per stanza. Chapter 5 has 22 lines, one per stanza.

As noted in the question, the primary gender of a chapter varies. Chapters 1 and 2 are feminine; chapter 3 is masculine; chapters 4 and 5 are a "collective" witness. Here is a summary of all the literary structural features for all chapters:

The varied use of gender, like the triple acrostic, highlights Chapter 3.

While Chapter 4 is shorter than Chapters 1, 2, and 3, it combines with Chapter 5 to total 66 lines. This suggests Chapters 4 and 5 were written with this element in mind. That is to say, just as a "collective" gender would include both male and female, the 2 collective gender chapters combine to 66 lines. This "2 in 1" relationship implied in the gender of chapters 4 and 5, parallels in the number of lines and the number of acrostic letters in the entire work:

Two Groups of Seventy
Within the entire work, there are five acrostics, three composed of 22 lines which start with a acrostic letter, one with 66 lines, and one with 4 lines:

The 4 line acrostic in Chapter 5 when considered with the 66 lines of the triple acrostic, total 70. Similarly when considered with the supporting chapters, the total is 70. Thus, the 4 letter acrostic at the end of the work can be taken as a fitting ending to both the central message of Chapter 3 and the combined supporting messages of Chapters 1, 2, and 4. This is another "2 in 1" aspect which can be found in the entire work.

Seventy is particularly significant at this moment in history because it is the number of years Jeremiah twice prophesied the exile would last:

“For thus says the LORD: When seventy years are completed for Babylon, I will visit you, and I will fulfill to you my promise and bring you back to this place. (Jeremiah 29:10)

Therefore, Lamentations not only reflects a variety of structural elements integrated into a whole, the whole may be seen as producing two allusions to Jeremiah's 70-year prophesies. The most reasonable explanation is Lamentations is the work of a single person writing soon after the destruction of Jerusalem; that person at a minimum would be contemporary to Jeremiah.

If this is so the lone masculine poem is likely Jeremiah's personal lament:

I am the man who has seen affliction... (Lamentations 3:1)

The triple acrostic corresponds to the three-fold nature of Jeremiah's suffering:

Similarly, if the writer is Jeremiah, three elements of time would apply: Jeremiah prophesied before the destruction; he experienced events and now he is lamenting. This is another explanation for the triple acrostic.

Conclusion
It is unlikely an editor could find 5 different psalms each with all the proper features which could then be complied into a single Book. Rather, the most likely explanation for the unity of the structural elements is they are the work of a single writer. Since the structure also indicates a writer who was contemporary to the events, the most likely person is Jeremiah, as every ancient source holds.

The two images below are screen shots of the WLC text available at The Unbound Bible site, and the conclusions drawn are based on the evidence available to me.

The image above is a snapshot of the cross over from chapter 2 to 3 so it can be seen that the use of samekhs in chapter 3 is no different from that in chapter 2, which is the same as chapters 1 & 4. There are 22 samekhs in each Lamentation, and each lamentation concludes with a pe

The image below is a snapshot of Lamentations chapter 5. As you can see, there are no samekhs, and there is what would seem to be, a misplaced pe (considering the structure established by the other chapters) at the end of verse 18.

Even without consideration of the content of the Lamentations:

Not the answer you're looking for? Browse other questions tagged source-criticism five-scrolls lamentations poetry or ask your own question.

3
Why does Jesus include “persecutions” in the list of things received by his followers?
11
Does the Shibboleth story help us date the book of Judges?
6
Does archaeological evidence contradict the Documentary Hypothesis?
11
What signs does Q show of stages of composition?
9
What does the “splendour of Israel” has been hurled down to earth mean?
8
Does the narrator share Naomi's viewpoint in Ruth 1:20-21?
0
Does Genesis 2:4 to Genesis 3:24 Describe Events Which Took Place on the Same Day?
2
In Lamentations 2:8 what does it mean that the LORD has “stretched out a line”?