How did Haman intend to kill Mordecai?

Esther 5:14 Haman’s wife Zeresh and all his friends said to him, "Have a gallows seventy-five feet high built, and in the morning tell the king that Mordecai should be hanged on it. Then go with the king to the banquet contented." [NET Bible]

The Hebrew word translated as "gallows" is the Hebrew עץ ('etz) which means at its base simply "tree" or "wood." Strong's shows it is translated in the KJV as:

Other translations show variation in their understanding of the instrument Haman intended to use.

Coming from 'etz, it would obviously be made of wood. What was it, precisely? How definite can we be of the identification?

[Sidenote: I originally intended to ask about the size of the instrument of death, but found nothing mentioning a text critical issue on the height. So I refocused to the identification as described above.]

My understanding is that death by "hanging" on a "gallows" (implying by noose around the neck) is not a form of capital punishment known in the ancient Near East.1 On the other hand, impalement as exposure of corpse is very well known -- as the grisly detail from the Nineveh palace relief of the siege of Lachish unfortunately demonstrates (middle at left edge):2 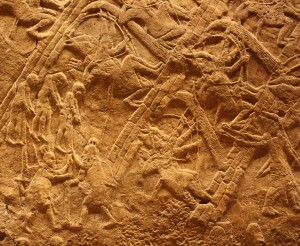 It is sometimes thought that the size of the ʿēṣ militates against impalement and requires a "gallows" -- this was Paton's argument, at any rate.3

It has been thought that at fifty cubits, or about eighty feet, the structure that Haman is advised to erect in 5:14 is too large to be a stake, which would come from a single tree, and must thus be a gallows instead. This may be, but given the tendency of the book to gross exaggeration (e.g., the 127 provinces [1:1], the 180-day party [1:4], and the twelve months of cosmetic work [2:12]), such realism is out of order. That the action in question was to be performed on Haman's ten sons after they had been killed (9:6-10, 13) strongly argues for impalement on stakes rather than hanging on gallows. The point of impalement is not punishment, but exposure to disgrace. Simply killing Mordecai would not assuage what feels like an enormous injury to Haman, with his fragile ego. Only an enormous visible disgrace of Mordecai will bring him satisfaction.

One might add by way of corroboration, that the "baker" in the Joseph story suffers a similar fate -- (√tlh on an ʿēṣ) -- but after being (apparently) beheaded (Genesis 40:19, 22).

For these reasons, I think the "impaling/stake" interpretation is to be preferred over the "hanging/gallows" understanding.

It is a gallows. The Book of Esther confirms this at 7:10 where it says:

And they hanged Haman on the gallows that he had prepared for Mordecai, and the king's anger abated. (JPS translation.)

The root of the word יִּתְלוּ is לתלות which means "to hang." Also, I'm pretty certain that if the text even implied "impaled" that the rabbinic discussion of the text in the Talmud tractate of Megillah would have been all over that, just as they discuss many interpretations of other terms never considered in Christian texts.

Jewish Midrashic texts make it clear that the rabbis understood only that Mordechai was hung from a gallows. For example, Midrashic literature discusses Zeresh's recommendation to hang Mordechai as the best choice of execution for Haman. Mindy Kaminker writes:

The sources describe Zeresh as a very wise woman who even knew the secrets of sorcery.7 According to the Midrash, Haman had 365 advisors, but Zeresh’s advice was the best he received. She found an original way to kill Mordechai, one that had never been tried, telling her husband: "You must remember that Mordechai is a Jew. If you try to kill him with a sword, know that Pharaoh attempted to decapitate Moses and failed. If you wish to stone him, remember how David slew Goliath with stones. If you try to drown him, remember how G‑d tore the sea before Israel. If you want to exile him to the desert, remember how Israel wandered in the desert for forty years and thrived. Joseph was released from jail and became the viceroy. Chananya, Mishael and Azarya went out from a fiery furnace, and Daniel left the lion’s den. Don’t try to blind him; remember how many people Samson killed whilst sightless. There is one remaining way for you: hang Mordechai on a tree" [citing Esther Rabbah 9, Yalkut Shimoni 6:10057].

According to the midrashic source, Agadat Eshter 5:14, Zeresh went with Haman to pick out a pole or tree from which to hang Mordechai. The pole they chose was a relic from Noah's Ark, according to the Yalkut Shimoni (Esther 6:1056).

Not only does Jewish tradition accept that Haman was hung by his neck, it is exremely unlikely that the authors of the Book of Esther, the Sages of the Great Assembly, which included Mordechai, Ezra, Daniel, Nehemiah and Zechariah (see Babyl. Talmud, Bava Basra 15a), would have used the word לִדְקוֹר (to impale), especially since that is the word used at Numbers 25:8 to describe what Phinehas (Pinchas) did with his spear to the copulating Baal Pe'or priestess and Zimri ben Salu (done in such a way as to preserve the evidence that the two were copulating at the time of death -- for explicit details see Bably. Talmud, Sanhedred 82b). Because the Sages of the Great Assembly were not ones to use a vague word when an explicit word would do, I can find no reason to believe that Haman was impaled.

Not the answer you're looking for? Browse other questions tagged esther five-scrolls or ask your own question.

7
Why did Haman build so tall an instrument of death?

8
Did King Achashverosh (or his court) know that Mordechai was Esther's relative?
9
Was Haman an Agagite?
7
Why did Haman build so tall an instrument of death?
8
How can Ruth "return" to a place she had never been?
10
How did Ecclesiastes come to be associated with Sukkot?
3
In Esther 3:2-4 why did Mordecai refuse to obey?
0
Why was Haman desperately seeking to wipe out the children of Israel?
1
How many hours Esther already fast at the time she go to the palace?
1
Why didn't Haman investigate Mordecai's relationship with Queen Esther?
4
Why did Mordecai forbid Esther to reveal her nationality?