Does Titus 2:13 refer to one person or two? [duplicate]

In the second coming of Our God, are there two persons who will appear in the clouds?

Looking for that blessed hope, and the glorious appearing of the great God and our Saviour Jesus Christ.

The Syriac Vulgate of the New Testament (Peshitta) appeared before the Fourth Century, and appears to shed some light that "the savior Jesus Christ" and "the great God" were appositive phrases.

The verse appears as follows:

The word for "glory" (highlighted in yellow above) possesses the third person singular suffix. We can compare with Kiraz (2003) as follows: 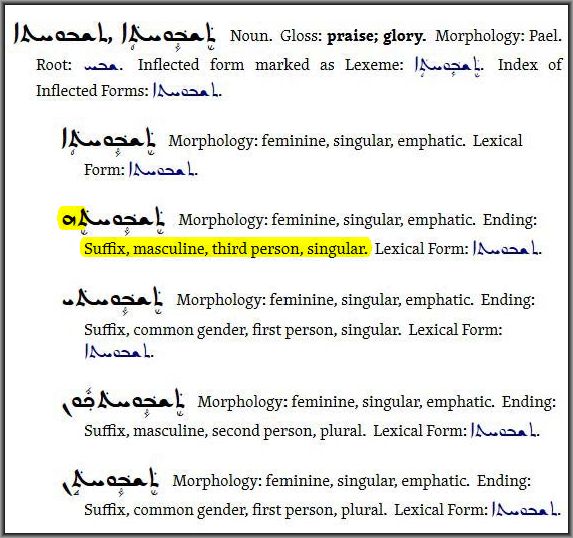 The words that follow the word for "glory" are all emphatic, which means they are definite. The words "Jesus Christ" are modified by the adjective for savior, which is emphatic.

In other words, all the nouns/adjectives following the word for "glory" are in the emphatic case; the masculine singular suffix to the noun for "glory" is in the third person masculine singular (and thus referring to the "glory" of one particular person); and finally, the phrase "and of our savior Jesus Christ" does not possess the indicator for the genitive case (ܕ), which suggests it is an appositive for the phrase immediately preceding, which is "of the great God."

In summary, the grammatical structure of this verse in the Peshitta suggests that the Syriac writers during the Fourth Century (or earlier) had taken the phrase "and of our savior Jesus Christ" in this verse to be an appositive for the phrase "of the great God."

The content/context of this text/letter should be what is used to inform how it should be interpreted--not modern Oneness/Unitarian/Trinitarian doctrines in the Christian Church.

Answer: This text absolutely indicates two personas--substantiated by the fact that Paul is explicit about the two identities mentioned earlier in the text.

Paul is very unambiguous, by using the term "Father." ---

Titus 1:4, NASB - To Titus, my true child in a common faith: Grace and peace from God the Father and Christ Jesus our Savior.

Titus 2:13, NASB - looking for the blessed hope and the appearing of the glory of our great God and Savior, Christ Jesus,

It stands to reason, that the only reasonable interpretation is to affirm that Paul wasn't contradicting himself in the letter.

Not the answer you're looking for? Browse other questions tagged titus or ask your own question.

20
Does Granville Sharp's Rule indicate that “God” and “Savior” share a referent in Titus 2:13 and 2 Peter 1:1?
9
What are the earliest dated Syriac manuscripts of the Bible?

20
Does Granville Sharp's Rule indicate that “God” and “Savior” share a referent in Titus 2:13 and 2 Peter 1:1?
6
How would one normally phrase “Our God and Savior Jesus Christ” in Koine Greek to refer to one person and two persons?
3
Where should the pronoun ἡμῶν (our) be placed in Titus 2:13?
7
Does μεγάλου θεοῦ, great God, in Titus come from Isaiah 9:6?
5
Is the letter to Titus a more relevant source of John's "the Word," ὁ λόγος, than Philo, Hellenistic philosophy, or Jewish Wisdom literature?
3
Assuming Paul intended Titus 2:13 to mean two different referents, what advantage does his choice of words have over others which are unambiguous?
8
Who is our Savior: God or Jesus?
3
Did Paul treat God and Jesus as one person in Titus 2:13?