Does the "lost leaf" theory for Mark's abrupt ending fail if written on a scroll?

I really like this explanation of Mark's rather abrupt ending:

There are three possible explanations for Mark ending at 16:8: (1) The author intentionally ended the Gospel here in an open-ended fashion; (2) the Gospel was never finished; or (3) the last leaf of the ms was lost prior to copying. This first explanation is the most likely due to several factors, including (a) the probability that the Gospel was originally written on a scroll rather than a codex (only on a codex would the last leaf get lost prior to copying); (b) the unlikelihood of the ms not being completed; and (c) the literary power of ending the Gospel so abruptly that the readers are now drawn into the story itself. E. Best aptly states, “It is in keeping with other parts of his Gospel that Mark should not give an explicit account of a conclusion where this is already well known to his readers” (Mark, 73; note also his discussion of the ending of this Gospel on 132 and elsewhere). The readers must now ask themselves, “What will I do with Jesus? If I do not accept him in his suffering, I will not see him in his glory.”—NET Bible note

I've bolded the phrase that prompts my question: Couldn't the final portion of original manuscript be lost if it were in scroll form?

For reference, this is what a scroll of the era looked like: 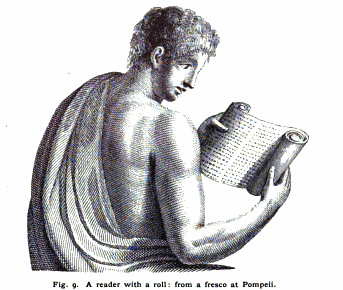 While it might be less likely to lose just the final column or two from a scroll than the final leaf or two from a codex, it doesn't seem like we can totally eliminate the possibility.

Ben Witherington suggests that the final few lines of the Mark autograph1 were worn away thusly: 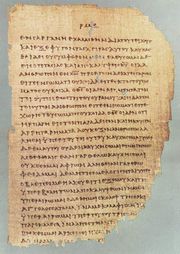 If the Mark scroll were rolled with the beginning on the inside and the end was usually exposed, it's possible a portion of the papyrus and the ending would be lost. Rather than losing an entire column, only a few verses would be missing. Dr. Witherington suggests the ending was available to Matthew and postulates:

And behold, Jesus met them and said, “Greetings!” And they came up and took hold of his feet and worshiped him. Then Jesus said to them, “Do not be afraid; go and tell my brothers to go to Galilee, and there they will see me.”—Matthew 28:9-10 (ESV)

What makes this passage so interesting is that Matthew was quoting the final lines of Mark at this point2:

And he said to them, “Do not be alarmed. You seek Jesus of Nazareth, who was crucified. He has risen; he is not here. See the place where they laid him. But go, tell his disciples and Peter that he is going before you to Galilee. There you will see him, just as he told you.” And they went out and fled from the tomb, for trembling and astonishment had seized them, and they said nothing to anyone, for they were afraid. (Mark 16:6-8 ESV)

But the angel said to the women, “Do not be afraid, for I know that you seek Jesus who was crucified. He is not here, for he has risen, as he said. Come, see the place where he lay. Then go quickly and tell his disciples that he has risen from the dead, and behold, he is going before you to Galilee; there you will see him. See, I have told you.” So they departed quickly from the tomb with fear and great joy, and ran to tell his disciples.—Matthew 28:5-8 (ESV)

Then, after Matthew used the Mark autograph as a source but before it was copied verbatim, the ending was lost. Luke tells a slightly different Easter story. Later, when 4th century scribes noticed that Mark ended awkwardly, they "reconstructed" Mark 16:9ff from resurrection appearances in Luke and some details from the Acts of the Apostles. Later scribes who had access to copies either with or without the "long ending" naturally chose the more satisfying conclusion.

Having summarized the "wear and tear" theory, I need to mention a few points against it:

There are any number of dangers an ancient manuscript might suffer to cause Mark's original ending to be lost. But the story is a bit more complicated in the case of a scroll format that Mark originally must have circulated in as compared to the codex format.

1. Or just the "master copy" to which all manuscripts of Mark must trace their ancestory.

3. The idea paints a very interesting story of the author of Matthew obtaining Mark and instead of making a verbatim copy, going over it to augment and correct the first draft of the gospel. Then, since the first draft was not destroyed, both versions eventually saw circulation. That would fit well with the concept that the early fathers had that Mark was later than Matthew, since from their perspective it popped up later.

4. I subscribe to the logic of the NET Bible footnote on the end of Mark.

No Failure of Theory Simply for Being on a Scroll

Examine carefully the Isaiah scroll. About every three to four columns there is stitching of the pieces of parchment together. Codices are thus not the only documents with "leafs" (so to speak). It is possible for a section of a scroll to have separated at such a stitch point.

The end of a scroll may have been "lost" by other means:

There is no force to an argument against the longer ending of Mark as original based off the fact that the original and early copies were written on scrolls. There are plenty of explanations how an end of a early scroll could be missing and thus become the "source" vorlage of later copies such as Sinaiticus, Vaticanus, etc. that are missing it (especially when there are evidences that the copyists of those documents left indications they were expecting a longer ending).

In short, a "lost leaf" (or similar theory) is among one of the possible explanations for the missing text, and being in a scroll does not complicate the issue (especially for one "end" of the document).

If the scroll is rolled so that the outer portion of the scroll contains the final part of the book, then the theory still stands. I emailed my seminary hermeneutics professor this question and he suggested checking Merrill C. Tenney. He also said he thought Tenney said that scrolls were rolled this way.

Not the answer you're looking for? Browse other questions tagged mark history textual-criticism or ask your own question.

10
Why does the Peshitta use the word ‘baptism’ for ‘enlightened’ in Hebrews 6:4?
4
What does Mark's account of the upper room reveal about Judas' part in the new covenant?
9
In Romans 8:28 do "all things work together" or does "God work all things together" for the good?
14
What is the internal evidence that Peter provided source material for Mark's gospel?