Why did the witnesses lay their coats at Paul's feet?

During the stoning of Stephen, according to the book of Acts, "the witnesses laid their coats at the feet of a young man named Saul," who later converted to Christianity and took the name Paul.

Then they dragged him out of the city and began to stone him; and the witnesses laid their coats at the feet of a young man named Saul. While they were stoning Stephen, he prayed, "Lord Jesus, receive my spirit." Then he knelt down and cried out in a loud voice, "Lord, do not hold this sin against them." When he had said this, he died. And Saul approved of their killing him.

What is the significance of this? Was he their servant? Their supervisor? Is this Luke's literary device to introduce someone who will become a major character? Or does the placing of the coats at Paul's feet have some other meaning?

The Greek word translated "coats" in the NRSV is himation <2440>: 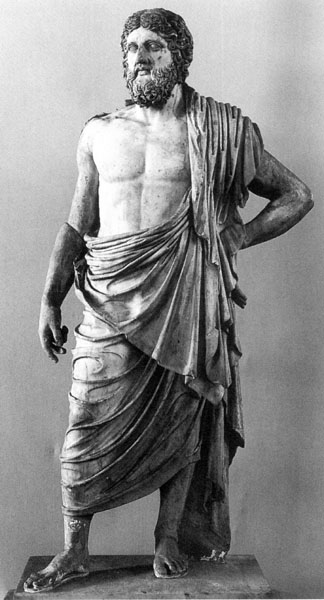 Although the above image shows Zeus naked under his himation, it was more usual for them to be worn over a chiton <5506> or tunic. One common translation of the word is "cloak", which gets across the idea that these are optional outer layers designed more for warmth than for modesty. Jesus mentions both garments in the Sermon on the Mount:

And if anyone would sue you and take your tunic, let him have your cloak as well.—Matthew 5:40 (ESV)

The outer garments would have been heavy and constricting, so it would have been sensible to remove them in order to execute Stephen. These garments would have also been valuable, so it would be important that someone would be assigned the task of protecting them from thieves. An analogous situation, in my mind, is when you dump your sweatshirt on the ground next to a friend when playing a pickup game at a public park. You don't want someone wandering off with your clothes.

Why is this detail included and what is its significance?

Luke patterned his two volume history after ancient Greek history. One of the conventions of the genre at the time was insert details that would give the reader a "slice of life" to give the reader a more full story. It's just a more interesting narrative with the detail than without it.

But this passage is particularly significant as it serves as our introduction to Saul/Paul, who becomes the primary protagonist of Acts. We know two things about Saul from this introduction:

Luke's summary of Saul's character at this time:

And Saul approved of his execution. And there arose on that day a great persecution against the church in Jerusalem, and they were all scattered throughout the regions of Judea and Samaria, except the apostles.—Acts 8:1 (ESV)

This sets us up for the turning point of the early Church: Paul's conversion in Acts 9. The ancients (especially Greeks and Romans) believed strongly that details, such as guarding the persecutor's cloaks, told us much about a person's character. (It's one of the reasons the story about Nero "fiddling" while Rome burned is so important.) In this case, we need to see how Saul was associated with the persecution of the church before he became Paul.

They are stoning him, and as such take him outside the city to a pit. There, they will strip him and hurl rocks on him until he dies. They are to aim for the chest, but precision is impossible.

Under Jewish law,* the criminal was to be stripped (Mishnah Sanhedrin 6:4), but here the executioners strip themselves. The obvious reasons are that it was hot and/or they didn't want to get blood on their clothes (as Affable Geek suggested).

* The citation is from the Talmud but the Mishnah portion. That makes it part of the older tradition that makes up the Talmuds. The Talmuds (Babylonian and Jerusalem) are made up of a shared Mishnah and differing Gemerahs.

But why does Luke mention it? It seems like such a minor detail. He does introduce Paul/Saul here, and by keeping watch on the clothes, we see that Saul is a trusted individual. We also see something else: the accusers are acting decidedly un-Jewish. One of the reasons for the Hasmonean revolt was the influence of Hellenism—Greek living and ways of acting. Greeks exercised naked (that's where the word gymansium comes from, "to exercise naked"). 1 Maccabees begins with a recounting of how far the Jews have already been Hellenized. One of the first in the list is the building of gymnasiums in Jerusalem.

13 and a number of the people eagerly approached the king, who authorised them to practise the gentiles' observances. 14 So they built a gymnasium in Jerusalem, such as the gentiles have, 15 disguised their circumcision, and abandoned the holy covenant, submitting to gentile rule as willing slaves of impiety.

The conflict between Greek Jews and Hebrew Jews appears in other parts of Acts. Most notably, 6:1 and 9:29.

Acts 6:1 Now at this time while the disciples were increasing in number, a complaint arose on the part of the Hellenistic Jews against the native Hebrews, because their widows were being overlooked in the daily serving of food. [NASB]

When the first deacons are selected here in Acts 6, some will note that all seven are listed by their Greek names. This makes perfect sense as it was the Greek-speaking Jewish-Christians who felt they were being left out.

Acts 9:27 But Barnabas took hold of him and brought him to the apostles and described to them how he had seen the Lord on the road, and that He had talked to him, and how at Damascus he had spoken out boldly in the name of Jesus. 28 And he was with them, moving about freely in Jerusalem, speaking out boldly in the name of the Lord. 29 And he was talking and arguing with the Hellenistic Jews; but they were attempting to put him to death. [NASB]

Paul picks up right where Stephen left off, with the same kind of Hellenized Jew, and is met with the same results—they try to stone him.

Luke also has a purpose in his writing to show that Christianity is a branch of Judaism. If he can establish such, Christianity will be seen as a legal religion and not a cult. Showing this through detail instead of simply saying it was first the Greek-speaking Jews who had problems with Christians helps that argument. Legal religions were those which had a long history with the empire and were deemed safe. Judaism and Rome had enjoyed some level of relations since the time of 1 Macc 8:17–32. The times when Jewish and Roman relations would stretch, the revolt of AD 66–73,* the Diaspora Revolt of AD 114, and Bar Cochba's Revolt of AD 132–135 had not yet happened. If Luke could convince his audience that Christianity was connected to and a growth of the old Judaism, Christians would have the same rights and protection under the law as Judaism.

* I date Luke/Acts pre-64, but that would be an answer to a different question.

But I believe Luke has another reason for mentioning it beyond showing the Hellenization of the accusers. He is showing the guilty party. As I said, the law required the criminal to be stripped. Stephen probably was stripped, but Luke doesn't mention it. He mentions the accusers strip themselves in a bit of non-humorous irony—to show who the guilty party really is.

Saul / Paul was indeed a unique and chosen vessel to carry the news of the resurrection of the dead to the powers that controled the civilized world at this crucial point in history.

He was a Roman, trained/taught by Gamaliel and well acquainted with the limitations of the Jews and their ties to the governing authorities. The Jews did not have authority to put a person to death, yet in this instance they took it upon themselves to do so.

Luke's inclusion of this detail actually implicates Paul in the unlawful act of killing a suspected "criminal" without due process, while at the same time exhonerates him as an actual participant. I would suppose as evidence, this testimony would have some damning effect on Paul (at the time Saul), as it's presented in his defense before the Roman court.

I also find this interesting to consider this event as occurring so soon after the cleansing of the temple by Jesus himself and the way he squelched the Sanhedran and Jewish leaders by making them waffle on John the Baptist's identity. John was after all the son of a priest whose birth some 33 years before had to still be well-known.

He too was the victim of an outlandish sequence of events culminating in his demise at the hands of equally out-of-control governing powers.

Not the answer you're looking for? Browse other questions tagged paul history acts or ask your own question.

19
In the time of Jesus, were the Jewish authorities allowed to execute?
5
In Revelation 19:16 was Jesus wearing pants?

19
In the time of Jesus, were the Jewish authorities allowed to execute?
9
How can Paul (Saul), be considered a "young man" when Stephen was stoned?
1
When did Saul/Paul first go to Jerusalem
6
Did Stephen see the Father?
4
What did Stephen mean when he said "Lord Jesus, receive my spirit!" in Acts 7:59?
3
What is the logic behind the Jews' reasoning which led them to spontaneously stone Stephen to death?
1
Was the gift of the Holy Spirit promised only for the first-century Church, according to Acts 2:38-39?
4
If the thief on the cross would join Christ in paradise, would Stephen experience the same in Acts 7:59?
1
If Saul Σαῦλος did hear Stephen’s Speech to Sanhedrin, why was Stephen’s Speech not a Gospel message to Paul Παῦλος based on Galatians 1:11-12?