Why is Pharaoh called, " The Great Dragon" in the book of Ezekiel

In Ezekiel 29-3, God summons Ezekiel to speak these words (KJV),

I am against thee, Pharaoh king of Egypt,

The great dragon that lieth in the midst of his rivers,which hath said,

My river is mine own,and i have made it myself.

What is the background (root),as to why Pharaoh is referred to as "The great dragon"?

Here are the key lines of Ezekiel 29:3 in Hebrew:

Textual note : the Masoretic Text has hattannîm (hat + tannim) here, the plural of "jackals", universally recognized (see, e.g., Rashi on this verse) to be in error (or a bi-form) for hattannîn, the singular for "sea serpent" or the like. The same mistake is found in Ezekiel 32:2. The rest of this answer will be about tannîn.

The Hebrew tannîn is used of some kind of serpent, but typically one found in the water, so a "sea monster" or the like. Here is the entry for the Brown-Driver-Briggs lexicon: 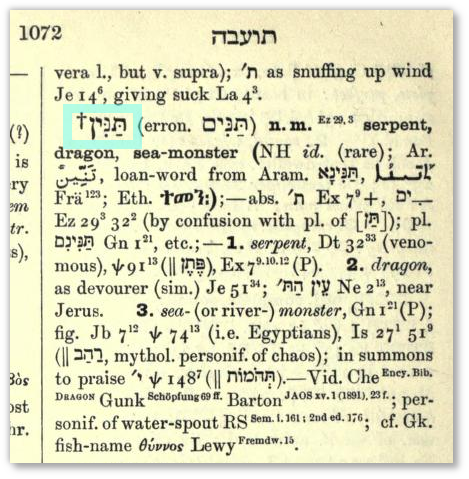 In several of these references (see entry # 3 in BDB), these are associated with a cosmic power, hostile to YHWH. Given the association of Pharaoh, king of Egypt, with the Nile, the resonance was strong enough to link this "sea monster" with Pharaoh (see especially as "crocodile", in a more natural sense). It is, then, simply an evocative "mythical metaphor" associated the king of Egypt with this mythical creature.

As Dɑvïd's answer notes, this might be more accurately translated as "sea serpent". With this in mind several interesting features of Egyptology emerge. Firstly, it should be noted that the serpent or Uraeus was, according to wikipedia,

used as a symbol of sovereignty, royalty, deity and divine authority in ancient Egypt.

Wikipedia also goes on to note,

the pharaohs were seen as a manifestation of the sun god Ra, and so it also was believed that the Uraeus protected them by spitting fire on their enemies from the fiery eye of the goddess. In some mythological works, the eyes of Ra are said to be uraei.

It is therefore interesting to note that Ezekiel is specifically addressing Pharaoh Apries (in Greek) or Pharaoh-Hophra (Egyptian) who is typically depicted as wearing a crown or headdress - though this was a rather common crown for Egyptian Pharoas with Pharaoh Amasis, Amenhotep II and probably several others wearing a snake on their crowns.

Typically, however, the Uraeus was not directly associated with water. This makes this reference interesting as it might be seen and pejorative and antagonistic towards Pharoah. This may be implying that instead of the Pharaoh's chosen mascot representing royalty it instead represents the evil associated with the evil god of the underworld Apep.

I know that mountain of Bakhu upon which sky leans. ... On the east of that mountain is a serpent, 30 cubits in his length, with three cubits of his forefront being of flint. I know the name of that serpent who is on the mountain. His name is "He overthrows". Now at the time of evening he turns his eye over against Re, and there occurs a halting among the (solar) crew, a great astonishment(?) within the voyage, so that Seth bends himself against him.

With wikipedia's note that "In some mythological works, the eyes of Ra are said to be uraei" it is important to point out that According to the Coffin Texts and the Bremner-Rhind papyrus, Ra's Sole Eye returned from searching for shu and tefnut to find that it had been replaced in its' absence. It became upset and turned into Apep in the "Book of Knowing the Evolutions of Ra, and of Overthrowing Apep"

Not the answer you're looking for? Browse other questions tagged ezekiel history or ask your own question.

11
Why was crocodile (תנין) from Exodus 7:10 translated as snake or serpent?