What is the valley of the shadow of death?

Psalm 23 says "yea though I walk through the valley of the shadow of death I will fear no evil" (ESV, NIV). What is that? Is it a real place or a metaphor? If it's a metaphor, how should we understand it? It's a place of evil to be feared, is that an enemy kingdom, hell, spiritual weakness, or what? Is the "valley" significant? The "shadow"? (It doesn't say "valley of death".)

I was going to ask about the rod and staff too, but I found a question about that already. Thanks guys.

My sense is that the answer is "Yes" -- it's a metaphor for a "real place", whatever that "place" might be.

Psalm 23 has a series of shifting metaphors, but in the opening verses the governing concept is that of the LORD as "shepherd", so that the "green pastures", "still waters", and "right paths" of vv. 2-3 are all metaphorical places, of nourishing, of refreshing, of ethical goodness, within that broad conceptual framework in which the psalmist experiences the Lord's care as a sheep experiences the care of the shepherd.

The "valley of the shadow of death" in v. 4 participates in the development of this metaphorical movement. The relevant bit of the verse reads this way:

Here, gêʾ is the word for "valley", and ṣalmāwet the word for "shadow of death". This translation is itself somewhat controversial, or at least difficult. It appears to be a compound noun, but:

Modern lexicographers and commentators tend to take it as the latter, see e.g. the entry in Brown-Driver-Briggs, p. 853: 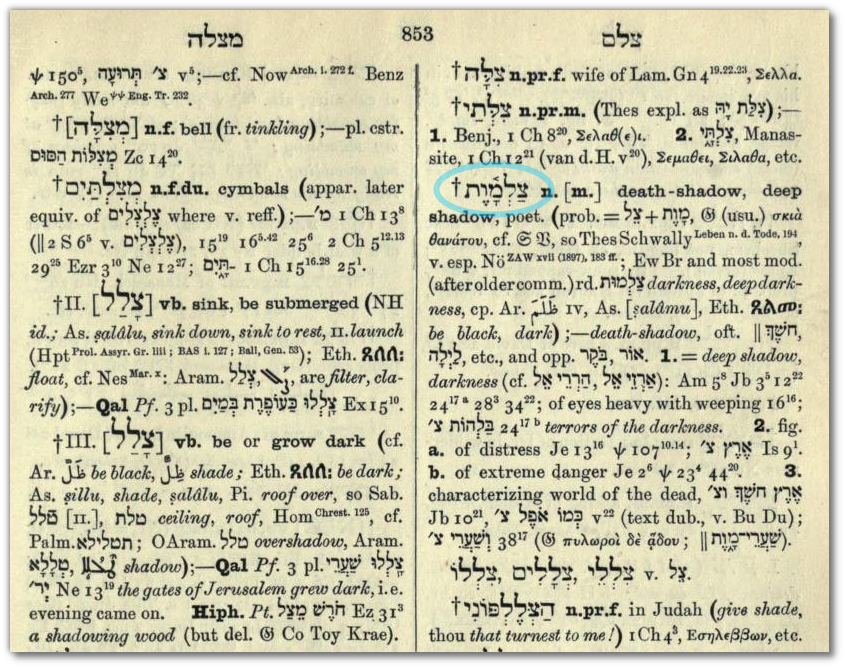 In Ps 23:4, the Greek translator, however, took it as the former: ἐν μέσῳ σκιᾶς θανάτου, literally "shadow of death". Even the much more "liberal" translator(s) of Job and Isaiah used this equivalence.

The usage of the word is somewhat broader that Ps 23:4, of course. It appears 17× in the Hebrew Bible (see the entry of BDB for references: the little dagger symbol, †, indicates that all occurrences have been cited in the entry). Note especially the frequent use in Job (8×).

In biblical terms, then, this is consistently evocative language for the place of danger, which is especially the place where God's absence is felt (cf. e.g., Jeremiah 2:6).

Later interpreters took it in different directions. Rashi, for example, explained it in terms of of the "wilderness of Ziph", in 1 Sam 23:13, 28 [as given by Rashi, presumably because they set out David's predicament and escape, but see vv. 14-15 and 24 for mention of the wilderness of Ziph]. This is to take Psalm 23 (a "psalm of David") in biographical terms, and relate this language to a particular episode in David's life when he was under threat of death.

In quite different terms, it is part of the allegorical landscape of John Bunyan's Pilgrim's Progress where Pilgrim faces Apollyon in the valley.

4
Is the death of the pious precious in the eyes of God?
10
What is the usage in Psalm 23 of “through” the valley of the shadow of death?
5
What is the meaning of “The Death of the Son” at the beginning of Psalm 9?
0
In Psalm 27:6 is there a historic or prophetic reason David is confident that “now” is when he will triumph?
2
In Psalm 90:1 what does Moses mean when he says “you have been our dwelling place”?
2
In light of Proverbs 24:17 , how would we go about justifying or reasoning Psalm 54:5-7 claim of being satisfied with enemies' destruction?
4
In Psalm 76:10, does God tactfully use the wrath of his enemies to Glorify Himself, and finally destroys the remainder?
2
Psalm 20:6 - prophecy who is 'His anointed' that is saved?